13 Powerful Essays From Progressive People Of Faith In 2016 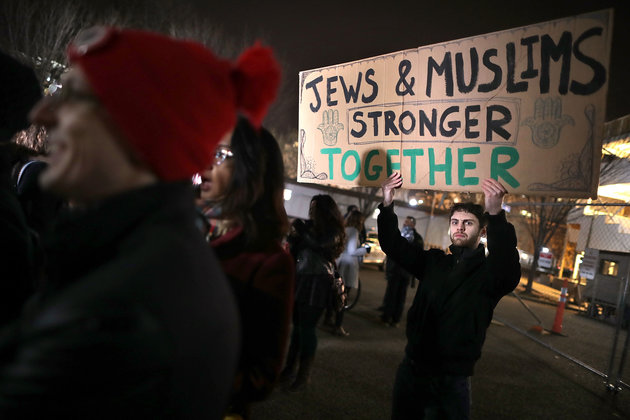 About 60 demonstrators gather outside the White House to protest the anti-Muslim policy proposals of President-elect Donald Trump and to stand ‘with Muslims against Islamophobia and racism’ December 21, 2016 in Washington, DC. Organized by Jewish Voice for Peace, protesters heard messages of tolerance and interfaith solidarity from ministers, rabbis and imams.

Required reading for people of faith who are going into 2017 fighting.

It’s been a tough year for America’s progressive faith community.

The religious left in this country is a racially and theologically diverse contingent of people who see social justice and progressive social values as an important part of their faith practice. The movement traces its legacy back to the Civil Rights Era and to the development of liberation theology ― the idea that people of faith must always stand up for the poor, oppressed, and marginalized of society.

Many on the religious left felt betrayed this year as they watched religious people rally behind a president-elect who has helped fuel hatred towards women, Muslims, Latinos, refugees, and the disabled. Progressive faith leaders witnessed rising intolerance against Muslims and Jews, and saw reports of churches, mosques synagogues being threatened or desecrated.

But that doesn’t mean they’ve stopped fighting the good fight.

From gathering to pray for the earth at Standing Rock to showing up at rallies to protest bigotry in all forms, progressive faith leaders spent 2016 organizing and building interfaith coalitions. They’ve spoken out in action and with their words, holding Americans of all faiths accountable to the core values of love and peace that all religious traditions share.

We took a look back at the great writing that has emerged from this difficult year. While this list is by no means not exhaustive, we hope the pieces listed here capture the struggles the progressive faith community has faced, as well as their determination to keep up the fight in 2017.

Here are 13 important pieces from Huffington Post bloggers and other writers that should be required reading for progressive people of faith who want to grow stronger and love harder next year.