As a US traveller, I sported a Canadian flag patch under Bush. Time to dust it off 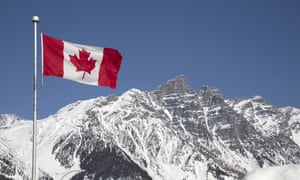 I began traveling solo as a college student during the Bush years. Before I packed up my backpack and headed to a study abroad program in Madrid, my best friend gave me a gift: a Canadian flag patch.

In those days, it wasn’t just trendy to pretend to be Canadian: it was a way to avoid inevitable discussions about one’s voting record (“I swear, I didn’t vote for that guy! He’s not my president!”) and having to answer for things the president of your country had done, even if you didn’t agree with them. I have memories of commiserating in hostel bars with Italians whose experiences under Berlusconi made them sympathetic to my time living in George W Bush’s America.

For the past eight years, though, I associated “pretending to be Canadian” with a sort of foolish innocence about the days when I wasn’t proud of my country. That was before the Obama years, before we had a president with gravitas and class representing us on the world stage, before I had free birth control guaranteed by my health insurance, before the Lilly Ledbetter Act. Until Donald Trump – it still pains me to type this – was elected president earlier this month, those heady post-9/11 days seemed like a hilarious historical relic.

Not so, now. Donald Trump’s first forays into foreign policy this week have made me, as a Jew, a woman and an American, deeply concerned about the fate of my nation, not just eager to feign Canadianness again but to go there on a longer-term basis. Not only has Trump threatened to compromise many of the rights and values we treasure – he has managed before even taking office to make us look foolish on the global stage, from bringing his daughter into a meeting with the head of Japan to operating in such disarray that Theresa May reportedly had to reach him by calling the Trump Tower switchboard, and the Australian prime minister got his cell number from golfer Greg Norman.

I’m clearly not the only one whose thoughts have been drifting northward: Canada’s official immigration site crashed on election night. It seems like a no-brainer: would you like a president who boasts of “grabbing women by the pussy” or a prime minister who actively calls himself a feminist and encourages others to do the same?

I’d grown up hearing jokes about silly accents and humming along to the South Park song Blame Canada, but visiting the country over the years, from Victoria to Ottawa (yes, even Ottawa), only made me like it more. It wasn’t just the maple candy and the superior views of Niagara Falls. It was also the irresistibly sexy lure of single-payer healthcare and social safety nets.

Who wouldn’t want to claim Canadianness? Gone are the days when Canada was “America’s hat”, the dorky, awkward kid brother who always played second fiddle to the United States. Now, Canada is the kinder, progressive alternative to a country whose leader-to-be has threatened to make lists of Muslims and build a wall along the Mexican border.

So, buy some Canadian flag patches while you still can so, at the very least, we can all spend the next four years pretending to hail from a place where our president doesn’t make us queasy.

I’m already thinking two steps ahead. I’ve signed up for Maple Match. I’ve practiced pronouncing “Toronto” like a local (drop that N). I’ve even learned French in case it can win me points toward immigrating to Quebec. Téléphone-moi, maris potentiels!