27 Times Trump has been insulting to women 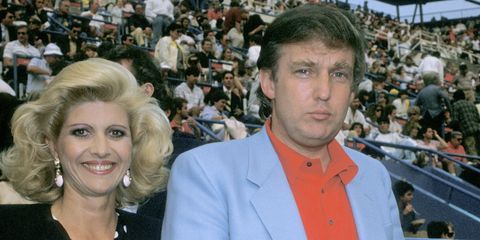 Trump reminded us of this when he unleashed a war of words on Fox News host Megyn Kelly, questioning her professionalism and suggesting she treated him unfairly at a Republican debate last year because she was menstruating. (Trump later denied that suggestion.)

Kelly had asked Trump about his stance on women, saying, “You’ve called women you don’t like fat pigs, dogs, slobs, and disgusting animals.” Trump tried to cut her off, insisting he’s only said those things about Rosie O’Donnell.

Kelly and Trump have “agreed to disagree,” according to Kelly. And Trump told Face the Nationthat he’d be “phenomenal to women.”

But Kelly was right to question him on his stance on the women. The leading Republican candidate has repeatedly insulted women. Here are 20 instances:

Why I Became a Clinton Campaign Intern

Then he tweeted this awful meme:

Cruz maintained that his campaign had nothing to do with the ad and thankfully did not retaliate with any sexist memes of his own.

Woman Wears “Grab My P***y” Shirt at a Trump Rally

“50 Shades of Grey” Is Now Part of the Election

He then implied that the two anchors are dating, and called Brzezinski “insecure.”

Clinton Besting Trump Is So Satisfying

ICYMI: Here’s Trump, the GOP presidential nominee, suggesting the People reporter wasn’t hot enough for him to be inappropriate with:

Categories: The Muslim Times, US Politics, US PRESIDENT