Nazma Khanam’s death comes just weeks after two men were shot in the back of the head after midday prayers, rocking the Queens Bangladeshi community 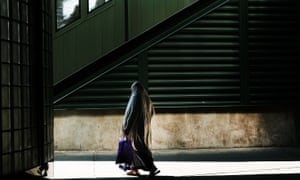 The NYPD has no leads on who the killer is or what the motive may be, but many members of the Bangladeshi community at the funeral and the wider Muslim community were convinced this was a hate crime. Photograph: Spencer Platt/Getty Image

Hundreds of people gathered at a mosque in Queens, New York, on Friday to mourn a 60-year old Bangladeshi woman murdered in what they say was a hate crime.

“I saw my mother’s dead body two days ago,” said Naimul Khan, son of the slain Nazma Khanam. “It was very difficult for me and my family,” an emotional Khan added.

Khan was speaking at a press conference held after a prayer service at the Jamaica Muslim Center where hundreds had gathered. Nazma Khanam’s husband and widower Shamsul Alam Khan weeped into the microphone and implored those gathered to pray for his wife.

Khanam,  60, was killed a few feet from her 75-year old husband on Wednesday night after the two were walking back from a souvenir shop. Khan has asthma so he walked behind his wife, who was a teacher in Bangladesh and moved to New York a few years ago. An unidentified man then ran up and stabbed Khanam multiple times.

“Somebody killed me!” she screamed, according to her husband. He found a four-inch blade sticking out of her body.

The New York police department currently has no leads on who the killer is or what the motive may be, but at the funeral many members of the Bangladeshi community and the wider Muslim community were convinced this was a hate crime.

Khanam’s death comes just weeks after Bangladeshi imam Maulama Akonjee, 55, and his friend Thara Uddin, 64, were shot in the back of the head in whatprosecutors described as an assassination as they walked home from midday prayers. The deaths rocked the Queens Bangladeshi community, sparking protests and calls for a hate crime investigation.

Emotions ran high at the mosque on Friday as speeches were frequently interrupted by chants of, “We want justice,” while community members held up signs saying “Love Not Hate.”

“This was not a robbery and though we do not know all the facts, the reality is this is happening too often,” said public advocate Letitia James to cheers from the crowd.

This was not a robbery and though we do not know all the facts, the reality is this is happening too often

James was one of many public officials who were in attendance, including representatives of Mayor Bill de Blasio, New York Governor Andrew Cuomo, members of city council, and other state and federal officials.

The two attacks against the Bangladeshi community in Queens have left American Muslims nationwide on edge and in fear that the national anti-Muslim sentiment is translating into repeated acts of violence.

According to a study by Georgetown’s Bridge Initiative, which analyzed FBI hate crime statistics, 2015 saw more incidents of hate crimes against Muslims than in any other year since 9/11.

In the same week the Imam and his friend were killed in Queens, a Lebanese man in Tulsa, Oklahoma, was killed by his neighbor who had repeatedly referred to him as a “dirty Arab” and a “Mooslem”, and attacked his family multiple times in the past.

“That’s four murders in less than a few weeks, let alone the numerous hate crimes and assaults that have taken place throughout this country and much of Europe,” said Khalid Latif, the executive director and chaplain for the Islamic Center at the New York University and the chaplain at the NYPD. “Anti-Muslim sentiment is at an all-time high, and we will continue to hear news like this until those who have the ability to speak up and out will start to do so both with words and actions.”

How best to respond to the increase in hate has been a flashpoint for Muslims in New York. Several of the funeral attendees held up signs calling for an increased police presence, and some even shouted for “more security” during the press conference following the janazah prayer. 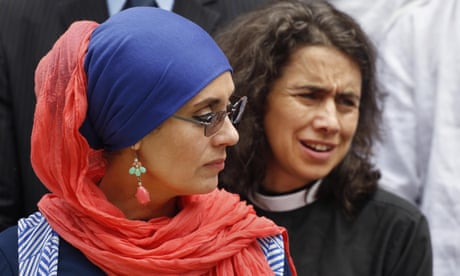 Khanam’s nephew is an NYPD transit officer and dozens of police were present at the funeral.

However, many Muslims have bad memories of the NYPD’s controversial surveillance program in New York, in which they infiltrated Muslim communities to spy and collect information.

Imam Abdul Baki, of the Islamic Cultural Center, took the microphone to encourage people to police their own community with civilian patrols and learn to stand up for themselves.

“The Muslim community can police itself,” he said.

The NYPD has been hesitant to label the murder of Khanam a hate crime, but the department’s hate crime unit is part of the investigation. It was originally considered an attempted robbery – as were the murders of Akonjee and Uddin – but family members have said that nothing was stolen.

“Our best guess is it was a psycho,” a high-ranking police official told the Daily News on Friday. “He ran at her. There was no conversation. This is a hard one to explain.”

Oscar Morel, 35, who was arrested for the murders of Akonjee and Uddin and charged with first-degree murder, pleaded not guilty on Thursday. Investigators have also yet to determine a motive behind that attack.

NYPD released surveillance video and issued a $10,00 reward for information leading to the arrest of the killer: a $2,500 reward upon arrest and indictment of her killer and $7,500 if the person is convicted.