Complaints are pouring in after the Sun’s columnist criticised the headscarf-wearing newsreader. He’s manipulating an already volatile anti-Muslim climate 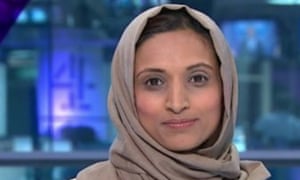 ‘As a British, Asian, Muslim woman who wears a headscarf, it makes me utterly proud to see Manji breaking through stereotypes and glass ceilings to front a major UK news agency.’ Photograph: Channel 4 News

If anyone had steam coming out of their ears this past week, it was Kelvin MacKenzie. The human pressure cooker could not contain his indignation at having to watch Channel 4 news reporter, Fatima Manji, cover the tragic attack in Nice. In an article for the Sun newspaper, MacKenzie wrote that “I could hardly believe my eyes” when he saw the British Muslim correspondent who wears a headscarf doing her job.

Not only is it malicious to single out a news reporter in this way, MacKenzie’s abhorrent rant attempts to equate Manji’s headscarf to terrorist atrocities and to female slavery: “Was it done to stick one in the eye of the ordinary viewer who looks at the hijab as a sign of the slavery of Muslim women by a male-dominated and clearly violent religion?” he spouted.

While the Sun’s “no comment” stance speaks volumes, MacKenzie’s article has prompted over 1,400 complaints to the Independent Press Standards Organisation (Ipso). Messages of solidarity for Manji poured in from the likes ofSayeeda Warsi, the NUJ, MPs, and Manji’s colleagues including Krishnan Guru-Murthy who tweeted: “Kelvin MacKenzie’s attack on @fatimamanji today was religious hatred and a disgrace not just to journalism but to our wonderful nation.”

In Manji’s own brilliant rebuttal to MacKenzie’s hateful article, she says: “It’s dangerous to regard Mr MacKenzie and those who echo his Islamophobic sentiments as mere pantomime villains. Their soapbox allows them to spread their ill-informed, irresponsible and malevolent invective to millions of readers. Racist and Islamophobic rhetoric has real consequences – lives have been lost and shattered in our own country.”

Manji is right to bring MacKenzie and his cronies to account. His anti-Muslim tripe was not an isolated incident of bigotry. He knew exactly what he was doing – which is to manipulate an already volatile climate in which anti-Muslim sentiment is festering like an ulcer. This trend of hate-filled rhetoric is stirring up confused grievances and twisting them into overt prejudice, all the while making people who are “different” feel less safe in their own country. 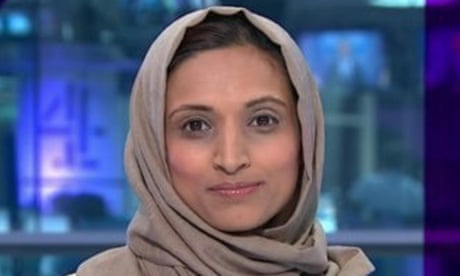 Tensions have been further escalating following recent global terrorist atrocities and post-Brexit Britain has seen a sharp increase in hate crime – the Met received almost 600 reports within a week of Britain deciding to leave the EU. In a study published last year, there were an estimated 222,000 hate crimes on average per year in England and Wales. The most common motivating factor? Race. This is exactly the reason why hateful propaganda needs to be challenged robustly head-on.

MacKenzie’s contempt for Manji is also contempt for integration, diversity and empowerment – all the buzzwords for British values. It makes me wonder what kind of Britain he actually wants.

As a British, Asian, Muslim woman who wears a headscarf, it makes me utterly proud to see Manji breaking through stereotypes and glass ceilings to front a major UK news channel. The fact Manji is the only woman in a headscarf in Britain to do so on national television is an achievement that should be celebrated. Channel 4 News is to be commended for pioneering this move, particularly as a mere 0.4% of British journalists are Muslim, according to study by City University.

In lumping together 23% of the global population, MacKenzie makes 1.6bn people culpable for the crimes of a deranged few, but I refuse to buy this culture of collective guilt, just as I refuse to let extremist rhetoric from all sides seize our narrative. I, along with many others, am tired of this toxic propaganda. I’m sick of the constant othering.

I’m hopeful there will be poetic justice amid all this, that it will only raise ratings for Manji’s news reports, and drive even more journalists from minority backgrounds to enter the mainstream. Whatever you look like, whatever background, whatever you wear on your head – a hijab or a sheitel, a turban or a kippah – the message should be: never feel limited. Be encouraged by the rights we all enjoy, and go for it. As the English philosopher John Stuart Mill said: “Genius can only breathe freely in an atmosphere of freedom.”