A French design engineer who was dismissed for wearing an Islamic headscarf should have been allowed to cover her head at work, a senior EU lawyer has said. 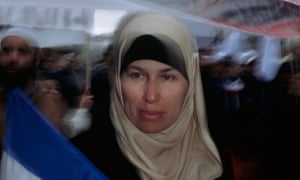 A French woman at a protest against the banning of headscarves in state schools. Photograph: Alamy

In an influential preliminary opinion, an advocate general at the European court of justice found in favour of Asma Bougnaoui who lost her job with Micropole SA, a French IT consultancy, in June 2009.

The advocate general has advised that the Muslim woman’s dismissal amounted to discrimination on the grounds of religion or belief.

Bougnaoui, who had worked for Micropole for a year, was fired without prior warning. After she had travelled to a meeting with clients at a big French insurance firm in Toulouse, the insurance firm complained to her superiors that her headscarf had “embarrassed” some of its staff working with her. The insurance company also demanded “no headscarf next time”.

Micropole asked Bougnaoui to comply with the request for no headscarf on her next visit. When she refused she was dismissed, and she challenged her dismissal in the French courts.

A French industrial tribunal and an appeals court compensated Bougnaoui over the fact that she was fired without prior warning but ruled that her dismissal was founded on a“real and serious cause”. Micropole had said it felt her wearing a headscarf hindered the company’s development because it meant the company could not properly interact with its client.

The French supreme court, before ruling on the case itself, had asked the European court of justice to examine the case. The ECJ was asked to advise on whether a requirement not to wear an Islamic headscarf when providing IT consultancy services could be regarded as a “genuine and determining occupational requirement”, therefore falling outside the scope of the prohibition on discrimination on the grounds of religion or belief provided for by a EU directive.

But advocate Eleanor Sharpston, one of the senior British members of the judiciary on the Luxembourg court, said the EU directive should be interpreted strictly and that Bougnaoui’s dismissal amounted to direct discrimination on those grounds.

The ECJ said there could be no exemptions from the EU directive preventing discrimination on the grounds of religion or belief. In a statement, it said: “The advocate general rejects the idea that a prohibition on employees wearing religious attire when in contact with customers of their employer’s business may be necessary for the protection of individual rights and freedoms necessary for the functioning of a democratic society.”

Sharpston said a company policy requiring an employee to remove her hijab when in contact with clients constituted unlawful direct discrimination.

France has some of the toughest legislation on headscarves in Europe. The veil, or niqab, is banned in all public spaces. In 2004, France banned girls from wearing simple headscarves, or hijab, in state schools – and all other religious symbols, such as crosses or turbans.

By law, French public sector workers, including hospital staff, must be seen as neutral and cannot show religious belief with an outward symbol. This means, for example, that some nurses who wear the hijab must take it off before arriving at work and put it back on when they leave. This law applies only to the public sector. A series of legal issues over private companies’ attitudes to staff wearing headscarves has led to recent discrimination complaints brought before French courts.

Sharpston said: “It seems to me that in the vast majority of cases it will be possible, on the basis of a sensible discussion between the employer and the employee, to reach an accommodation that reconciles adequately the competing rights of the employee to manifest his or her religion and the employer to conduct his business.

“Occasionally, however, that may not be possible. In the last resort, the business interest in generating maximum profit should then in my view give way to the right of the individual employee to manifest his religious convictions. Here, I draw attention to the insidiousness of the argument, ‘but we need to do X because otherwise our customers won’t like it’.

There the customer’s attitude may itself be indicative of prejudice based on one of the ‘prohibited factors’, such as religion, it seems to me particularly dangerous to excuse the employer from compliance with an equal treatment requirement in order to pander to that prejudice.”

Sharpston said the EU directive was intended “to confer protection in employment against adverse treatment (that is, discrimination) on the basis of one of the prohibited factors. It is not about losing one’s job in order to help the employer’s profit line.”

Advocate general opinions are usually followed when the ECJ finally delivers its subsequent full judgment. ECJ rulings are legally binding on all EU member states and will be enforceable in the UK until British withdrawal has finally been achieved.

Boris Johnson criticised the powers of the ECJ during the EU referendum campaign.