Will America’s Olympic Flag Bearer Be Wearing a Hijab? 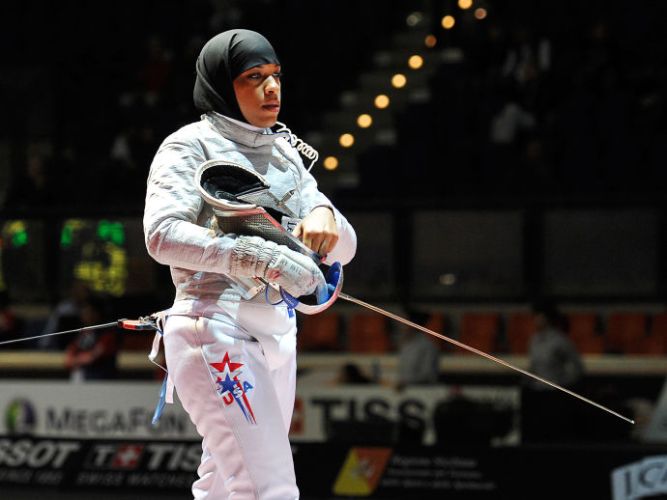 Growing up, in Maplewood, New Jersey, where her father was a narcotics detective and her mother a special-education teacher, Ibtihaj Muhammad competed in softball, tennis, volleyball, and track. “In our family, you didn’t have a choice of whether to play sports,” she told me. “You only had a choice of what sports you played.” The family philosophy was that athletics enabled the four girls and one son to better confront discrimination.

Double discrimination, actually. “We’re African-American and we’re Muslim,” Ibtihaj’s mother, Inayah Muhammad, told me. “I’m an educator. I know how important it is for kids to be a part of the community. Sports helps them integrate. Families and fans always unite around teams.”
But, for the girls, team uniforms didn’t cover hair or bodies, as required by their faith. Instead of shorts, Ibtihaj (whose name means “Joy”) wore baggy sweatpants for tennis and track, long loose shirts and leggings for volleyball, and a head scarf, known as a hijab, for them all. She was frequently teased, sometimes harassed. Then, when she was twelve, she and her mother happened to drive past a local high school and saw, through the windows of the cafeteria, students engaging in an unfamiliar sport.

“I didn’t know what it was,” her mother recalled. “But I knew how they were dressed.” The girls wore full-body suits, and helmets that covered their hair. The sport was fencing, and Ibtihaj—her friends call her Ibti—began competing at thirteen. “I’m not sure I fell in love with it at first,” she said. “But I’m really goal-oriented. And when you come from a large family you have to be creative about getting scholarships to college.” She helped her high-school team win two state championships. She still had a hard time winning public acceptance, however.

“When I was young, fencing was a white sport in New Jersey,” she said. “Not many people looked like me. There were no role models. When I competed in local tournaments, there were often comments about me—being black, or being Muslim. It hurt.” She was in advanced-placement English class, in high school, on September 11, 2001. After the second tower of the World Trade Center fell, teachers were instructed to turn off the televisions. Her brother and other Muslim boys were taken from their classrooms to another part of the school. “We still don’t know why,” she told me. “That night, there was panic in my house.”

Her mother recalled, “9/11 impacted everyone. The children were ostracized and targeted. People shouted at me when I drove down the street.”

For college, Muhammad looked at ten universities with fencing programs that could provide financial support. She ended up on a partial academic scholarship at Duke, where she specialized in the sabre and was named All-American three times. A torn hand ligament prevented her from qualifying for the 2012 Olympic team, but she recovered and has since won several medals, including a team silver medal at a World Cup event, in 2013, and a team gold medal at the World Fencing Championship in Russia, in 2014. In January, she qualified for this year’s Summer Olympics, in Rio de Janeiro. She’ll be the first Muslim American Olympian to compete wearing a hijab.