New Islamic airline takes to the skies in Malaysia 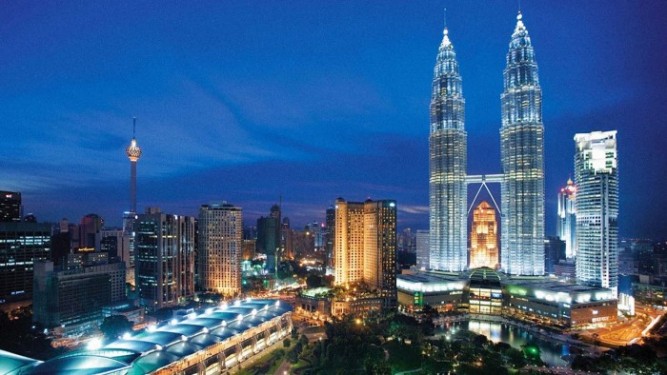 The Hindu founders appear to be taking up a business opportunity arising, in some measure, from last year’s Malaysia Airlines woes. Flights begin with a prayer, passengers are served halal meals, and female flight attendants abide by a dress code.

A Rayani Air flight crew member, left, shares a light moment with passengers aboard one of the company’s Boeing 737s, while on the ground Tuesday at Kuala Lumpur International Airport.

KUALA LUMPUR, MALAYSIA—The short domestic flight from Kuala Lumpur, Malaysia’s biggest city, begins with a recital of Prophet Muhammad’s supplication before his travel. The passengers — most of them Muslims — cup their hands, as a crew member murmurs a short prayer over the loudspeaker just before takeoff.

Malaysia’s Rayani Air took to the skies over the weekend with a clear bailiwick. It is the country’s first Islamic airline, offering flights that adhere to Islamic rules, including prayers, no serving of alcohol or meals with pork, and a strict dress code for Muslim female flight attendants.

The idea for Rayani Air grew out of much-publicized complaints by conservative Muslims who believed that two major air disasters for the national Malaysia Airlines — Flight 370 that went missing in March 2014 and Flight 17 downed a few months later over Ukraine — were caused by Allah’s wrath. Their solution: Airlines must adopt strict Islamic customs to avoid divine retribution.

The reaction to the disasters, and the creation of the airline that operated its inaugural flight on Sunday, is an example of rising hard-line Islamic values in Malaysia, where Muslims account for about 60 per cent of the country’s 30 million people.

“We are answering the call of many Malaysians who wanted an Islamic airline,” Rayani’s managing director, Jaafar Zamhari, told The Associated Press. “We are not talking about being a holy airline or flying to holy destinations. We just want to provide an alternative to travellers, but we are open to all races and religions.”

Ironically, the people who answered the call of conservative Islam and started Rayani Air are Hindus, perhaps an indication that a business opportunity knows no religious boundary. The founders of the airline, which currently flies to three domestic destinations using two Boeing 737s, are Ravi Alagendrran and his wife, Karthiyani Govindan. They used parts of their first names for the airline’s name.

Alagendrran or his wife couldn’t be immediately reached for comments, but in remarks to local media, he had said that “anyone wishing to travel in a modest and alcohol-free environment will feel right at home.”

On a 55-minute flight Tuesday (delayed by two hours) from Kuala Lumpur to the northeastern city of Kota Baru, more than 100 passengers were greeted by Muslim female flight attendants wearing black headscarves, long pants and lime-green jackets. A prayer was recited before takeoff and passengers were served halal food, where animals are slaughtered according to Islamic procedures.

At least one passenger said she chose the airline because of its Islamic credentials.

Rayani Air is the fourth Islamic airline in the world after Royal Brunei Airlines, Saudi Arabian Airlines and Iran Air.

Jaafar said that male and female passengers are not segregated, and that there is no dress code for travellers.

“Even if they come in shorts, they are most welcome,” he said. “We respect the differences among us.”