Do Christians, Muslims and Jews worship the same God?

We all pray to and believe in God the Father in the Christian tradition and so did Jesus. 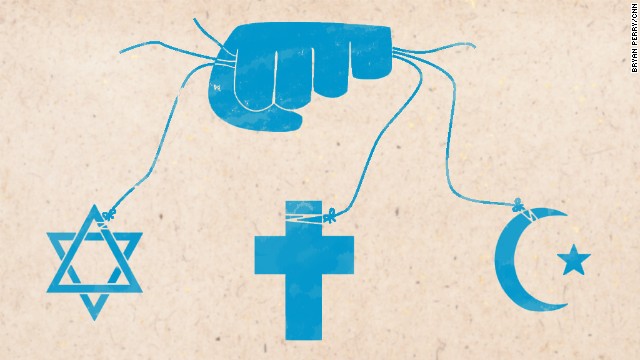 (CNN) – Pope Francis surprised Israeli and Palestinian leaders last month when he invited them to a special prayer ceremony at the Vatican this Sunday – not least because religion has often been the source, not the salve, of the region’s conflicts.

Still, Pope Francis offered his “home” – the Vatican – as the perfect place to plea for some divine assistance, and Israeli President Shimon Peres and Palestinian Authority President Mahmoud Abbas dutifully agreed to attend.

“The Pope has placed it in this perspective: Prayer is like a force for peace,” Vatican Secretary of State Archbishop Pietro Parolin told Vatican Radio.

“We hope that there, where human efforts have so far failed, the Lord offers to all the wisdom and fortitude to carry out a real peace plan.”

But Sunday’s special ceremony at the Vatican raises an interesting question: When Francis, Peres and Abbas bow their heads in prayer, will they be talking to the same God?

After all, Jews, Christians and Muslims all trace their faiths back to a fellow named Abraham, whom they all claim was chosen for special treatment by the Almighty.

The “same God” question is one theologians have hammered at for as long as there have been enough religions for the query to make sense.

The question is hardly academic, though. In fact, a number of politicians, religious leaders and scholars have expressed hope in recent years that a convincing answer on the God question might dampen the violence committed in His name.

In the introduction, Volf explained why the title question matters:

“To ask: ‘Do we have a common God?’ is, among other things, to worry: ‘Can we live together?’ That’s why whether or not a given community worships the same god as does another community has always been a crucial cultural and political question and not just a theological one.”

His book on this subject is titled “God Is Not One: The Eight Rival Religions That Run The World.”

“For more than a generation we have followed scholars and sages down the rabbit hole into a fantasy world where all gods are one … In fact this naive theological groupthink – call it Godthink – has made the world more dangerous by blinding us to the clash of religions that threaten us worldwide.”

In the world of politics, President George W. Bush asserted the unity side of the argument more than once in the years after the 9/11 attacks – often as a way to deflect accusations that America was at war with Islam.

Bush told Al Arabiya television, “I believe there is a universal God. I believe the God that the Muslim prays to is the same God that I pray to. After all, we all came from Abraham. I believe in that universality.”

“We believe in the same God, the one God, the living God, the God who created the world and brings his creatures to their perfection,” he first said in a speech to Muslims in Morocco in 1985.

Looking for a more recent example? Consider the plight of Vatican envoy to Malaysia.

Shortly after he arrived there last year, Archbishop Joseph Marino said that is was fine by him that Christian translations of the Bible into Malay use the word “Allah” for “God.”