Shirin Ebadi.  The Muslim Times has the best collection of articles on the theme of women rights especially the Muslim women rights

Shirin Ebadi (Persian: شيرين عبادى‎ Širin Ebādi; born 21 June 1947) is an Iranian lawyer, a former judge and human rights activist and founder of Defenders of Human Rights Center in Iran. On 10 October 2003, Ebadi was awarded the Nobel Peace Prize for her significant and pioneering efforts for democracy and human rights, especially women’s, children’s, andrefugee rights. She was the first ever Iranian to receive the prize.

In 2009, Ebadi’s award was allegedly confiscated by Iranian authorities, though this was later denied by the Iranian government.[3] If true, she would be the first person in the history of the Nobel Prize whose award has been forcibly seized by state authorities.[4]

Ebadi lived in Tehran, but she has been in exile in the UK since June 2009 due to the increase in persecution of Iranian citizens who are critical of the current regime.[5] In 2004, she was listed by Forbes magazine as one of the “100 most powerful women in the world”.[6]She is also included in a published list of the “100 most influential women of all time.”[7] 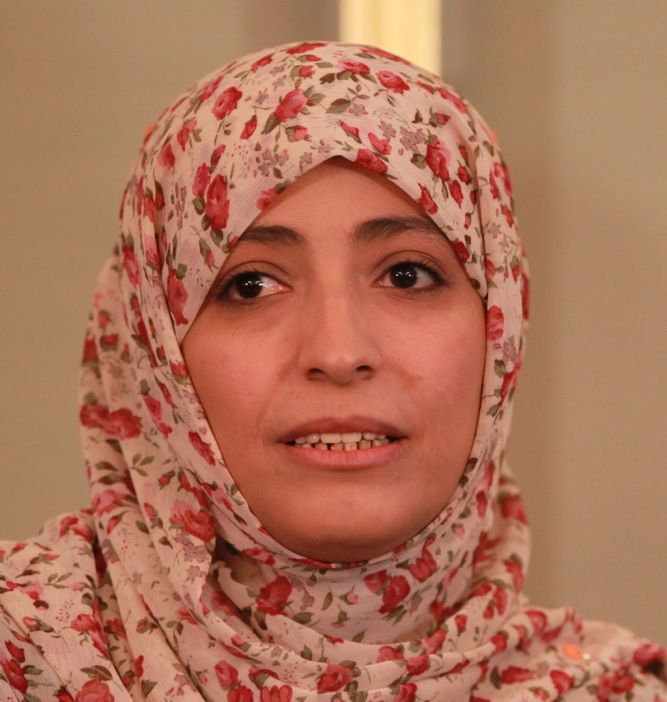 Tawakkol Abdel-Salam Karman (Arabic: توكل عبد السلام خالد كرمان‎ Tawakkul ‘Abd us-Salām Karmān; also Romanized Tawakul,[3] Tawakel[4][5][6]) (born 7 February 1979[6]) is a Yemenijournalist, politician and senior member of the of Al-Islah political party (the Islamist and Yemeni offshoot of the Muslim Brotherhood[citation needed]), and human rights activist. She leads the group “Women Journalists Without Chains,” which she co-founded in 2005.[3] She became the international public face of the 2011 Yemeni uprising that is part of the Arab Spring uprisings. She has been called the “Iron Woman” and “Mother of the Revolution” by Yemenis.[7][8] She is a co-recipient of the 2011 Nobel Peace Prize,[9] becoming the first Yemeni, the first Arab woman,[10] and the second Muslim woman to win a Nobel Prize and the second youngest Nobel Peace Laureate to date.[11]

Karman gained prominence in her country after 2005 in her roles as a Yemeni journalist and an advocate for a mobile phone news service denied a license in 2007, after which she led protests for press freedom. She organized weekly protests after May 2007 expanding the issues for reform.[3][12] She redirected the Yemeni protests to support the “Jasmine Revolution,” as she calls the Arab Spring, after the Tunisian people overthrew the government of Zine El Abidine Ben Ali in January 2011. She has been a vocal opponent who has called for the end of President Ali Abdullah Saleh‘s regime.[13] 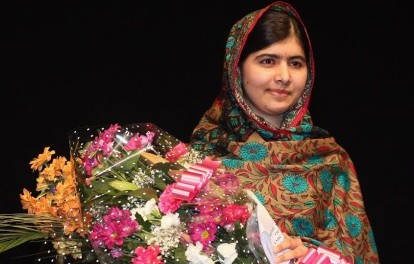 Malala Yousafzai poses for her Nobel Prize in October 2014

Malala received the Nobel Prize just last week and details about her are fresh in memory and their is healthy debate going on in Pakistan, if it was a well deserved honor or not?

Malala Yousafzai (Pashto: ملاله یوسفزۍ‎ [məˈlaːlə jusəf ˈzəj];[1] Urdu: ملالہ یوسف زئی‎ Malālah Yūsafzay, born 12 July 1997)[2] is a Pakistani activist for female education and the youngest-ever Nobel Prize recipient.[3] She is known mainly for human rights advocacy for educationand for women in her native Swat Valley in the Khyber Pakhtunkhwa province of northwest Pakistan, where the local Taliban had at times banned girls from attending school. Yousafzai’s advocacy has since grown into an international movement.

Her family runs a chain of schools in the region. In early 2009, when she was 11–12, Yousafzai wrote a blog under a pseudonym for the BBC detailing her life under Taliban occupation, their attempts to take control of the valley, and her views on promoting education for girls in the Swat Valley. The following summer, journalist Adam B. Ellick made a New York Times documentary [2] about her life as the Pakistani military intervened in the region, culminating in the Second Battle of Swat. Yousafzai rose in prominence, giving interviews in print and on television, and she was nominated for the International Children’s Peace Prizeby South African activist Desmond Tutu.

All these part time or full time Hijabis remind me of another Hijabi, 1900 years before Nobel Prize was inaugurated, who was an exemplary peacemaker and donned a Hijab all her life, without exception and no artist has ever dared to present her without a Hijab.

Mother Mary is always with a Hijab in artist’s imagination