Dubai to Build Biggest Mall On the Planet

The world’s first temperature-controlled city’: Dubai to build biggest mall on the planet, complete with theme park, five miles of covered streets and 100 hotels and apartments

By SARAH GORDON
PUBLISHED: 14:58 GMT, 6 July 2014 | UPDATED: 15:55 GMT, 6 July 2014
Dubai is already home to the tallest tower in the world, so it was just a matter of time until the glitzy emirate planned another record-breaking construction.
Its next project involves building the largest shopping mall om the planet, complete with climate-controlled streets, the world’s largest indoor theme park and 100 hotels and apartments.
In fact, the ambitious emirate has dubbed the project a ‘temperature-controlled pedestrian city’. 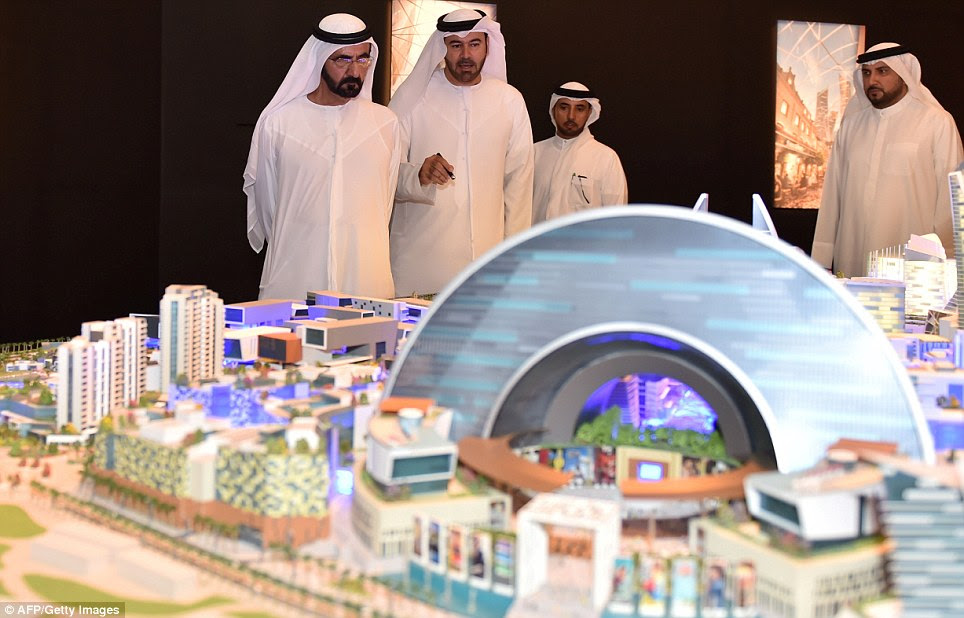 +5
Grand plans: Sheikh Mohammed Bin Rashid al-Maktoum (L), ruler of Dubai, unveiled the model of the ambitious mall project
Occupying 48 million square feet, the Mall of the World will also contain health resorts, theatres, a Celebration Steet modelled on the Ramblas boulevard in Barcelona and ‘retail streets network’ that will stretch over four-and-a-half miles.
The grand project is part of Dubai’s bid to become a year-round tourism destination, despite soaring temperatures in summer that can reach nearly 50C.
The new mall, which will be a city-within-a-city, will be the emirate’s chance to attract visitors even in the height of the summer, by providing a completely climate-controlled experience. 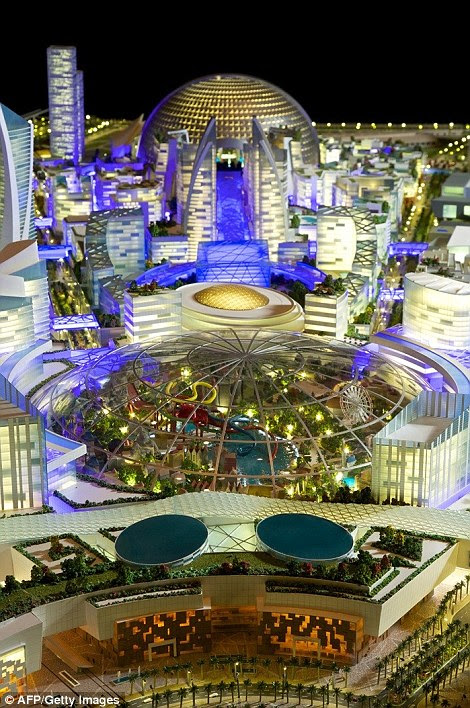 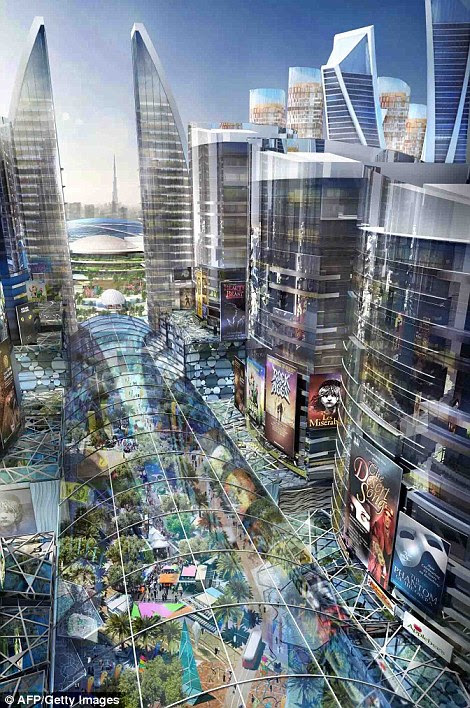 +5
Climate-controlled: The eight million square foot shopping centre will be housed under a dome, while the streets will also be covered so that tourists can shop without getting too hot in the relentless heat of the summer months
The shopping mall itself will occupy eight million square feet, housed below a glass dome, with other attractions extending beyond the central shopping area.
In the cooler winter months, the dome will open, allowing people to shop in the fresh air, closing as the summer heats up.
It is thought the huge construction will attract 180 million visitors a year and developers hope it will secure Dubai’s futures as a tourism hub. 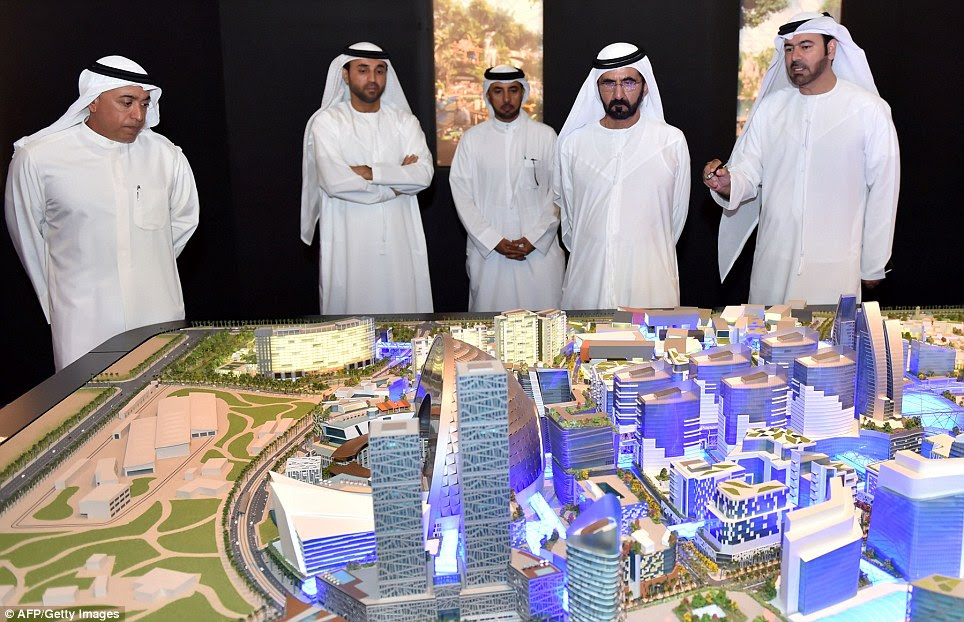 +5
Tourism boon: Sheikh Mohammed Bin Rashid al-Maktoum (second right) hopes the development will urn Dubai into a year-round destination
The emirate’s ruler and vice president of the UAE Sheikh Mohammad Bin Rashid Al Maktoum, said: ‘This project complements our plans to transform Dubai into a cultural, tourist and economic hub for the two billion people living in the region around us; and we are determined to achieve our vision.
‘The growth in family and retail tourism underpins the need to enhance Dubai’s tourism infrastructure as soon as possible.
‘We are confident of our economy’s strength, optimistic about our country’s future and we continue to broaden our vision.’
The supersized mall will be built near the existing Mall of the Emirates, already one of the largest shopping centres in the world, with its own indoor ski slope. 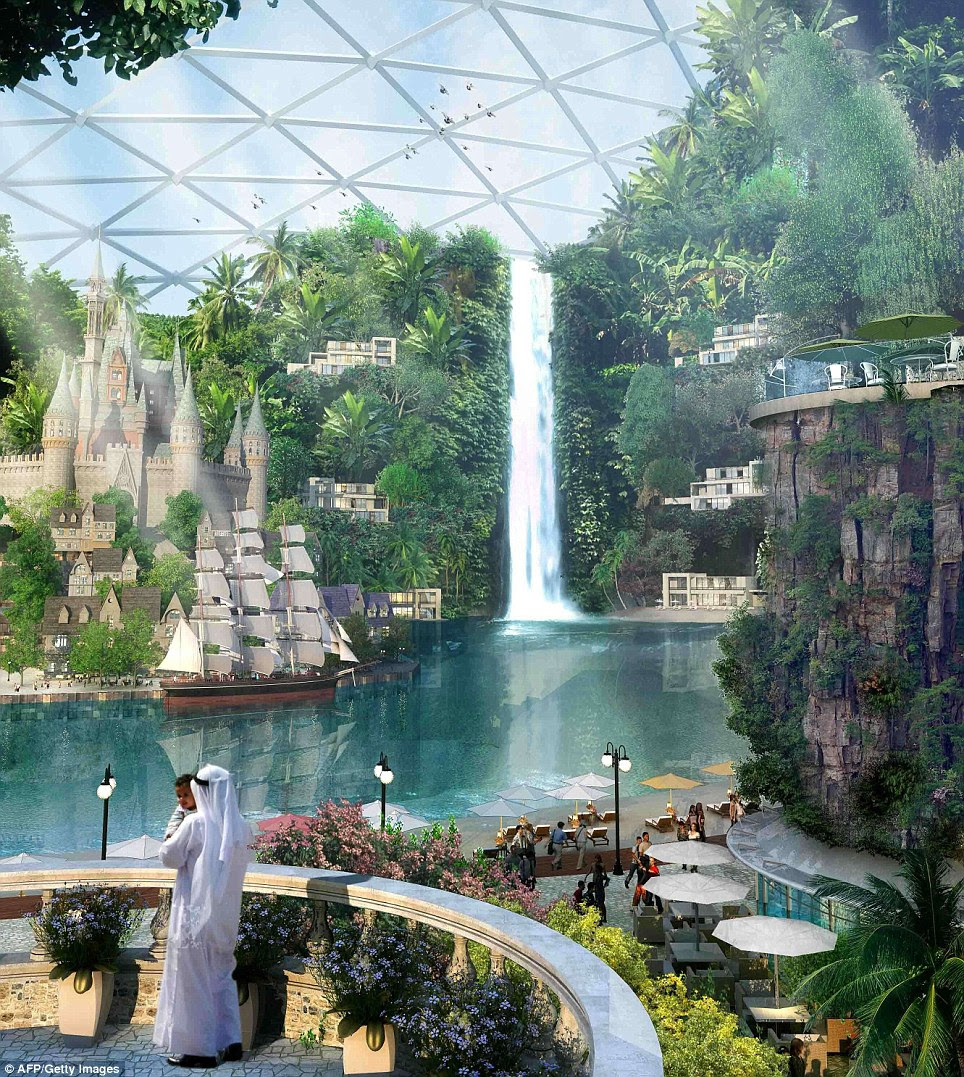 +5
City within a city: The mall will offer everything visitors and locals needs so that they don’t have to venture outside in the searing heat
It will also be a short drive to the world’s tallest tower, the Burj Khalifa, which stands at 2,717ft.
The idea is to create a cultural area, with theatres hosting shows at West End and Broadway levels, as well as a network of streets that will be entirely climate controlled.
Sheikh Mohammad stated: ‘Our ambitions are higher than having seasonal tourism – tourism is key driver of our economy and we aim to make the UAE an attractive destination all-year long.
‘This is why we will start working on providing pleasant temperature-controlled environments during the summer months.’