Saudis Back Syrian Rebels Despite Risks

Saudis Back Syrian Rebels Despite Risks 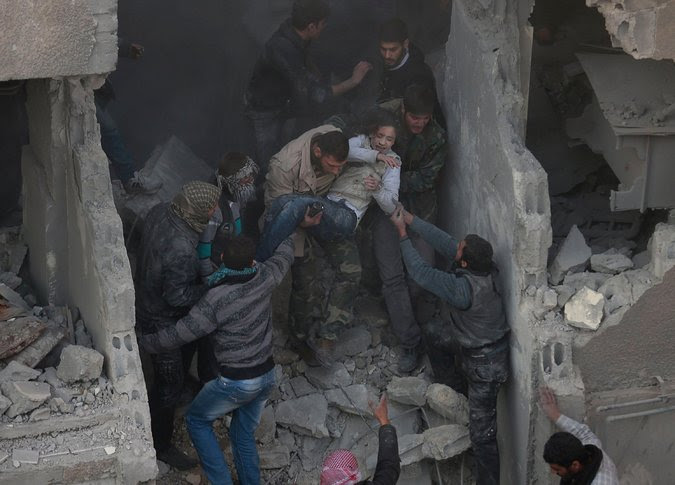 In Damascus on Tuesday, men helped a wounded girl who survived what activists said was an airstrike by forces loyal to President Bashar al-Assad of Syria. Bassam Khabieh/Reuters

RIYADH, Saudi Arabia — On his eighth trip to fight with the rebels in Syria, in August, Abu Khattab saw something that troubled him: two dead children, their blood-soaked bodies sprawled on the street of a rural village near the Mediterranean coast. He knew right away that his fellow rebels had killed them.
Abu Khattab, a 43-year-old Saudi hospital administrator who was pursuing jihad on his holiday breaks, went to demand answers from his local commander, a notoriously brutal man named Abu Ayman al-Iraqi. The commander brushed him off, saying his men had killed the children “because they were not Muslims,” Abu Khattab recalled recently during an interview here.
It was only then that Abu Khattab began to believe that the jihad in Syria — where he had traveled in violation of an official Saudi ban — was not fully in accord with God’s will. But by the time he returned to Riyadh, where he now volunteers in a program to discourage others from going, his government had overcome its own scruples to become the main backer of the Syrian rebels, including many hard-line Islamists who often fight alongside militants loyal to Al Qaeda. 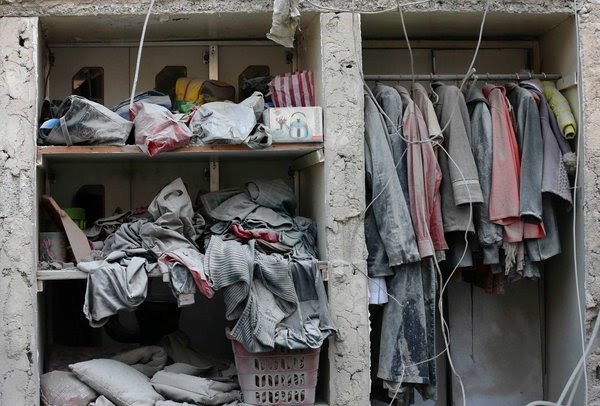 Clothes covered in dust after the airstrike. Saudis are prohibited from going to Syria for jihad, but the ban is not enforced. Bassam Khabieh/Reuters

The disillusionment of Abu Khattab — who asked that his full name be withheld because he still fears retribution from jihadists — helps illustrate the great challenge now facing Saudi Arabia’s rulers: how to fight an increasingly bloody and chaotic proxy war in Syria using zealot militia fighters over whom they have almost no control.
The Saudis fear the rise of Al Qaeda’s affiliates in Syria, and they have not forgotten what happened when Saudi militants who had fought in Afghanistan returned home to wage a domestic insurgency a decade ago. They officially prohibit their citizens from going to Syria for jihad, but the ban is not enforced; at least a thousand have gone, according to Interior Ministry officials, including some from prominent families.
But the Saudis are also bent on ousting Syria’s president, Bashar al-Assad, and his patron, Iran, which they see as a mortal enemy. Their only real means of fighting them is through military and financial support to the Syrian rebels. And the most effective of those rebels are Islamists whose creed — rooted in the puritanical strain of Islam practiced in Saudi Arabia — is often scarcely separable from Al Qaeda’s.
Abu Khattab, a slight-figured man with bulging eyes and the scraggly beard of an ultra-orthodox Salafist Muslim, embodies some of these paradoxes. He now volunteers here once a week to warn young men about the false glamour of the Syrian jihad at the government’s rehabilitation center for jihadists. “There is a shortage of religious conditions for jihad in Syria,” he said. Many of the fighters kill Syrian civilians, a violation of Islam, he added.
But as Abu Khattab talked about Syria, his own convictions seemed scarcely different from those of the jihadists he had carefully denounced (two officials from the Interior Ministry were present during the interview). He made clear that he considered Shiite Muslims and Mr. Assad’s Alawite sect to be infidels and a terrible danger to his own people.
“If the Shiites succeed in controlling Syria, it will be a threat to my country,” Abu Khattab said. “I went to Syria to protect my country.”
At times, his sectarian feelings seemed to outshine his unease about the excesses of some of his more extreme comrades. He did not deny that he had often fought alongside members of the Islamic State of Iraq and Syria, or ISIS, the brutal jihadist group affiliated with Al Qaeda.
Abu Khattab also mentioned proudly that he is no stranger to jihad. He fought as a teenager in Afghanistan (“With the government’s permission!”) and, a few years later, in Bosnia. He chose not to fight the Americans in Iraq “because there are too many Shiites there,” he said, with a look of distaste on his face.
Advertis

Yet this is a man who lectures inmates at the rehabilitation center every week about ethics and war. The center, like many Saudi institutions, has been somewhat embarrassed by the contradictions of Saudi policy with regard to Syria. Although the center incarcerates some men who have been arrested for trying to travel to Syria, last summer the nephew of Abdelrahman al-Hadlaq, its director, was killed while fighting there. His mother posted statements on Twitter saying she was proud of him.

More recently, the center suffered an even more stinging disappointment involving one of its best-known graduates, a reformed jihadist named Ahmed al-Shayea. He became famous in Saudi Arabia after surviving his own suicide bombing in Iraq in 2004, a bombing arranged by militants with Al Qaeda’s Iraqi branch.
Mr. Shayea was burned and disfigured, but after months in a hospital he emerged and proclaimed himself cured of the jihadist mind-set. He was known as the “living suicide,” and in 2009 an American author, Ken Ballen, devoted an entire chapter to a glowing portrait of him in his book, “Terrorists in Love.”
In November, Mr. Shayea slipped out of Saudi Arabia to Syria, where he is now fighting with the Islamic State of Iraq and Syria. He proudly trumpets his return to jihad on his Twitter feed, which features a picture of him clutching a rifle with his mangled hands.
The Saudi authorities say they have urged their citizens not to go to Syria, but cannot keep track of every Saudi who wants to go fight there. “We try to prevent it, but there are limits to what we can do,” said Mansour al-Turki, a spokesman for the Saudi Interior Ministry. “You cannot prevent all young men from leaving the kingdom. Many of them travel to London or other places, and only then to Turkey, and Syria.”