Muslims in interfaith bonds are proliferating. Imams willing to marry them are not.

One out of five Muslims is in an interfaith relationship, surveys suggest. But few imams are willing to conform the traditional Muslim wedding ceremony to their needs, couples say. 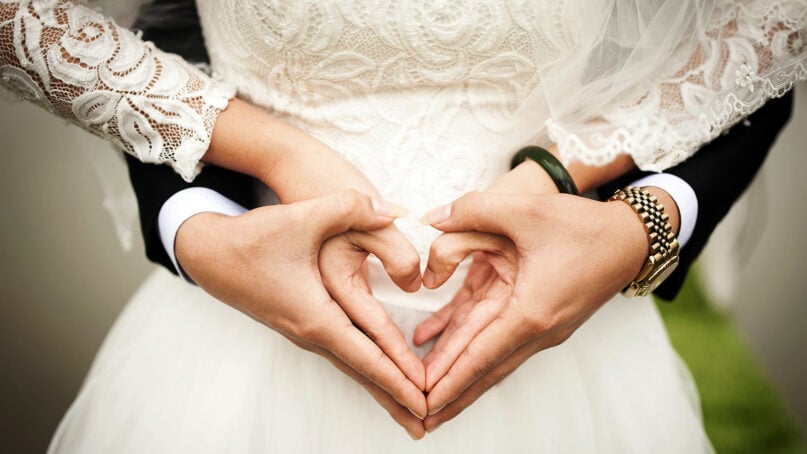 (RNS) — When Faiqa Cheema and Jeff Beale were planning their September 2021 wedding, it was important to Cheema that it include elements of the traditional ceremony of her Muslim faith, while also being meaningful for her husband, who was raised Baptist.

The couple’s path to their dream interfaith wedding turned out to be more complicated than they expected. While such unions are increasingly common, Muslim clergy have long frowned on marrying outside Islam, and Cheema and Beale struggled to find an imam who would officiate, much less adapt the Islamic ceremony, known as a nikah, to recognize Beale.

Many imams refused to marry them, Cheema said, because their bond is “against Islamic teaching and was a sin.” Beale was told to consider converting to Islam. “It’s not something that I wanted for him,” Cheema said.

Their search only came to an end when Cheema ran into the Instagram profile of Imam Imaad Sayeed. The founder of The London Nikah, a 10-year-old marriage agency that is now based in New Jersey, Sayeed has officiated some 250 Muslim interfaith weddings in the past five years, marrying couples from around the world.

Sayeed’s busy schedule, he said, is the result of being one of the few imams willing to conform the nikah to demographic reality.

According to a 2015 Pew Research Center survey, 79% of U.S. Muslims who are married or living with a partner are with someone of the same religion. That leaves 21%, presumably, in interfaith relationships.

The rules about intermarriage favor men, according to Imam Abdullah bin Hamid Ali, head of the Islamic Law program at Zaytuna College, a Muslim liberal arts school in Berkeley, California. Ali said the Quran is clear that men are allowed to marry non-Muslim women as long as their brides are “People of the Book” — Christians or Jews, both of whom recognize Abraham as their spiritual forefather, as Muslims do.

A Muslim woman, however, cannot marry a non-Muslim man unless he converts.

Whether the conversion is sincere or a matter of convenience, Ali said, is a question between the person and God. “If he converts because he really desires to be with his wife, we don’t know, we only know his testimony of faith, which is indicative of his conversion.” 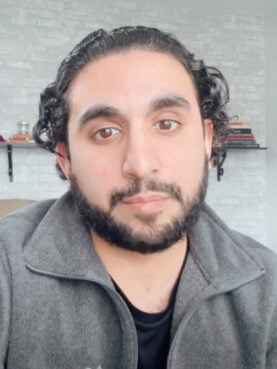 Another interfaith couple whom Sayeed married via a big-screen Zoom call last year said they, too, had consulted other imams who expected the husband’s conversion.

Sayeed, who thinks the Quran’s rules for marriage are open to other interpretations, sums up his attitude with the logic of love. “I believe that two people coming together and leading a life of commitment and love is a beautiful thing,” Sayeed said. “And why would God not bless that?”

“I don’t require anyone to convert, because conversion is something that happens from the heart,” he said. “We have to stay true to who we are, and I also don’t want to ostracize these couples from Islam,” Sayeed said.

Muslims for Progressive Values, a nonprofit organization, founded its Marriage Celebrancy division, offering wedding celebrations for couples with diverse religious backgrounds, in 2006 and claims on its website that its practices are “deeply rooted in both Islamic and democratic principles.” In 2020, MPV’s network of officiants celebrated about 75 weddings in the U.S. and, with partner organizations, another 20 in Canada, the U.K. and Europe.

Ani Zonneveld, founder and president of MPV, said that the way marriage is interpreted in Islam today is “cultural,” and it’s not prescribed in the Quran. While men are clearly limited to marrying within Abrahamic religions, women are advised to marry “believers,” Zonneveld said, but the term is ambiguous.

Zonneveld said there is also evidence of mixed-faith marriages in the hadith, the commentaries on the Quran and Muhammad’s teachings. Several Muslim faith leaders warned that Zonneveld’s scholarship is outside the mainstream.

Fifteen years ago, when MPV first started celebrating nikahs, interfaith weddings were as quiet as they were rare. “When it did occur, it would be a backyard wedding at the non-Muslim parents’ home,” Zonneveld said, with a supportive Muslim sibling or two in attendance. “Now,” she said, “interfaith weddings are large and extravagant, from a family-only event of 20 to a wedding in Cancun.”

Occasionally, couples will require a joint service with the clergy of another faith, adjusting the readings and some of the structural elements.

The procedure is easier with members of Abrahamic traditions but more challenging for Muslim-Hindu couples, Zonneveld said, as the structure of the Hindu wedding is more elaborate. “If the service I conduct is the only marriage service the couple has,” Zonneveld said, “then I make it a point to include the non-Muslim tradition and culture as well.”

Interfaith couples married by Sayeed say he has a knack for creating ceremonies that feel “natural,” “intimate” and “inclusive” and praised the way he blended their cultures.

Anybody can conduct a nikah ceremony, and historically, the most knowledgable person within the community — not necessarily an imam — performs it, Sayeed explained.

But the fact that Sayeed is a traditionally trained imam who has the Quran memorized helps some families accept the validity of an interfaith nikah. This is particularly true for parents of a woman who may be marrying a non-Muslim, Sayeed said.

Still, progress is halting. A woman from Boston who recently got married to a non-Muslim man said that, while “nobody protested her choice” and her family was “very nice” about the wedding, none of them showed up except for her brother and her friends, who were all very supportive.

Cheema, who said she grew up in “a very conservative Muslim household in Pakistan,” said they faced some resistance from her family. She said her parents still have a hard time accepting her relationship with Beale. But they attended the ceremony, and they enjoyed meeting Sayeed.

They celebrate Christmas and fast together for Ramadan, and when Cheema teaches Arabic to her two children by a previous relationship, he shows curiosity about it. Sometimes they even pray together.

“You can have a relationship like ours,” Cheema said. “You can still thrive and maintain your own faith and have your own identity.”

This article was produced as part of the RNS/IFYC Religious Journalism Fellowship Program.