Stepping through Bab-al-Yaman, the enormous gate allowing access into Yemen’s old walled city of Sana’a, was like stepping through a portal into another world. Tall, skinny buildings were crammed into the narrow lanes that connected lush fruit and vegetable gardens with the ancient souq where donkeys are still sold. I saw locksmiths mending enormous metal keys that open imposing wooden doors; a vendor selling prickly pears from a cart, and the local baker pulling fresh bread from a hot-glowing hole in the ground. In a tiny room, a camel trudged in tight circles powering a millstone crushing sesame seeds.

But despite all the visual stimulus, it was the architecture that dominated the scene.

Sana’a is filled with buildings unlike anywhere else in the world. At street level, where mud-brick walls are only broken up by large wooden doors, there was often not much to see. But when I looked up, I realised these slender buildings, some with just one or two rooms to a floor, soared high into the sky.

While the lower floors, at street level, were windowless due to their use as animal shelters or working spaces, the ornate windows higher up were either covered by stained-glass or by delicate mashrabiya screens screens protecting the privacy of the women inside. The window frames and the friezes between the floors were marked in intricate white lime to contrast the mud-coloured background, creating a gingerbread house effect. Many had rooftop terraces, which doubled as entertainment spaces as well as outdoor bedrooms on warm nights. The magnificence of the buildings, together with their simple practicality, made for an inspiring architectural vision.ADVERTISEMENT

From the alleyway, it was practically impossible to appreciate the true height of these buildings, but when I reached the souq, I could see that some were up to seven storeys high. I climbed up to a seventh-floor rooftop that had been converted into a cafe; the Old Town lay below me, but the neighbouring buildings were mostly as tall as the one I was on, evoking the strange sensation of being surrounded by skyscrapers. I could almost have been in Dubai or New York, only that these constructions were somewhere between 300 and 500 years old and built from mud. Some of Yemen’s skyscrapers can reach up to around 30m in height, and the first modern skyscrapers in Chicago were only slightly taller than that. 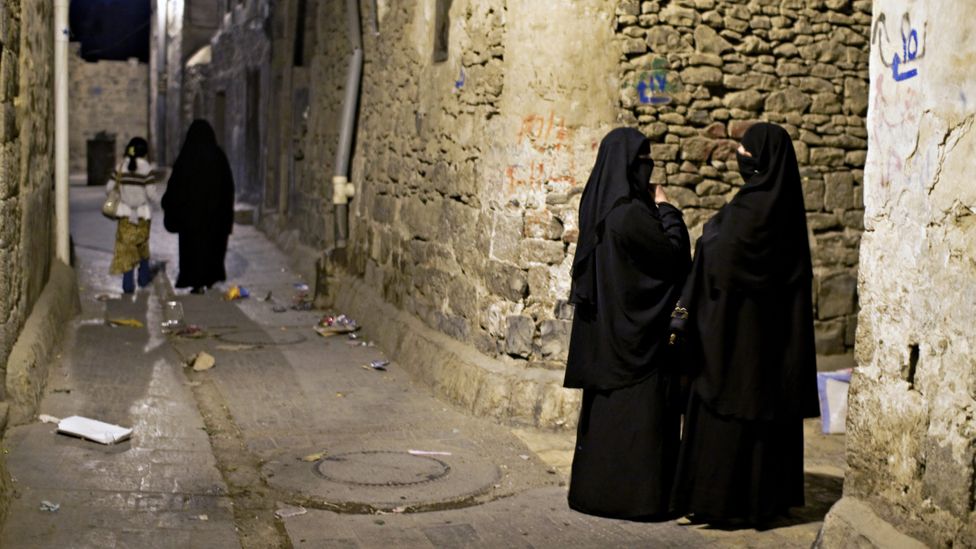 At street level, buildings are often windowless due to their use as animal shelters or working spaces (Credit: MaciejStangreciak/Getty Images)

Yemen is scattered with similar soaring constructions, from those in smaller villages to bigger towns, such as the famous Shibam, dubbed in the 1930s “The Manhattan of the Desert” by Anglo-Italian explorer Dame Freya Stark; or the exquisitely decorated Dar-al-Hajar, the Imam’s Palace of the Rock.

The Yemeni skyscraper style of architecture is so unique that the cities of Zabid, Shibam and the Old City of Sana’a have been recognised as Unesco World Heritage sites, with the tradition dating at least to the 8th and 9th Centuries, according to Trevor Marchand, professor of social anthropology at London’s School of Oriental and African Studies (SOAS) and author of Architectural Heritage of Yemen – Buildings That Fill My Eye. Exact dating is next to impossible, as these mud brick or adobe buildings need to be constantly patched up and restored to keep them from succumbing to the harsh elements, but “medieval sources tell us that the Ghumdam Palace in Sana’a, allegedly built in the 3rd Century BC and the seat of Yemen’s ancient Sabaean rulers, was 20 storeys high and elaborately decorated,” Marchand said.

You may also be interested in:
• The Maya’s ingenious secret to survival
• Stepping back in time in Socotra
• An immense mystery 11,000 years old

What makes the Yemeni skyscrapers so unique is that they are still in use, just as they were hundreds of years ago. In the Old Town of Sana’a, for example, while a few have been converted into hotels and cafes, the majority are still used as private residences. “As children, we would play soccer in the tight alleyways and as teens we would sip coffee under the bright stained glass,” said Arwa Mokdad, peace advocate for Yemen Relief and Reconstruction Foundation.

As I travelled around the country, marvelling at these skyscaper cities, I could not help but wonder why the Yemenis built these high-rises, considering the vast desert expanses of their country. Salma Samar Damluji, architect and author of The Architecture of Yemen and its Reconstruction told me that construction was, in fact, traditionally restricted to small sites, meaning buildings needed to be vertical. “Towns and cities had an outer wall, called Sur, and a further boundary from the desert,” she said, explaining that not only were the wall and the surrounding desert a barrier to any urban development, but any agriculturally viable space was deemed too valuable to build on, so that building upwards, in tightly formed clusters, was the preferred option. 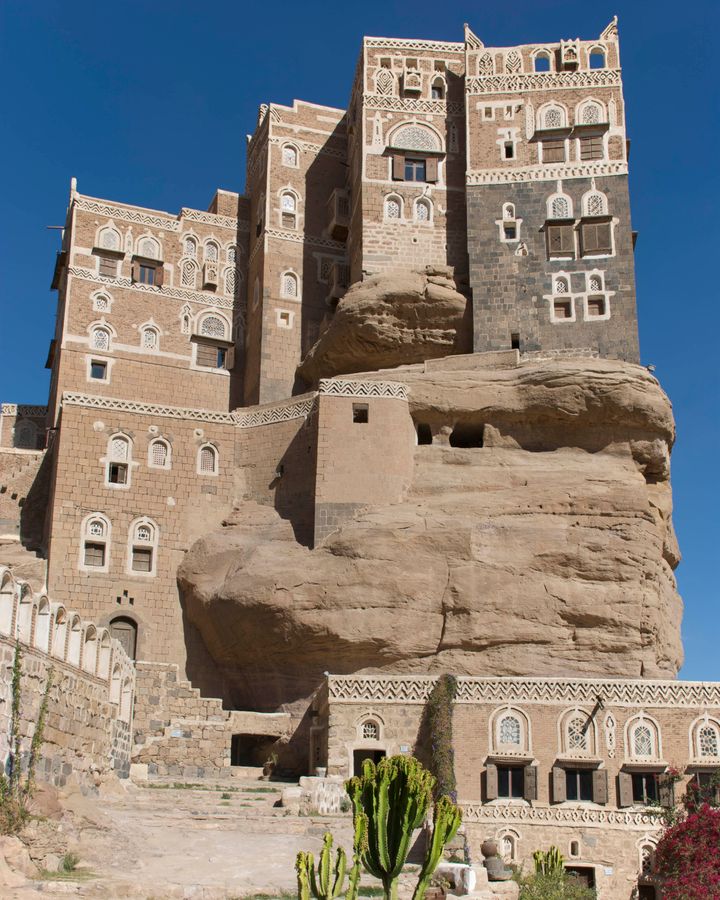 “An important contributing factor to Yemen’s history of tower-house was the need for security against invading forces, as well as during times of local tribal dispute or civil war,” Marchand explained.

Constructed using natural materials, Yemeni high-rises are superbly sustainable and perfectly suited to the hot and dry Arabian desert climate. Roof terraces double as open-air bedrooms, while screens on the windows invite even the slightest breeze to enter the house, while also allowing light but not too much heat.

“Unbaked earth is an exceptional thermal mass,” added Ronald Rael, professor of architecture at UC Berkeley who specialises in buildings made from mud, and is himself living in his great grandfather’s adobe house in southern Colorado. He explained that “it both absorbs and releases heat slowly. During the day, as the sun beats upon the wall, the heat from the sun slowly absorbs into the wall. As night falls, that heat is slowly released, [helping] earthen buildings remain a comfortable temperature.” This simple natural effect has made adobe building still popular today and explains the endurance of Yemen’s mud-architecture.

Incredibly, construction usually didn’t use scaffolding. Instead, master builders would start with a stone foundation, often some 2m deep, upon which mud bricks were laid in a running bond, meaning one brick is overlapped by two above. They then slowly built upwards, placing wooden joists for strength and adding floors made from wood and palm materials as they went higher up. Scaffolding was generally only used at a later date, once the house was finished and needed replastering or restoration.

However, according to Damluji, these building skills are on the brink of extinction. “We are looking at structures that can stand for up to 300 years and more. Six and seven storey buildings built out of sun-dried mud brick in a way that no contemporary architect can build today.” 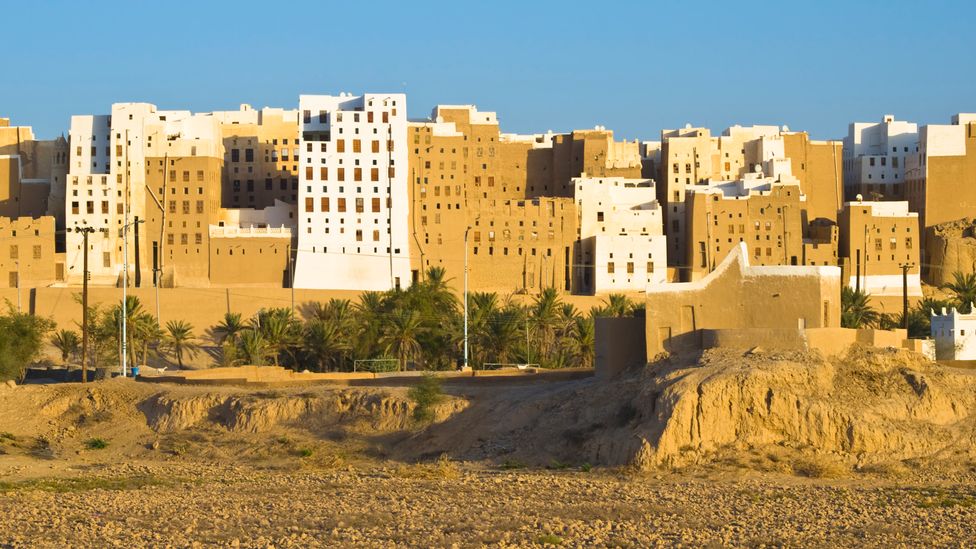 Known as “The Manhattan of the Desert”, the 16th-Century walled city of Shibam was given World Heritage status in 1982 (Credit: DavorLovincic/Getty Images)

To prevent this knowledge from being lost, Damluji works closely with the Dawan Architecture Foundation, which is striving to preserve these methods of building, encouraging the use of traditional materials and methods over modern convenience.

The historical buildings are also under threat from constant wind erosion, war and the economic struggles that prevent families from looking after their fragile homes properly. In 2020, Unesco surveyed some 8,000 of these architectural marvels and restored 78 that were on the brink of collapse. Unesco is doing its utmost to save as many buildings as possible, but it is difficult under the current circumstances.

“It is a harrowing experience to witness history turn into rubble,” said Mokdad. “This destruction is a loss for all of humanity.”

She added: “Anywhere else, these buildings would be museum pieces, but in Yemen they remain homes. I cannot begin to describe the pride of living in a home preserved by generations of ancestors – they are our connection to the past.”