The man who sold the war 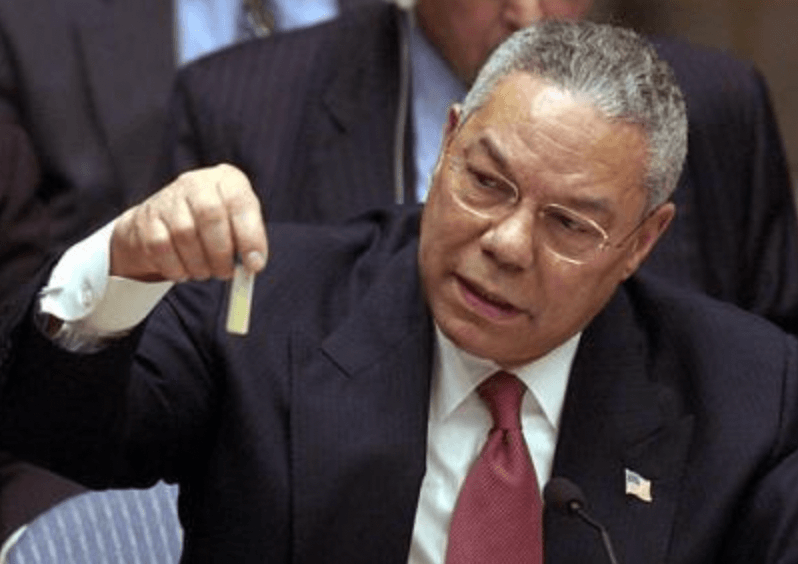 AT THE UN, COLIN POWELL HOLDS A MODEL VIAL OF ANTHRAX, WHILE ARGUING THAT IRAQ IS LIKELY TO POSSESS WMDS. (WIKIMEDIA)

Former Secretary of State Colin Powell is dead at the age of 84. His enduring legacy will always be his role in pushing the Iraq War. 42 days before the invasion, Powell held up a vial to symbolize anthrax in front of the U.N. and lied:

It’s hard to overstate the impact of Powell’s remarks. He was a retired four-star general and probably the most respected member of the Bush administration. Here’s Lawrence Wilkerson, who was Powell’s chief of staff at the time, in an op-ed from 2018:

Following Mr. Powell’s presentation on that cold day, I considered what we had done. At the moment, I thought all our work was for naught — and despite his efforts we did not gain substantial international buy-in. But polls later that day and week demonstrated he did convince many Americans. I knew that was why he was chosen to make the presentation in the first place: his standing with the American people was more solid than that of any other member of the Bush administration.

President George W. Bush would have ordered the war even without the United Nations presentation, or if Secretary Powell had failed miserably in giving it. But the secretary’s gravitas was a significant part of the two-year-long effort by the Bush administration to get Americans on the war wagon.

That effort led to a war of choice with Iraq — one that resulted in catastrophic losses for the region and the United States-led coalition, and that destabilized the entire Middle East.

Powell wasn’t part of Bush’s second term. Two years into the brutal war, he told Barbara Walters that the U.N. speech was “painful” for him and a permanent “blot” on his record. He went onto endorse Barack Obama’s presidential run and condemn Trump. Obviously no member of the Bush administration was ever held accountable for their war crimes, but this was enough for Powell to remain the most respected member of the bunch. The New York Times obituary of Powell doesn’t even mention the anthrax vial. Here’s how it categorizes his Bush years:

He returned to public service in 2001 as secretary of state to President George W. Bush, whose father Mr. Powell had served as chairman of the Joint Chiefs a decade earlier.

But in the Bush administration Mr. Powell was the odd man out, fighting internally with Vice President Dick Cheney and Defense Secretary Donald H. Rumsfeld for the ear of President Bush and for foreign policy dominance.

He left at the end of Mr. Bush’s first term under the cloud of the ever-worsening war in Iraq begun after Sept. 11 and growing questions about whether he could, and should, have done more to object to it. Those questions swirled in part around his U.N. speech, which was based on false intelligence, and which became the source of lifelong regret.

An NYT article about Powell’s connection to the Iraq War published shortly after his death refers to him as a “reluctant warrior.” This vision of Powell as a courageous man temporarily hoodwinked by Bush only makes sense if you know very little about his military career.

The NYT obituary also doesn’t mention the My Lai massacre. Back in 1968 Powell was a young Army major serving as an assistant chief of staff of operations for the Americal Division. He was tasked with investigating a letter written by Tom Glen, a solider in the 11th Light Infantry Brigade. Glen didn’t mention My Lai specifically, but he detailed how the barbaric treatment of Vietnamese civilians had shocked him.

“It would indeed be terrible to find it necessary to believe that an American soldier that harbors such racial intolerance and disregard for justice and human feeling is a prototype of all American national character; yet the frequency of such soldiers lends credulity to such beliefs,” wrote Glen. “What has been outlined here I have seen not only in my own unit, but also in others we have worked with, and I fear it is universal. If this is indeed the case, it is a problem which cannot be overlooked, but can through a more firm implementation of the codes of MACV (Military Assistance Command Vietnam) and the Geneva Conventions, perhaps be eradicated.”

If you want to read a brilliant (and maddening) book about the reality that Glen described, I can’t recommend Nick Turse’s Kill Anything That Moves highly enough. If you want some insight into how atrocities like My Lai were whitewashed, you could do worse than Colin Powell’s report on Glen’s letter.

“There may be isolated cases of mistreatment of civilians and POWs,” concluded Powell, “but this by no means reflects the general attitude throughout the Division..in direct refutation of this portrayal is the fact that relations between American soldiers and the Vietnamese people are excellent.”

Here’s Norman Solomon and the late Robert Parry writing about Powell’s report in 1996:

Powell’s findings, of course, were false. But it would take another American hero, an infantryman named Ron Ridenhour, to piece together the truth about the atrocity at My Lai. After returning to the United States, Ridenhour interviewed American comrades who had participated in the massacre.

On his own, Ridenhour compiled this shocking information into a report and forwarded it to the Army inspector general. The IG’s office conducted an aggressive official investigation and the Army finally faced the horrible truth. Courts martial were held against officers and enlisted men implicated in the murder of the My Lai civilians.

But Powell’s peripheral role in the My Lai cover-up did not slow his climb up the Army’s ladder. Powell pleaded ignorance about the actual My Lai massacre, which pre-dated his arrival at the American. Glen’s letter disappeared into the National Archives — to be unearthed only years later by British journalists Michael Bilton and Kevin Sims for their book Four Hours in My Lai. In his best-selling memoirs, Powell did not mention his brush-off of Tom Glen’s complaint.

On Israel/Palestine Powell was basically as awful as everyone else. He annoyed some in the pro-Israel crowd by talking about an eventual Palestinian state, but he certainly didn’t do anything to upset the apple cart. This stayed the same long after he left office. In a 2017 speech to the World Jewish Congress he praised the IDF: “I came to know and admire fellow soldiers in the Israel Defense Forces. I came to understand the commitment of blood we had with Israel. I was a student of the wars of 1948, 1956, 1967 and 1973. And an American professional soldier, I marvel at the professionalism and successes of the Israel Defense Forces.”

In that same talk he championed the Zionist cause: “The vision and prophecy of Theodor Herzl has become real so many years after his death. And America’s dedication, America’s alliance and America’s support of the democratic State of Israel has never wavered and never will.”

Powell was obviously a very intelligent person and maybe there’s reason to believe he was simply going through the motions with some of this stuff. An email leak from 2016 revealed his true feelings about Iran’s nuclear program. He knew that the fear mongering around the country mirrored the Iraq narrative he helped sell. He also acknowledged something U.S. lawmakers can’t reference in public: the existence of Israel’s nuclear weapons.

“Negotiators can’t get what he wants,” Powell told Leeds. “Anyway, Iranians can’t use (a nuclear weapon) if they finally make one. The boys in Tehran know Israel has 200, all targeted on Tehran, and we have thousands.”

“Can’t get enough sanctions to break (Iran),” he wrote later. “Lots of BS around about their progress. Bibi likes to say ‘a year away,’ as do our intel guys. … (It) ain’t that easy to do.”

Rereading Powell’s actual thoughts on this stuff, I was reminded of a story from Andrew Cockburn’s Donald Rumsfeld book where George W. Bush asks his dad what a neoconservative is:

Though he refused to read newspapers, he was aware of criticism that his administration had been excessively beholden to a particular clique, and wanted to know more about them. One day during that holiday, according to friends of the family, 43 asked his father, “What’s a neocon?” “Do you want names, or a description?” answered 41 “Description.” “Well,” said the former president of the United States, “I’ll give it to you in one word: Israel.”

There were a number of questionable Powell tributes this week, but the most telling might belong to Joy Reid. The MSNBC host is a consistent critic of most Republicans, but not Powell. Emphasis mine:

“General Colin Powell’s death is so shocking and heartbreaking,” she tweeted. “He had some tough moments around our wars, but was a fundamentally good and decent man and a great American we could all be proud of. I know my Caribbean-American fam certainly are. Wishing peace to his soul & family.”

I’ve seen a lot of strained euphemisms implemented in the service of our imperial project, but this one is certainly up there.

Aqeel Al-Rubai is a 42-year-old cosmetics shop owner in Baghdad. His cousin was killed in the war and he blames his dad’s fatal heart attack on the invasion. “What does that remorse do for us?,” he asked Al Jazeera after Powell died, referring to the late statesman’s public regrets. “A whole country was destroyed, and we continue to pay the price. But I say may God have mercy on him.”

People like Aqeel constitute the painful blot in Powell’s career. There’s millions of stories like his, but they don’t add up to much more than some tough moments for a reluctant warrior.