Canada: Police investigating after mosque in Cambridge severely vandalized in ‘act of hate’ 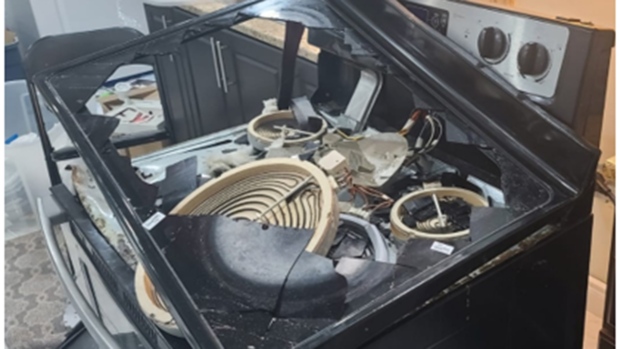 A damaged stove is seen after vandalism occurred at the Baitul Kareem mosque in Cambridge, Ont. on July 14, 2021. (Ahmadiyya Muslim Jama’at of Canada)

CAMBRIDGE, Ont. — A Muslim association says a mosque in southwestern Ontario has been severely vandalized in what it calls an act of hate.

The Ahmadiyya Muslim Jama’at Canada says tens of thousands of dollars of damage has been inflicted upon the Baitul Kareem Mosque.

Waterloo regional police say they responded to a report of a break-in at the mosque around 5:30 p.m. Wednesday.

Police say they believe one or more suspects forced their way into the mosque and caused significant damage and stole property.

The Ahmadiyya Muslim Jama`at Canada says dozens of boxes filled with books and flyers were destroyed.

It says it has heightened security at its mosques across the country.

“We are deeply troubled to learn of this attack on the Baitul Kareem Mosque,” said Lal Khan Malik, president of the Ahmadiyya Muslim Jama’at Canada.

“Our mosques have always served as symbols of peace in the community, and it is hurtful for us to see our mosque attacked and vandalized in this fashion.”