An author who visited mosques across Britain to investigate integration has revealed how parts of Blackburn are ‘no-go areas’ for white men, while ultra-orthodox parents in Bradford make children live under Taliban-like rules.

Author and political advisor Ed Husain, Professor at the Walsh School of Foreign Service in Georgetown University, has penned Among The Mosques: A Journey Across Muslim Britain in which he explores some of the UK’s largest mosques and the Muslim communities worshiping there.

The Muslim writer, who was himself radicalised in his youth and trained for Jihad by the same people as Omar Khyam, leader of the Bluewater bombers, grew up in a Bangladeshi family in Tower Hamlets, East London.

In the book, which is set to be released next week, Ed details how he researched his work by ‘turning up unannounced’ to the communal Friday prayers at the central mosque in cities across the country.

Husian, also chronicled conversations with taxi drivers, business owners, Imams and local white people about the mosques and the surrounding community, painting a worrying picture of divided communities – with white people in towns across the country admitting there are ‘no-go areas’ where they fear being physically attacked.

One man in Blackburn said ‘Asian’ teenagers repeatedly ‘jumped’ his 12-year-old son in broad daylight for ‘being white’.

Areas like Bolton, Dewsbury and Black are described ‘a different universe’, while he observes that in parts of the cities he has visited: ‘A Muslim can spend months with no contact whatsoever with mainstream ‘white’ Britain’.

Elsewhere, parents in Bradford Muslim parents have banned children from taking part in drama, theatre and dance classes as well as drawing, in echoes of rules implemented by the Taliban in Afghanistan and ISIS in Syria.

They are ‘physically in Britain but mentally living elsewhere,’ said Husain. 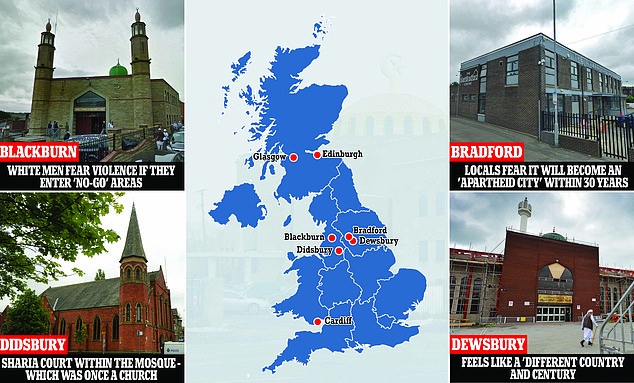 Ed Husain, who visited mosques across Britain for his new book, has revealed how parts of Blackburn are ‘no-go areas’ for white men, while ultra-orthodox parents in Bradford make children live under Taliban-like rules

Among the areas Ed visited was Blackburn, which has the highest Muslim population outside of London, the global hub for the Deobandis and the Tablighi Jamaat.

Almost half the mosques in the UK are controlled by the Deobandis, the ultra-orthodox version of the faith, which created the Taliban in Afghanistan, while the Tablighi Jamaat espouses a return to ‘true’ Islam as observed by the Prophet Mohammed.

In the city, where Ed was told mosques grow ‘organically’, he was shocked to discover the levels of resentment between white locals and Muslim citizens.

A group of white men told him they are scared to go into ‘no-go areas’ in the town, such as Whalley Range, with one man saying a gang of ‘Asian’ teenagers repeatedly ‘jumped’ his 12-year-old son. 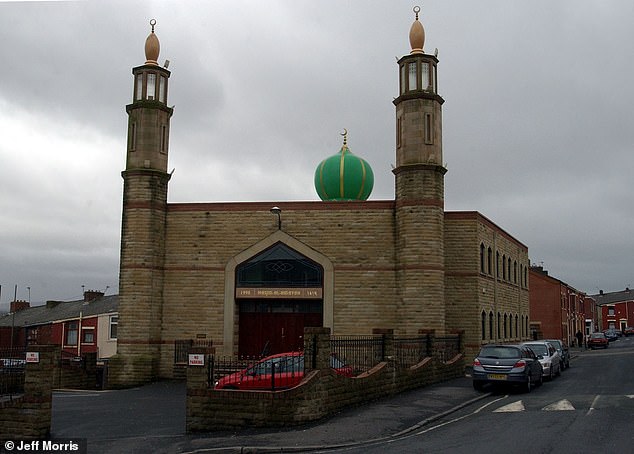 Among the areas Ed visited was Blackburn, the global hub for the Deobandis and the Tableeghi Jamaat (pictured, the Masjid Al Hidayah Mosque in Blackburn)

Two white men who were locals of Blackburn told Ed Whalley Range was a ‘no-go area’.

Upon visiting the area, Ed finds  the supporters of the killer of Salman Taseer, and supporters of Pakistan’s blasphemy laws, advertising their propaganda.

He also saw are posters for al-Aqsa Mosque and a gathering about liberating Jerusalem from Israel.

The high street was packed with shops for arranging Hajj pilgrimages, restaurants which provide gender separation, Islamic bookshops and a number of mosques.

One man tells him: ‘My son’s been jumped fi ve times, they were all Asian. Five times.’

‘You mean Asian kids?’ I try to clarify. ‘No, Asian men!’ he says, with emphasis. ‘Eighteen- and nineteen-year-olds. My lad’s only twelve. They battered him in broad daylight here.’

‘For what?’ I ask, astonished. They don’t look happy at my questions, and they both go quiet.

‘For being white,’ he says, slowly and deliberately. ‘Wrong area!’

I still can’t believe them.

‘Look, this is what the media guys say, but is it really true?’

‘If we go to Whalley Range, like, him and me at night-time, we’re guaranteed to get jumped. We won’t walk out of it. We won’t walk to the other end of the street.’

They told Ed the boy was ‘battered him in broad daylight…for being white’.

Another man in the group said the area of Whalley Range, which according to the 2011 census was 30 per cent British Asian and 38 per cent White, was a particular area they would avoid.

They told him:  ‘If we go to Whalley Range at night-time, we’re guaranteed to get jumped. We won’t walk out of it. We won’t walk to the other end of the street.’

They also claimed the council for Blackburn with Darwen would ‘threaten you with eviction’ for flying the English flag’ and called it ‘racist.’

Meanwhile former councillor Saima Afzal told Ed that at one Muslim school in Blackburn the headteacher had withdrawn young girls from swimming lessons, saying it was inappropriate for them to wear swimming costumes.

As well as visiting the Central Mosque, Ed visited what he described as an ‘otherwise ordinary-looking shop’ in which he found several books detailing strict restrictions for women.

He discovered copies of Bahishti Zewar, which insists that it is a sin to ‘enjoy dancing and listening to music’ and to ‘like and be attracted to the customs of the kuffar [unbelievers]’.

He also uncovered Mukhtasar al-Quduri: A Manual of Islamic Law, which cites: ‘When a girl reaches puberty, it is not appropriate that any of her should be seen, excepting her face, and her hands up to the wrists.’

BRADFORD: LOCALS FEAR IT WILL BECOME AN ‘APARTHEID CITY’ WITHIN 30 YEARS

In nearby Bradford, Ed was amazed by the lack of white English people in the city, and asked a Muslim taxi driver ‘where they are’.

He was told they had all ‘gone with the wind.’

According to the author, there were mosques ‘on almost every corner’, with Ed writing: ‘Then there are houses that also serve as mosques and madrasas , banners affixed to their façades.’

Ed learned that Muslim parents living in the area had forbidden their children from taking part in drama, theatre and dance classes as well as drawing.