By KATE DENNETT FOR MAILONLINE

Afghan security forces fought back a huge Taliban offensive just two days after United States forces handed control of a local base back to the country’s army.

The Taliban launched a massive offensive in Afghanistan’s Helmand province in the last 24 hours, officials and residents claimed on Tuesday.

Afghan security forces fought back against the offensive just days after a handover ceremony which saw US forces hand over control of Antonik camp in Helmand to the Afghan National Army (ANA).

The offensive comes after militants launched assaults around the country following a missed US deadline to withdraw troops, as agreed in talks with the Taliban last year. 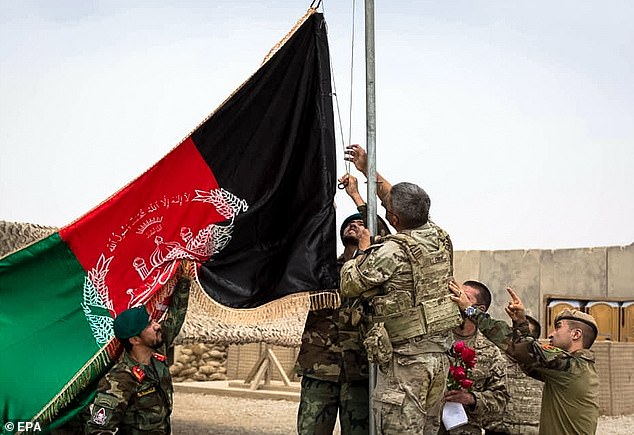 The Taliban launched a massive offensive in Afghanistan’s Helmand province on Monday (pictured: US soldiers handing over a Helmand base to Afghan army on May 2)

Attaullah Afghan, the head of Helmand’s provincial council, said the Taliban launched their offensive on Monday from multiple directions, attacking checkpoints around the outskirts of Lashkar Gah, taking over some of them.

Speaking about the offensive, one resident claimed that families who would afford to leave had fled, but he was forced to wait with his family in fear before the Taliban were pushed back.

Mulah Jan, a resident of a suburb of provincial capital Lashkar Gah, said: ‘There was a thunderstorm of heavy weapons and blasts in the city and the sound of small arms was like someone was making popcorn.

‘I took all my family members to the corner of the room, hearing the heavy blasts and bursts of gunfire as if it was happening behind our walls.’

Afghan security forces launched air strikes and deployed elite commando forces to the area. The insurgents had been pushed back but fighting was continuing on Tuesday and hundreds of families had been displaced, Attaullah Afghan added.

The Afghan defence ministry said just more than 100 Taliban fighters had been killed in Helmand but it did not provide details on casualties among Afghan security forces. The Taliban did not immediately respond to request for comment. 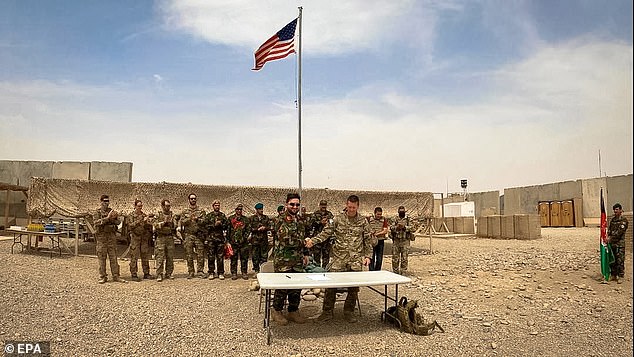 A Taliban surge in Helmand would have particular resonance, as the desert province was where US and British forces suffered the bulk of their losses during the 20-year war.

The defence ministry said security forces have also been responding to attacks by the Taliban in at least six other provinces in the past 24 hours, including southeastern Ghazni and southern Kandahar.

Although the United States did not meet the May 1 withdrawal deadline agreed in talks with the Taliban last year, the pull-out is underway.

President Joe Biden announced earlier this month his plan to withdraw the United States’ remaining 2,500 troops on September 11, the 20th anniversary of the 9/11 attacks.

As part of the pullout, US forces handed over over a base in Helmand to Afghan troops just two days ago, where a handover ceremony took place at Antonik camp. 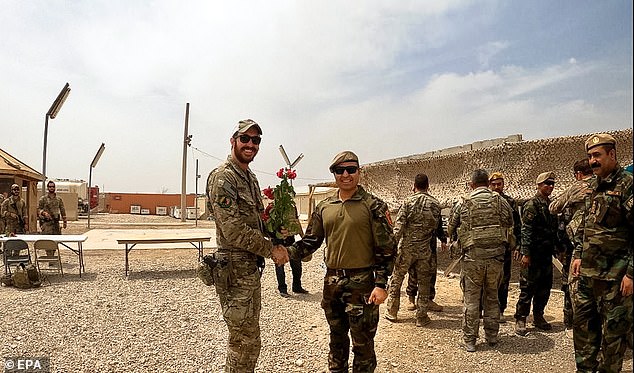 The defence ministry said security forces have also been responding to attacks by the Taliban in at least six other provinces (pictured: Helmand base handover ceremony on May 2)

The May 1 deadline for US troops to pull out was agreed last year under former President Donald Trump.

The Taliban rejected Biden’s announcement that troops would stay on past it but withdraw over the next four-and-a-half months, while the deadline has been met with a surge in violence.

A car bomb in Logar province killed almost 30 people on Friday evening, while at least seven Afghan military personnel were killed when the Taliban set off explosives smuggled through a tunnel they had dug into an army outpost in southwestern Farah province on Monday.

Islamists, emboldened by Joe Biden’s decision to pull troops out of the country, have warned the US and its Nato allies there will be ‘problems’ should they fail to beat a swift retreat in September.