Barack Obama’s beloved step-grandmother, a Muslim and philanthropist, dies in Kenya at 99

The family matriarch and celebrated philanthropist was open to all faiths, religious leaders here have said. 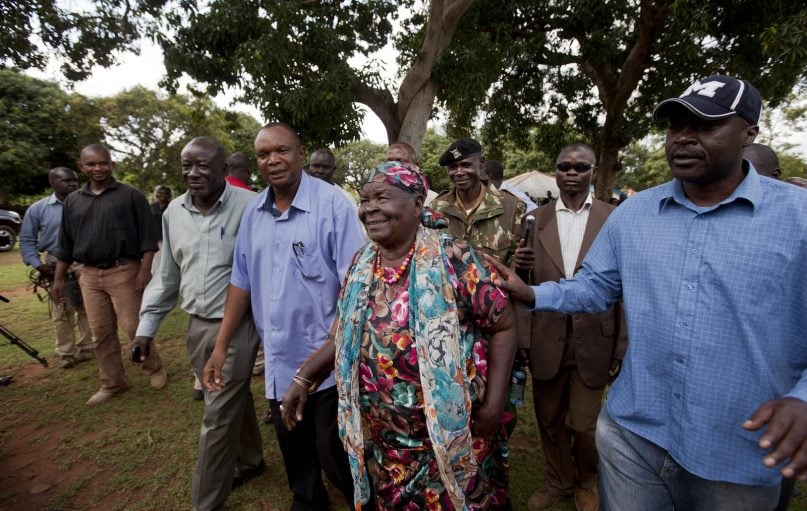 FILE – In this Tuesday, Nov. 6, 2012, file photo, Sarah Obama, center, step-grandmother of then U.S. President Barack Obama, walks back to her house after speaking to the media in the garden of her home in the village of Kogelo, western Kenya. Sarah Obama, the matriarch of Barack Obama’s Kenyan family, has died, relatives and officials confirmed Monday, March 29, 2021 but did not disclose the cause of death. She was at least 99 years old. (AP Photo/Ben Curtis, File)March 29, 2021By Fredrick NzwiliShareTweetShare

NAIROBI, Kenya (RNS) — Sarah Onyango Obama, the step-grandmother of former U.S. President Barack Obama, died Monday (March 29) at the age of 99, only 23 days away from her 100th birthday. The family matriarch and celebrated philanthropist was a Muslim but open to all faiths, religious leaders here have said.

“I had visited her several times in Kogelo. She was always open to us and encouraged the faiths to work for peace and unity. Although she was a Muslim, she was very welcoming,” said the Rev. Joachim Omollo, a Roman Catholic priest in the archdiocese of Kisumu where she lived all her life. Despite not having formal schooling herself or being able to read, the cleric said Mrs. Obama had a vision to educate and feed the less fortunate children in society.

Fondly known as Mama Sarah, she suffered a stroke in September and died while undergoing treatment at the Jaramogi Oginga Odinga Teaching and Referral Hospital in the lakeside city of Kisumu. She was the last living grandparent of former President Obama.

“My family and I are mourning the loss of our beloved grandmother,” the former president tweeted along with a younger picture of himself with Mrs. Obama. “We will miss her dearly, but we’ll celebrate with gratitude her long and remarkable life.

“She did not die of COVID-19 related issues. We want to clarify that she has been ailing for some time,” Haji told journalists. This had followed speculations after some people were seen disinfecting a ward and a room where the body had been kept in the hospital.

Kenya’s president, Uhuru Kenyatta, mourned Mrs. Obama as an icon of family values and a philanthropist.

“We have lost a strong virtuous woman. A matriarch who held together the Obama family,” said Kenyatta. “She was a loving and celebrated philanthropist who graciously shared the little she had with the less fortunate.”

From her home in Nyang’oma Kogelo in Siaya County, Mrs. Obama carried out charity work, helping feed and educate hundreds of orphans. She also took care of widows through the California-headquartered Mama Sarah Obama Foundation. Through a non-governmental organization known as the Safeguard Orphans and Widows Organization (SAWO), she supported groups mainly of women and children orphaned by HIV and AIDS.

Her Sarah Obama Community Library recently went digital and partnered with Worldreader to deliver 7,000 e-books to the rural area.

Mrs. Obama became famous in 2006 after President Obama, then a U.S. senator for the state of Illinois and celebrity in Kenya, visited her in her rural home. During his second visit to Kenya as a sitting U.S. president, Obama met her in Nairobi. He later visited again during the summer of 2018. Obama’s election sent hundreds of tourists to her home village.

During 2008 election campaigns, Mrs. Obama defended President Obama against allegations that he was a Muslim and was born in Kenya, according to the BBC.

Mrs. Obama was born in 1922 in a village near Lake Victoria.