While it is not yet official inauguration of the mosque, today, the Ahmadiyya Muslim community in Belize officially opened its new house of prayer and headquarters at mile one and a half on the George Price Highway. Starting today, the facility will be available for use by not only members of the Muslim community, but also other religious groups that would need a space for worship. The official opening coincides with the day the Ahmadiyya Muslim Jama’at community was founded back in 1889, one hundred and thirty-two years ago. 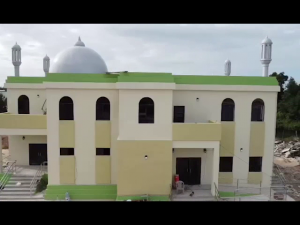 “This mosque is a house of God so it is not only for Muslims alike, but it is for our Christian, Hindu and Jewish brothers as well. So it is a place of worship and a place for unity and love.”

“The name was given by our current leader of the community. Masjid Noor, meaning the Mosque of Light, where whoever comes they will find light in closeness to God Almighty or where to communicate with God Almighty. We started the foundation stone around fifteen months ago and by the Grace of God, this has been built in a unique way because the people that built it were the Canadians volunteers that had built another mosque in Canada in a similar way.”

“This is the worship area that will be able to house two hundred people. There is an office area here. A library is upstairs; there is a missionary residence and a guesthouse and a kitchen.”

Viewers please note: This Internet newscast is a verbatim transcript of our evening television newscast. Where speakers use Kriol, we attempt to faithfully reproduce the quotes using a standard spelling system.