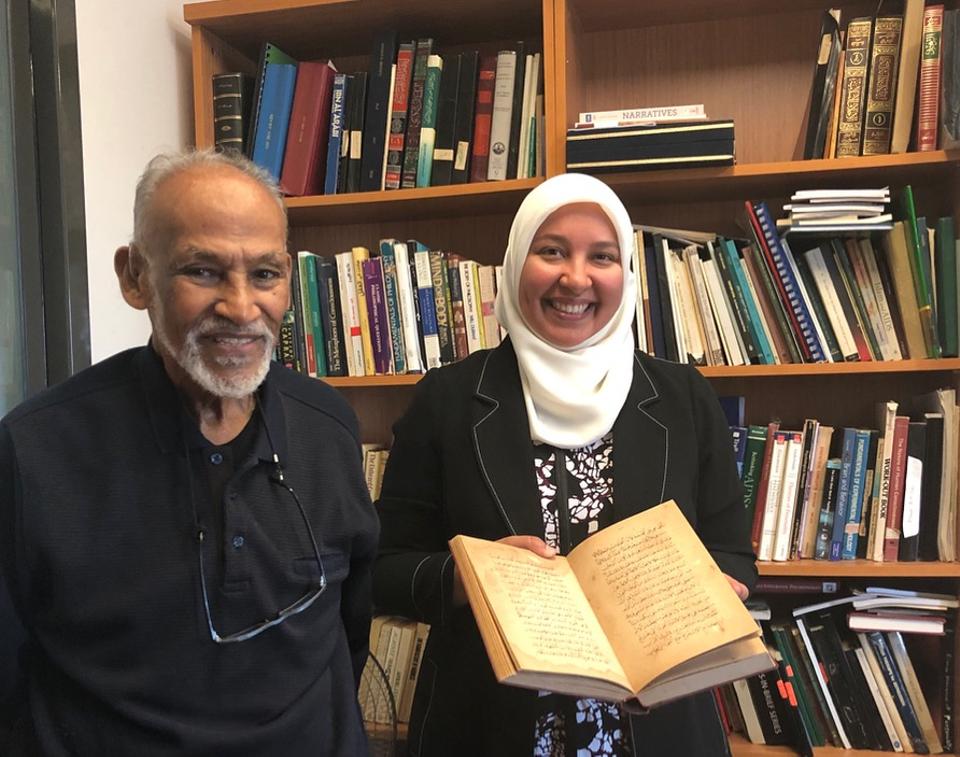 Dr Badri was a pioneer of modern Islamic approaches to psychology who influenced countless students in the field, through whom his legacy lives on.
“Don’t worry, Malik, Freud signs their paychecks!” These were words that once comforted the recently deceased father of modern Islamic Psychology, Dr Malik Badri, upon complaining to a friend that he was ridiculed by fellow psychologists, including Muslims, when he attempted to present an Islamic framework of psychology to them in the 1960s.

Having trained as a psychologist in the UK, after completing primary studies in his home country of Sudan and his bachelor’s and master’s degrees from the American University of Beirut, Dr Badri was elected as a Fellow of the British Psychological Society.

While he felt there was much from his training that could benefit the Muslim community, he also witnessed fellow Muslim psychologists adopt wholesale the staunchly secular frame of Western psychology in which there was no room for religion or spirituality.

Dr Badri was very concerned about the serious cultural and ideological dilemmas that would result from what he referred to as “ethnocentric, indiscriminate exportation of secular Western psychology” to Muslim and third-world countries under the guise of the “scientific superiority” of the West. He was particularly concerned that students of psychology in Muslim countries were “swallowing the kernel of psychology with its nutshell; [keeping] the baby with its filthy water.”

This then led to the publication of Dr Badri’s famous paper, “Muslim Psychologists in the Lizard’s Hole,” followed by his best-selling book, The Dilemma of Muslim Psychologists, published in London in 1979. This magnum opus, along with Dr Badri’s numerous other books, have inspired many to refuse the uncritical acceptance of Western psychological theories and practices and instead revise them according to an Islamic worldview.

The original contributions of Muslim scholars and physicians, however, have been largely ignored, at times deliberately, by modern Western historians of psychology. Today, psychology textbooks often start by honouring the works of the Greeks and Romans and then skip centuries to the European Renaissance as though the world plunged into literary ignorance for more than a thousand years in between.

The word Renaissance means rebirth, which implies Europe was trying to revive the dead sciences of the classical Greeks. But science never actually died. The Muslims inherited the science of the Greeks, refined it and innovated beyond it, before passing it on to Europe.

It was at this juncture that Dr Badri was alerted by his colleague Professor Mehdi Mohaghegh about a ninth-century manuscript by Abu Zayd al-Balkhi discovered in the Ayasofya Library in Istanbul by Professor Fuat Sezgin entitled, Masalih al-Abdan wa al-Anfus (Sustenance for Bodies and Souls).

Dr Badri then took on the task of writing a psycho-historical treatise on al-Balkhi’s manuscript in Arabic, then translated the psychotherapeutic section of the manuscript into English, now entitled Sustenance of the Soul.

Dr Badri aptly showed how al-Balkhi may have been the first scholar to clearly differentiate between psychoses and neuroses, i.e., between mental and psychological disorders. Furthermore, al-Balkhi’s classifications of emotional disorders were strikingly modern; he classified mental illnesses into four overarching categories: fear and panic, anger and aggression, sadness and depression, and obsessions.

To top it off, al-Balkhi was likely the first in history to have developed a refined cognitive behaviour therapy (CBT) and illustrated its use for each of the disorders he classified.

It was at this point that my path serendipitously crossed with Dr Badri. Having myself been trained in the classical Islamic sciences before training as a psychiatrist, I was determined to uncover the works of early Muslim scholars and their understanding of the multi-disciplinary science called “ilm ul-nafs,” or the study of the self.

Drowning in hundreds of original manuscripts that ranged from the seventh to sixteenth centuries, I happened upon Abu Zayd al-Balkhi’s original ninth century manuscript and later Dr Badri’s Arabic annotation of it. As a trained psychiatrist I could immediately see the connection between al-Balkhi’s diagnostic classification and the DSM-5. In some cases, al-Balkhi’s descriptions (ninth century) matched the DSM-5 (2013) point by point.

I took a chance and wrote an e-mail to Dr Badri introducing myself, I shared my findings and plan to publish them in double-blinded, peer-reviewed mainstream medical journals. To my absolute astonishment, Dr Badri took the time to write back to me.

I would later learn from his wife in an online tribute that he would take the time to respond to each and every message sent to him. In his email response he congratulated me and encouraged me to pursue this line of research. He also shared the good news that he was in the process of translating into English what would become his most famous work: al-Balkhi’s manuscript.

With Dr Badri’s blessings, I submitted my work to medical journals. Upon review of my manuscripts, the medical journals wrote back saying my claims were “unorthodox” and they would need to have my paper reviewed by historians of medicine.

After many long months of waiting – and during which I was positive the papers would be rejected – the historians finally wrote back confirming my claims: al-Balkhi was, in fact, likely to have been the first to correctly classify, diagnose and propose functional treatments for psychiatric illnesses such as OCD and phobias an entire millennium before the European psychiatrists credited with these discoveries!

They even went as far as saying that my articles re-write the history of psychology and overturn the narratives that either underplay or deliberately leave out Muslim contributions to the field now known as psychology.

Dr Badri was very proud of this milestone. This breakthrough subsequently led me to dedicate an entire line of research to the history of Islam and psychology in my lab, the Stanford Muslim Mental Health Lab at Stanford University. Today, we continue to unearth the treasures of Muslim predecessors in the field of psychology – a field they took very seriously and contributed to extensively.

Since we were in Istanbul, he said he had a surprise for me, and pulled from his bookshelf the original manuscript that he once used to translate and annotate al-Balkhi’s Sustenance of the Soul all those years ago on loan to him from the Ayasofya Library! It was like witnessing history unfold right in front of me. It was a surreal moment that so perfectly captured how Dr Badri’s devotion to bringing the holistic Islamic frame of wellbeing back to psychology that so deeply inspired and transformed me – and the countless students he taught in universities across Africa, Asia, Europe and the Middle East and via the Islamic psychology centres and associations he founded during his lifetime.

During that final in-person visit with Dr Badri, I too had the chance to share a surprise with him – the exciting news that Stanford University would be the first university in the US to add a full, permanent course on Islamic Psychology to its offerings.

I was happy for the opportunity to celebrate this next milestone with him. He spent hours with me outlining what should be taught in my course, and for that I, and many future students of Islamic psychology, will be forever indebted.

Jokingly, but with a sharp edge of truth, he said to me, “had someone told me back in the 1960s that an American university would have an Islamic psychology course in its catalogue one day, I would have diagnosed them as crazy!” He always had such a great sense of humour that will be sorely missed.

I am so thankful that Dr Malik Badri had the opportunity to witness the revival of Islamic psychology during his lifetime and see his tireless work start to bear fruit. Today there are several global Islamic psychology conferences attended by thousands interested in the field. There are courses, workshops, books, theoretical and clinical applications that are all dedicated to reclaiming and furthering the field of Islamic psychology. It would not be a stretch to say that all of this can be traced back to Dr Badri.

Dr Malik Badri will always be my role model of an unapologetic Muslim in academia and an ardent follower of the Prophetic Sunnah. He will always be my hero for charting a path for clinicians and researchers like myself on how to discern the “baby” from the “bathwater” in order to extract only the beneficial aspects of Western psychology to help fellow Muslims.

He will always be credited as the reviver of the modern Islamic psychology movement and as being instrumental in the effort of bringing the soul back to psychology. My prayer is that Dr Malik Badri’s students carry forward his legacy and works so that they may be counted for him as a sadaqah jariyah, ongoing charity.

Disclaimer: The viewpoints expressed by the authors do not necessarily reflect the opinions, viewpoints and editorial policies of TRT World.

We welcome all pitches and submissions to TRT World Opinion – please send them via email, to opinion.editorial@trtworld.com

Rania Awaad M.D., is a Clinical Associate Professor of Psychiatry at the Stanford University School of Medicine where she is the Director of the Stanford Muslim Mental Health Lab, Associate Chief of the Division of Public Mental Health and Population Sciences, and Co-Chief of the Diversity and Cultural Mental Health Section. Prior to studying medicine, she pursued classical Islamic studies in Damascus, Syria and holds certifications (ijāzah) in Qur’an, Islamic Law and other branches.