Can Novartis really make its medicines available to everyone?

Novartis launched a new strategy in sub-Saharan Africa in 2019. Sales people will no longer be incentivised by sales targets but rather by patients reached. Reuters / Baz Ratner 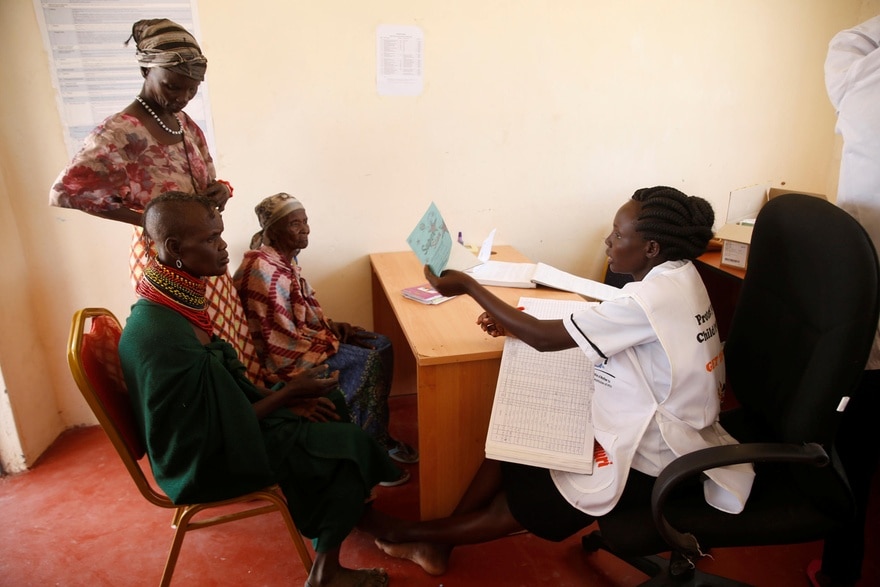 Swiss pharma firm Novartis has said it wants everyone in the world to be able to access its products, even multi-million-dollar gene therapies. Can its experiment work?

Five years ago, Novartis did something no one else in the industry had ever done. It set out to rigorously evaluate whether selling a basket of generic and patented medicines for $1 (CHF0.90) per treatment per month would help poor households in Kenya use and afford them.

After the first year of the programme, evaluators from Boston University found that it had had little impact. The price tag for some medicines was still higher than available alternatives and the initiative did little to address the core availability and affordability problems for the poorest households.

Veronika Wirtz, a trained pharmacist who was part of the Boston University team leading the evaluation in Kenya, thinks this is exactly the type of study pharma companies should be doing. “Companies think that because they have an access programme that it is necessarily good. But this is not always true,” she said.

The findings were humbling for the company that has been consistently ranked near the top of the Access to Medicine Foundation IndexExternal link, a measurement of how well the top 20 pharma companies are doing at making health products available and affordable across socioeconomic divides.

While experts agreed that the results might have been better if the evaluation had been done later, the findings also reflect how difficult it is to make medicines – some of whose prices already make them out of reach for patients in wealthy countries – accessible everywhere under the current pharmaceutical industry model.

Most of the discussion around access to medicines to date has been about infectious diseases, especially those common in poorer countries like tuberculosis, malaria and HIV.

In recent years, the conversation has moved into other regions and diseases as evidence has grown about the threat of non-communicable diseases (NCDs). While the world is gripped by the Covid-19 pandemic, some 70% of all global deaths are caused by cancer and diabetes, among other NCDs. Poor and rich countries are both hit hard by such diseases. Rare, genetic diseases like cystic fibrosis and spinal muscular atrophy also take a heavy toll on health systems and families.

Novartis is also involved in medicines to treat leprosy, malaria, Chagas Disease and sickle cell disease. It set a target to reach 50% more patients with programmes on these diseases by 2025. Afp / Tony Karumba

Treating these diseases presents huge opportunities for companies like Novartis and Roche, but it also creates new challenges around access to medicines.

When developing treatments, pharmaceutical companies often focus on wealthy markets like the United States to recoup their investment quickly. After that, they have little incentive to distribute the drugs around the world.

The CEO of drug maker Bayer admitted as much when his company came under pressureExternal link to make a patented cancer drug available in India a few years ago. “We did not develop this product for the Indian market, let’s be honest. I mean, you know, we developed this product for Western patients who can afford this product,” said Marijn Dekkers. His admission landed him in hot water with critics, who pointed to a broken system.

An analysis by the healthcare data analytics firm IQVIA in 2017 supported critics’ assertions that drugs are not being distributed evenly. It found that new medicines reach less than 1-5% of patients in low- and middle- income countries five years after the first launch.

This could slowly be changing. “More companies are saying it doesn’t make sense to invest all of this money in developing innovative therapies that only reach at best 10% of the world,” said Jayasree Iyer, the executive director of the Access to Medicine Foundation.

Companies now realise there are real revenues to be made in low-income markets. “The only way to do this is to only commit to innovative products if they are going to have global reach,” Iyer added.

This is exactly what Novartis says it wants to do. Its CEO Vas Narasimhan announced a couple years ago that every new medicine made by the company must consider access from the start. Last September it set a goal of increasing by 200% the number of patients reached in low- and middle-income countries with “innovative medicines” by 2025.

Novartis recently backed its pledge on the stock market, launching the first healthcare industry bond tied to access targets. Bondholders will get a larger payout if the company fails to meet the targets.

Jenna Denyes, a healthcare analyst with GAM Asset Management, says the strategy makes sense from a business perspective. “The more drugs they sell, the more patients they have, the better it is for their company.” She adds that GAM’s healthcare innovation fund, which has positions in Novartis, wants to see that companies are not just developing solutions to address unmet medical needs but also thinking about how to make them accessible.

Novartis is now faced with the question of how to deliver on its promise and bring cancer drugs or immunotherapies being sold at high prices in Switzerland to poor households in sub-Saharan Africa or India, for example. Could a $2.1 million-therapy reasonably be distributed to all who need it?

Both public health advocates and Novartis agree that the answer can’t be about giving away medicines. This isn’t sustainable according to Wirtz. “Donations are a short-term solution in emergency situations, but they don’t last.”

Lutz Hegemann, who is the Group Head of Corporate Affairs and Global Health at Novartis, believes “there is no one-size-fits-all approach” and that the solution must be about “a combination of approaches: philanthropy, zero profit and, most critically, shared-value business models, which are sustainable”.

Suisse has entered a multimillion-dollar agreement to settle litigation over property debt with US company MBIA Insurance.

One way of providing more access to certain drugs involves developing a budget alternative, which one Swiss newspaperExternal link equated to the MBudget line from Swiss retailer Migros. These “emerging market brands”, as Novartis calls them, are not generics or biosimilars but the same drugs with different brand names and pricing for different income levels. A company spokesperson told SWI swissinfo.ch that some 118 emerging-market brands have been approved for its innovative medicines across more than 50 developing markets.

One of these is omalizumab (Xolair®), a treatment for asthma In parallel to the launch of the original brand, Novartis released an emerging-market brand of the drug for 10% of the original price in India.

As another example, the EMB for the breast cancer therapy Piqray was launched in India before European approval.

The company is taking a similar approach to its distribution of the migraine medicine Aimovig in Mexico. Aimovig is a self-injectable treatment with a US list price of $575 (CHF519) per month. The company used a socioeconomic evaluation of patients to determine how many vials of Aimovig an individual can afford during a year. Novartis then pays the balance to cover full treatment. Patients also use an app to record migraine diaries and help physicians monitor outcomes. Novartis estimates an additional 24 million people could gain access using this approach.

Some of these approaches won’t work though for the gene and immunotherapies that have multi-million dollar price tags.

When Novartis launched its gene therapy Zolgensma for spinal muscular atrophy, payers balked at the $2.1 million (CHF1.9 million) price tag. The one-time infusion can cure the rare deadly disease but some insurance companies and healthcare systems – even in wealthy countries – are refusing to cover the cost.

How can a drug cost $2.1 million?
This content was published on May 29, 2019May 29, 2019 US authorities have approved a $2.1 million gene therapy, making it the most expensive drug ever. Can such a price tag be justified?

The company has offered the option to pay over time and is offering the treatment for free to eligible patients under two years old who are citizens of countries where the treatment isn’t yet available. Novartis acknowledged that this approach won’t be possible everywhere and said it is “looking for a sustainable solution” that involves entire healthcare systems.

No success in secrecy

Iyer from the Access to Medicine Foundation said that other pharma companies are watching Novartis’ experiment closely. Despite having no vaccine business and limited involvement in Covid-19 therapies, the company recently ranked second in the Access to Medicine Index thanks to the way it is applying access across its portfolio and trying to reach people in the poorest countries. As part of its pandemic response, Novartis also offered a not-for-profit portfolio and stepped in to support production of Covid-19 vaccines developed by other companies.

Public health campaigners argue that much of this is public relations and tweaks around the edges that don’t address the underlying problems of poor access. Yannis Natsis from the European Public Health Alliance told swissinfo.ch that the problems of excessive pricing won’t go away until there is transparency around how much it costs to produce these drugs and the prices agreed with governments.

“Pharma is part of the solution, but secrecy only undermines government leverage,” said Natsis pointing to how secret vaccine deals during the Covid-19 crisis have kept power in the hands of big companies. This has made it difficult for governments to make vaccines accessible to the most at risk.

Cancer treatment
Push for drug pricing transparency strikes a nerve with industry
This content was published on May 19, 2019May 19, 2019 The 72nd World Health Assembly opens on Monday, but a draft resolution to end secrecy around drug pricing has already struck a nerve.

Vicki Pinkney Atkinson, a trained nurse who works for the NCD Alliance in South Africa, echoed these sentiments. She suffers from Type 2 diabetes and other chronic diseases for which treatments exist but are not available through the public sector, where most people buy their medicine. She spends a third of her pension every month just on medicines. “We as the people who need the drugs, who can’t pay for them, we are dependent on clear transparent deals with companies. And, that is not happening,” she told swissinfo.ch.

At the World Health Organisation Executive Board meeting a few weeks ago, many governments including Austria, Bangladesh and the Philippines lamented the high prices of new health technologies, pleading for more transparency on prices and R&D costs.

Novartis told swissinfo.ch that they are not able to disclose specific pricing information for their products for competitive reasons. The pharma industry has pushed back on calls for more transparency, saying that prices should be determined by their value not the cost to produce them.

What worries Wirtz in all of these efforts at access is that they aren’t being evaluated rigorously to know if they are doing any good, or even doing harm. Novartis is no longer working with Wirtz’s team on assessing the Kenya programme. It told swissinfo.ch that it has taken several steps to “enhance” the programme in Kenya including moving away from the basket approach, which was attractive commercially, but created hurdles for local procurement of medicines. For now, the main indicator it is using to assess progress, is the number of patients reached.

“The goal of evaluations is not to show splendid results. From splendid results sometimes we can learn very little,” said Wirtz. “We can learn from results, good or bad. We need to take them into our evidence based and build better programmes in the future.”