Abdul Rohim, the son of Jemaah Islamiah co-founder Abu Bakar Bashir, says father was a ‘victim’ for believing in teaching of Islamist extremists
But a former counterterrorism police general warned that the country’s myriad radical groups would seek Bashir out and wait for a directive from him to wage jihad 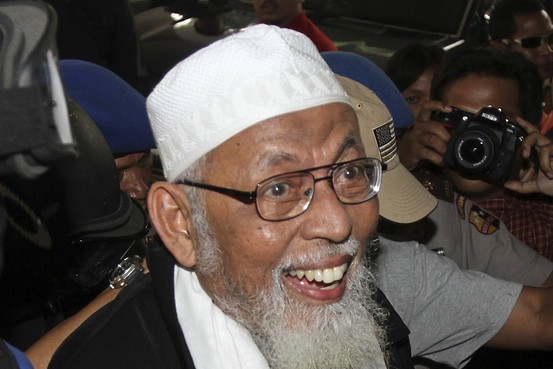 The youngest son of the firebrand Indonesian cleric behind the 2002 Bali bombings called his father a “victim” for believing in the teachings of Islamist extremists, and said he would tell him about “the serious wrongs that exist in Islamic State” when he is released from prison on Friday.
Abu Bakar Bashir, 82, is set to be freed from an Indonesian jail where he has spent almost 10 years. He was sentenced to 15 years jail in 2011 for supporting an extremist training camp in Aceh province that the police discovered and broke up in 2010, but had 55 months cut for good behaviour.

Bashir co-founded the al-Qaeda-linked Jemaah Islamiah, the group behind all of Indonesia’s major terror attacks from 1999 to 2010. The Bali bombings, which killed 202 people, including many foreign tourists and 11 Hong Kong residents, was the worst terror incident on Indonesian soil.

Bashir had previously been jailed and served a 30-month sentence for being part of a conspiracy behind the bombings but the Supreme Court quashed his conviction in 2006 on appeal. Bashir has always denied any involvement in the attack.

While in prison In 2014, he pledged allegiance to Islamic State – a commitment that he has yet to rescind.

Bashir’s son, Abdul Rohim, told This Week in Asia that he was previously unable to tell his father about the faults of Isis during prison visits because “time was limited when we met him” and it was “difficult to communicate and have a dialogue on such a sensitive matter as we were also monitored by officials and we were not at ease”.

But now, he said: “As his son, I have tasked myself right this moment, to tell him the serious wrongs that exist in Isis. That is my programme.”

Rohim, a teacher at the Islamic school that his father founded in Ngruki, Solo, in Central Java province, said his father had pledged support for Isis as he was “given wrong information” and believed what he was told – that Isis was fighting for the “true Islam” and the upholding of sharia laws.

He claimed Bashir “was a victim.”

“My father just wants to preach about the Holy Koran, the Prophet Mohamad, to teach Muslims to uphold sharia law,” Rohim said.

“To link him with terrorism … that becomes a problem,” he said, adding that he felt “sorry for my dad for that”.

Others, however, were more circumspect about Bashir’s release. Analysts said they believed that Isis supporters hope to embrace Bashir as their new spiritual leader, while a former counterterrorism police general said the country’s myriad radical groups will seek him out – not just Isis.

“His release is waited by supporters of Isis, who hope that he would become the leader or spiritual guide for them to replace Aman Abdurrahman,” said Muhammad Taufiqurrohman, senior researcher at the Jakarta-based Centre for Radicalism and Deradicalisation Studies (Pakar).

Aman Abdurrahman, who is currently in prison, is the spiritual leader of Indonesia’s largest Isis affiliate, Jemaah Ansharut Daulah (JAD). He was sentenced to death in 2018 for his role in planning and inciting others to commit terror attacks, including a 2016 gun and suicide bomb attack in downtown Jakarta that killed four people. No date has been set for his execution.

Taufiqurrohman said he believes Bashir will not take over the role of Aman Abdurrahman, who is Indonesia’s foremost Isis ideologue, because Bashir’s ideology is not as “extreme” as Aman’s.

“For sure Bashir will disappoint JAD-Isis supporters because he will not fulfil their hopes,” Taufiqurrohman said.

“I think he is too old and tired to be involved in the planning of terror attacks but would continue to teach extremism to Muslims in Indonesia,” he added.

Currently, the most prominent hardline cleric in Indonesia, Habib Rizieq Shihab, the leader of the Islamic Defenders Front (FPI) who returned to the country in November from self-exile in Saudi Arabia, is in detention for violating Covid-19 health protocols related to public gatherings of his supporters. The FPI was banned by the government last week.

Benny Mamoto, head of the National Police Commission and a retired police general who investigated the Bali bombings, told This Week In Asia that with the detention of Rizieq, the country’s radical groups no longer have a figure who can freely appear in public.

“The release of Bashir gives them a person whom they could hold up as a victim of the government or a victim of the security apparatus oppression, so to speak,” Mamoto said.

“What is needed is just a fatwa or directives or an invitation [from Bashir] to wage jihad to fight parties that are deemed to be oppressive,” for extremist groups to act, he said.

As someone who had pledged allegiance to Isis, Bashir’s words would either be “obeyed” or “exploited” by Isis supporters and other extremist groups, Mamoto said.

Mamoto said not all Jemaah Islamiah members agreed with Bashir’s pledge of allegiance to Isis, and have instead remained loyal to al-Qaeda. (Isis and al-Qaeda are rivals).

Faisal Aby Moubharok, director of the NGO Inter-Cultural Practice Research, which is involved in countering violent extremism, has advised Bashir’s son to limit the people who see his father to family members and not allow members of militant groups to visit.

Rohim said he agreed with Faisal’s advice, saying it was “good” and “right” and that he would abide by it.

“My father is now very old; I accept this advice,” he said. “Now is the time for my father to be with his family, children and grandchildren.”

Asked whether his father still had an interest in militant groups, Rohim said: “No, not any more. Father is now elderly. Physically, he is very weak. He will mostly rest at home.”

According to Faisal, Bashir’s long period in jail has not diminished his appeal, saying he holds a “huge influence” over “Indonesian jihadists” as he is seen as “the brains and inspiration” of jihadist and radical movements in the country.

In the eyes of Indonesian society in general, Bashir is viewed as a “radical Islamic figure”, Faisal added.

On Tuesday, Australian Foreign Affairs Minister Marise Payne said Indonesia must ensure that Bashir does not incite more violence when he is released.
“Our embassy in Jakarta has made clear our concerns that such individuals be prevented from further inciting others to carry out future attacks against innocent civilians,” Payne said in a statement.

Australia lost 88 citizens in the Bali bombings, the biggest group of victims in the blasts.