The Hejaz Railway: More than a means of transport 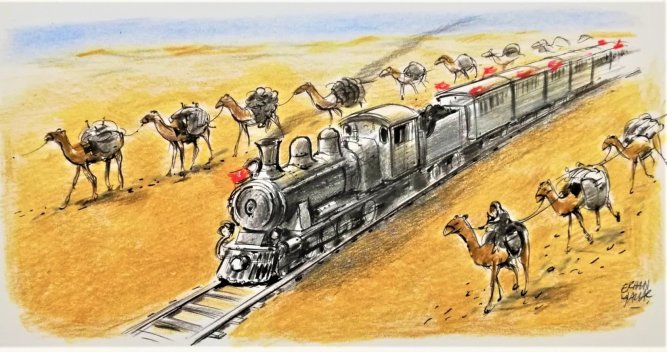 On Sept. 1, 1900, on the orders of Sultan Abdulhamid II, the Ottoman authorities started working on a 1,320 kilometer (820.2 miles) railway project, linking Medina to Damascus and eventually Istanbul in the north. The construction was finished in September 1908 and the railway remained in operation until it was destroyed in 1916 during World War I.

The economic, social and historical staging posts to project completion reflected the unique, tightly-knit regional fabric running down its rails – something that has since been buried by the new cultural outlook imposed on the region after WWI.

How many young people today know that the railway was funded by ordinary Muslims from all parts of the world through donations, charitable work and even the sale of personal jewelry? That the farmers affected by the railway lines going through their land refused to accept compensation from the Ottoman state? That Ottoman soldiers (Arabs and Turks) volunteered their time to the construction of the railway? That Arab families made sure their sons followed their fathers into revered railway careers?

The enthusiasm of those working on the project confounded European railway experts who declared it impossible to lay more than 100 kilometers of track in a year, only for the Ottomans to successfully lay 288 kilometers per annum.

The Hejaz Railway was more than a modern means of transportation to shuttle Muslim pilgrims to holy sites in Hejaz, a region in the west of today’s Saudi Arabia – replacing long, arduous camelback journeys.

The railway was referred to as “The Iron Silk Road” because of its vital political, economic and social influence on the region during its short lifetime. The English believed the railway carried a dual-purpose, extending Ottoman political and military sovereignty to regions they had an active interest in.

Therefore, the British actively encouraged Bedouin tribes, a population of nomadic Arabs, to attack the railway. Austria’s then-ambassador to Istanbul wrote on Jan. 15 1908 that, “this is a financial adventure unparalleled in modern commercial history. The entire Hejaz railway project shows that the Ottomans possess the talent to overcome any difficulties when they set their sights on achieving their goals.”

A British researcher said, “this is the first railway project in human history that had recovered its costs before a single ticket had been sold,” referring to the finances provided through Muslim donations eliminating the need for European bank loans.

The Hejaz Railway was not just an engineering project but a political, social and economic feat that captured the imagination of the Muslim people who followed its development. The process was watched by the world and brought international expertise to the region wanting to take part in the bold enterprise.

The railway project was the last strategic activity undertaken by the people of the region working together as a regional bloc with a common identity. It would also be the last time the world would interact with the region as a whole before it was divided into separate nations.

The continued stark absence of an Arab regional railway network comes at a time when Iran is actively pursuing establishing its own regional rail network, with clear vision and targets. The vision is to reclaim Iran’s historical position (at the crossroads of the old Silk Road) as the hub of the transportation network between Asia and Europe. The aim is to create a large network of railway lines, roads, bridges and tunnels within Iran to connect with neighboring networks.

These striking Iranian regional ambitions are made easier by new geopolitical realities in the Eastern Mediterranean region following the American invasion of Iraq in 2003 and the consequent collapse of the two countries that separate Iran from the shores of the Mediterranean: Iraq and Syria.

Iran has already laid thousands of kilometers of railway track, ready to be connected to other regional networks, with the extension of the Iranian network to the south of Iraq having already begun.

The Arab region’s logistical infrastructure was destroyed at the beginning of the 20th century and has been in ruins ever since and for over a century Arab countries have made no efforts to address the glaring shortfall. This failure has made the region a natural target for foreign logistical projects that threaten its unity and geographical coherence. When Germany’s first Chancellor Otto von Bismarck was told he unified Germany, he replied, “Not me, it was the railways.”

The burial of the idea

It is not difficult to understand why Thomas Edward Lawrence, also known as Lawrence of Arabia, the British spy who played a big role in the Arab Revolt during WWI, blew up the Hejaz Railway in 1916 with the cooperation of a group of Arabs looking to claim a promised Arab Crown.

However, it is difficult to comprehend why the railway was never revived and left buried under the sand where Lawrence and his partners left it (together with the regional implications of the decision), despite the urgent need for a transportation network in the region to link it to the outside world at a time when maritime travel was in decline.

The logistical vacuum in the Arab region will not be filled by one North-South railway line linking Istanbul with Hejaz. However, the Arab soft belly will be disembogued by the East-West line coming from Iran and passing through Iraq and Syria to reach the shores of the Mediterranean.

What’s more, this Iranian project is not the only one casting a long shadow over the region. The North-South corridor (India-Iran-Russia) comprised of a railway network, roads and waterways link India’s Indian Ocean ports through Iran with Russian ports on the Baltic Sea and beyond to northern Europe.

These transportation network wars will not render the Suez Canal a glorified fish pond, but they will shrink the distance between Europe and Asia from 16,129 km to 6,245 km and take 10-12 days off of the journey time, reducing costs by nearly 20%.

Arab waterways will become minor byways and the iron Silk Road that passes under the Bosporus coming from China to Europe will no longer be the only viable option for trading countries. This logistical battle will position itself alongside energy as a strategic card that can be played when pressure needs to be applied.

Today’s logistical wars are the fiercest they have been since the disappearance of the old Silk Road. If these projects are to succeed, it would signal the end of the region’s Ottoman geography and the end of a long battle that was triggered by a direct blow to the spine (the Hejaz railway) during WWI.

*Researcher and writer in Turkish-Arab strategic relations and Ottoman studies