Indonesia: A Major Prize in the Battle for the Soul of Islam 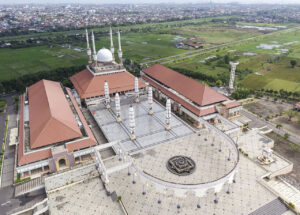 EXECUTIVE SUMMARY: Saudi support for religious ultra-conservatism in Indonesia contradicts Crown Prince Muhammad bin Salman’s promotion of an undefined form of moderate Islam intended to project his kingdom as tolerant, innovative, and forward-looking. It also suggests that Saudi Arabia is willing to work with the Muslim Brotherhood despite its denunciation of the group as a terrorist organization.

Mosques with three-tiered tiled roofs reflect traditional Javanese cultural houses of worship. They outnumber the rapidly growing number of Saudi-funded mosques, built by the Prosperous Justice Party (Partai Keadilan Sejahtera, or PKS), which sport a little dome rather than tiles as the third tier of the roof.

A plaque on the construction site of a mosque in a village in Central Java tells the story.

The plaque features the Saudi flag as well as the emblem of Vision 2030, Crown Prince Muhammad bin Salman’s plan to reform and diversify the kingdom’s economy.

The plaque thanks the World Assembly of Muslim Youth (WAMY) for the funding. WAMY is one of the government-controlled non-governmental organizations the Saudi government has used for almost half a century to fund the global spread of Islamic ultra-conservatism.

The story the plaque tells, however, goes beyond charitable Saudi support for the construction of houses of worship in the world’s largest Muslim-majority democracy.

It suggests that Indonesia is in a category of its own in a global rivalry for Muslim religious soft power in which Saudi Arabia, the UAE, and the southeast Asian state are major players.

It also calls into question Prince Muhammad’s shift away from religious legitimization and massive global funding of ultra-conservative religious institutions.

Finally, as in the case of Yemen, it casts doubt on the sincerity of the Saudi government’s labeling of the Muslim Brotherhood as a terrorist organization.

It shines a spotlight on religious soft power competition between the kingdom and the UAE and the two countries’ different approaches to harnessing faith in a bid to define what it stands for and how it is utilized to project the state as tolerant, pluralistic, and forward-looking.

To be sure, Prince Muhammad, since rising to power in 2015, has significantly curbed almost half a century of Saudi funding of ultra-conservative mosques, cultural and educational institutions, scholarships, and media across the globe that had been implemented in an effort to cement the kingdom’s leadership of the Muslim world and counter Iranian revolutionary ideology.

The Crown Prince has also nurtured a sense of nationalism as a pillar of Saudi identity, curtailing the power of the kingdom’s religious establishment and religion as a major legitimizer of the rule of the Al-Saud family.

Indonesia, however, is the exception that confirms the rule.

Welcomed by tens of thousands lining the streets of Jakarta, King Salman made the importance of religious investment in Indonesia clear on a visit to Indonesia in 2017, the first by a Saudi monarch in almost half a century, as part of an Asian tour that also took him to Malaysia, Japan, and China.

The monarch disappointed Indonesian leaders with the degree to which he was willing to invest in the country’s economy but was more generous when it came to spending on religious soft power.

Media reports suggested that the kingdom committed to building five mosques for the military and three new satellite campuses of the Saudi-funded Institute for Islamic and Arabic Studies (LIPIA) in Indonesian provinces.

Bahasa Indonesia, Indonesia’s official language, is virtually nonexistent on the grounds of LIPIA, a bastion of Saudi ultra-conservatism in the Indonesian capital affiliated with the Imam Muhammad ibn Saud Islamic University in Riyadh. LIPIA is dedicated to the teaching of Arabic.

LIPIA’s more than 3,000 students study tuition-free in gender-segregated classes. The institute frowns upon elements of social life that are denounced as forbidden innovations by Muslim ultra-conservatives, including music, television, and fun.

As in the case of Iran, it aims to counter a challenge, this time not from a militant rival but from an institution that threatens to bypass the kingdom as well as the UAE as a result of its moderation.

Widodo (also known as Jokowi) chose Ma’ruf Amin, a leader of Nahdlatul Ulama, as vice president for his second term.

Speaking three years after his initial endorsement at the laying of the ground stone of the International Islamic University (UIII) in West Java, Widodo threw down a gauntlet by declaring that it was “natural and fitting that Indonesia should become the (authoritative) reference for the progress of Islamic civilization.”

Widodo saw the university as providing an alternative to the Islamic University of Medina, which has played a key role in Saudi Arabia’s religious soft power campaign, and Al Azhar, the citadel of Islamic learning in Cairo, which is influenced by financially backed Saudi scholars and scholarship as well as Emirati funding.

The university is “a promising step to introduce Indonesia as the global epicenter for ‘moderate’ Islam’,” said Islamic philosophy scholar Amin Abdullah.

Saudi and Emirati concerns were initially assuaged when Widodo’s aspirations were thwarted by critics within his administration.

A six-page proposal to enhance Indonesian religious soft power globally put forward by Nahdlatul Ulama at the request of Pratikno, Widodo’s minister responsible for providing administrative support for his initiatives, was buried after the foreign ministry warned that its adoption would damage relations with the Gulf states, according to the author of the paper.

That could have been the end of the story.

But neither Saudi Arabia nor the UAE anticipated Nahdlatul Ulama’s determination to push its concept of humanitarian Islam globally, including at the highest levels of government in western capitals as well as in countries like India.

Nor did they anticipate Widodo’s willingness to play both ends against the middle by supporting Nahdlatul Ulama’s campaign while engaging on religious issues with both the Saudis and the Emiratis.

Nahdlatul Ulama’s success in accessing European leaders as well as the Trump administration left the Saudis and the Emiratis with two choices: co-opt or be seen to engage.

While the UAE opted to co-opt with pledges of massive economic investment and religious cooperation, Saudi Arabia, pressured by influential figures in the West, put up a botched effort to be seen as engaging.

In an unprecedented move, Muhammad Issa, the secretary general of the Muslim World League (MWL), a prime Saudi vehicle for the global projection of religious ultra-conservatism that Prince Muhammad converted into a tool for the promotion of his concept of moderate Islam, visited the headquarters of Nahdlatul Ulama in February in Jakarta.

It was the first visit to one of the world’s foremost Islamic organizations in the League’s almost 60-year history. Although active on social media about their various engagements, neither the League nor Issa referred on platforms like Twitter to their meeting with Nahdlatul Ulama.

Issa had turned down an opportunity to meet two years earlier when a leading Nahdlatul Ulama cleric and he were both in Mecca at the same time.

Issa had told a Western interlocutor who was attempting to arrange a meeting that he had “never heard” of the Indonesian scholar and could not make time “due to an extremely busy previous schedule of meetings with International Islamic personalities” that included “moderate influential figures from Palestine, Iraq, Tunisia, Russia, and Kazakhstan.”

Saudi Arabia was forced several months later in the run-up to the 2019 Indonesian presidential election to replace its ambassador in Jakarta, Osama bin Muhammad Abdullah Shuaib. The ambassador had denounced in a tweet—which has since been deleted—Ansor, the Nahdlatul Ulama young adults organization, as heretical, and he had supported an anti-government demonstration.

During his February visit, Issa signaled his intentions by taking with him to the group’s headquarters Hidayat Nur Wahid, a leader of the Indonesian PKS, the Muslim Brotherhood aligned-political party and a staunch rival of the National Awakening Party (or PKB), which is closely associated with Nahdlatul Ulama.

Wahid is also a Muslim World League supreme council member and on the advisory board of the Saudi-funded King Abdullah bin Abdulaziz International Centre for Interreligious and Intercultural Dialogue (KAICIID) in Vienna.

However, Widodo’s office barred Wahid from attending Issa’s meeting with the president.

Tellingly, pleading commitments in Indonesia, Wahid had bowed out of a groundbreaking visit to Auschwitz by 25 prominent Muslim leaders headed by Issa weeks before the Muslim World League chief traveled to Indonesia, according to sources familiar with the arrangements for the visit.

Critics suggested that Wahid, who had criticized an earlier visit to Jerusalem by a Nahdlatul Ulama leader at the invitation of the American Jewish Committee, would have been going out on a limb by joining the delegation to Auschwitz.

“This is the Saudis playing a double game,” said a leader of the Nahdlatul Ulama.

PKS’s links to the Muslim Brotherhood and its apparent reluctance to buy into Saudi Arabia’s and the Muslim World League’s agenda of a nominally tolerant and pluralistic Islam that engages with powerful Jewish communities as well as Israel has not prevented the kingdom from ensuring that the party benefits from its financial largesse.

Back in Javanese villages, PKS’s building of mosques with Saudi money is paying off.

Contrary to Javanese tradition, the mosque in the central Javanese village was named after the Saudi benefactor who funded the construction through the World Assembly of Muslim Youth. “We don’t name mosques after human beings,” complained a Nahdlatul Ulama villager.

A Palestinian flag fluttered suddenly from the roof of the village’s pickup truck hub from where farmers transport their produce to market, with few residents recognizing what it represented.

Rather than taking the flag down, Nahdlatul Ulema changed the tenor of its religious education and events in the village, reverting back to the nationalistic and militaristic themes of Banser, the five-million-member militia of Ansor, its young adults wing. It potentially set the stage for a confrontation if the PKS continued its agitation.

The 2019 elections were nonetheless proof of PKS’s Saudi-backed success.

The party won more than 20% of the vote in a village in which historically one could count votes on the fingers of one hand.

“The war songs and events attended by Banser members in uniform are sending a message. It’s a message that is being heard by the other side. Banser was always strong in our area but now people are lining up,” said a prominent Nahdlatul Ulama member in the village.

He suggested that the parties were keeping the peace in the village for now, but that could change if and when Nahdlatul Ulama decides its militia has no choice but to step in. It would not be the first time the militia has successfully confronted more militant hard-core Islamist groups on the streets of Java.

Speaking in a video of a webinar hosted by the Religious Freedom Institute, Karnavian pointed to strands of religion that have “inherent teachings of intolerance such as Salafism. It’s not an Indonesian strand of Islam, of course, being imported… This is happening today in Indonesia… They want to envision the establishment of Indonesia as an Islamic state… Sharia being implemented (would be) the break-up of the country.”

Dr. James M. Dorsey, a non-resident Senior Associate at the BESA Center, is a senior fellow at the S. Rajaratnam School of International Studies at Singapore’s Nanyang Technological University and co-director of the University of Würzburg’s Institute for Fan Culture.