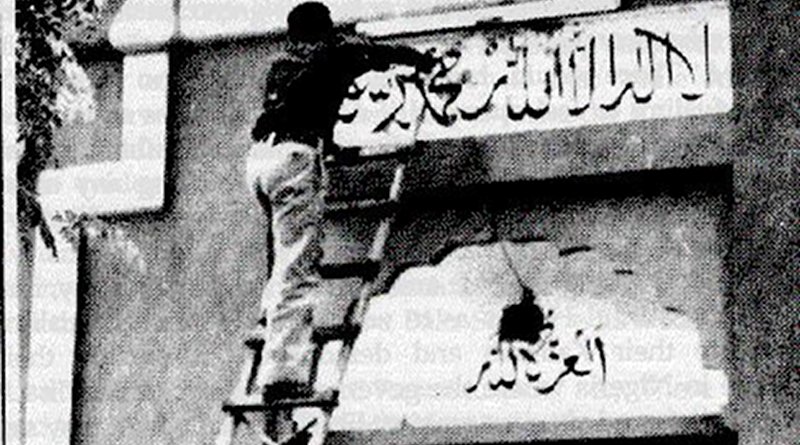 The Shahada, the basic creed of Islam and of Ahmadi Muslims being erased by Pakistani police. Photo Credit: Markazan-e-Tasaweer, Wikipedia Commons

On August 13, 2020, a 61-year-old Ahmadi man, Meraj Ahmed, was shot dead near his medical store in the Dabgari Gardens area of Peshawar, the provincial capital of Khyber Pakhtunkhwa (KP).

On July 29, 2020, Tahir Naseem, a US citizen and an Ahmadi, accused of blasphemy, was shot dead inside a District Court in Peshawar, in the presence of security and the presiding judge. Though he was killed as an Ahmadi, Saleem ud Din, spokesman of the Jamaat Ahmadiyya Pakistan, later claimed, “He was born Ahmadi but left the community many years ago. Therefore, to avoid any misinformation, I would like to clarify that the deceased was not part of Jamaat Ahmadiyya.”

Jamaat Ahmadiyya Pakistan is an organisation that, among other things, watches over the religious, economic and political interests of Ahmadis in Pakistan.

On July 15, 2020, graves of members of the Ahmadi community were desecrated in Tirigiri village of Gujranwala District in Punjab Province, as Quranic verses were written on these graves. Pakistani law prohibits Ahmadis from calling themselves or “posing as” Muslims.

On February 29, 2020, three graves belonging to Ahmadis were allegedly desecrated by the Police in the Khushab District of Punjab Province.

According to partial data collated by South Asia Terrorism Portal (SATP), these were the five reported incidents in 2020 in which the Ahmadi community was targeted (data till August 23, 2020). Two of these incidents resulted in one fatality each. Since March 6, 2000, when SATP started compiling data on conflicts in Pakistan, at least 128 Ahmadis have been killed and 113 injured in 28 incidents of killing.

The worst ever attack targeting the Ahmadis took place on May 28, 2010. 94 people were killed when two Ahmadi mosques were targeted in Lahore, the provincial capital of Punjab, in attacks that included grenades, small arms fire and two suicide bombers. 27 people were killed at the Baitul Nur Mosque in Lahore’s Model Town area and 67 people died at the Darul Zikr Mosque in the suburb of Garhi Shahu. The Punjabi Taliban, a local affiliate of Tehrik-e-Taliban Pakistan (TTP), had claimed responsibility.

Britain’s All-Party Parliamentary Group for the Ahmadiyya Muslim Community in its Report titled, “Suffocating the Faithful: The Persecution of Ahmadi Muslims in Pakistan and the Rise of International Extremism”, published in July 2020, stated that between 1984 and July 2020, at least 269 Ahmadi Muslims have been killed on grounds of faith. The report also explains the abuse Ahmadis experience in educational institutions,

Young Ahmadi Muslims face a constant risk of being denied access to education and those who secure a place are routinely targeted and stigmatised through physical and emotional abuse at the hands of teachers and fellow pupils.

Indeed, apart from death and desecration, the Ahmadi community faces constant oppression and discrimination in eligibility to hold government positions, in contesting elections, in their businesses, and in destruction of their homes and places of worship. Ahmadi Muslims are prevented by law from publishing and possessing their core religious texts, crucially including the Holy Quran. As reported on January 10, 2020, the Punjab Assembly’s Special Committee decided to ban the Ahmadi newspaper, Al-Fazl. This, in a state and a country where dozens of terrorist organisations openly publish multiple magazines.

The oppression and suppression faced by Ahmadis are at the behest of the Pakistani establishment. Noor-ul-Haq Qadri, Pakistan’s Federal Minister for Religious and Inter-faith Harmony Affairs, declared in May 2020 that any form of “soft-heartedness” toward the Ahmadis was both un-Islamic and un-patriotic,

Whoever shows sympathy or compassion towards [Ahmadis] is neither loyal to Islam nor the state of Pakistan.

Unsurprisingly, the National Commission for Minorities (NCM), constituted in May 2020 has no member from the Ahmadi community. Initially, it was suggested that Ahmadis should get a representation in the Commission, but, as reported on May 18, 2020, Prime Minister Imran Khan rejected that idea after it sparked severe criticism from orthodox Sunnis who consider the Ahmadi belief an insult to Islam.

Moreover, under the Pakistan Penal Code (PPC), fundamental religious rights are denied to Ahmadis in Pakistan. Ordinance XX prohibits Ahmadis from self-declaration as a Muslim, to make azaan (prayer call), from paying zakat (alms), from observing fast during Ramzaan, and from making pilgrimage to Mecca. PPC 298 C , thus states,

Person of Quadiani group, etc., calling himself a Muslim or preaching or propagating his faith:-Any person of the Quadiani group or the Lahori group (who call themselves ‘Ahmadis’ or by any other name), who directly or indirectly, poses himself as a Muslim, or calls, or refers to, his faith as Islam, or preaches or propagates his faith, or invites others to accept his faith, by words, either spoken or written, or by visible representations, or in any manner whatsoever outrages the religious feelings of Muslims shall be punished with imprisonment of either description for a term which may extend to three years and shall also be liable to fine.

The Ahmadi community, accepted as a minority sect of Islam at the time of the country’s independence in 1947, became the first minority group to be targeted for sectarian violence when anti-Ahmadi riots broke out in 1953 in Lahore, leading to the first imposition of Martial Law in the country’s history, limited to Lahore. 2,000 Ahmadis were killed in violent protests.

Later, in 1974, under Zulfikar Ali Bhutto’s Administration, the Parliament brought the Second Amendment to the 1973 Constitution, and declared the Ahmadis non-Muslims. Unlike all other Muslims in the country, Ahmadis were prohibited from calling their place of worship a mosque and saying the common Islamic greeting of Assalamo Alaikum (Peace be upon you ) or reading the Kalima (the testimony of faith).

Further, in 1985, the then President Zia ul Haq pushed through the Eighth Amendment to the 1973 Constitution in Parliament, which was accompanied by a series of laws effectively creating a separate electorate system for non-Muslims, including Ahmadi Muslims. Moreover, according to the Amendment, they cannot hold government office without publicly denouncing Mirza Ghulam Ahmad, the founder of the Ahmadi community.

The status of the Ahmadis has become precarious. Several reports have highlighted the pathetic conditions of the sect, including the International Human Rights Committee report, Ahmadis in Pakistan Face an Existential Threat, published in 2017, which demonstrates that Ahmadis in Pakistan are violently targeted, intimidated, harassed and persecuted at all levels of society. It also testifies to the grave injustices that are meted out to minority religious groups such as Ahmadi Muslims. Likewise, South Asia Democratic Forum’s report, Persecution against the Ahmadiyya Muslim Community in Pakistan: A multi-dimensional perspective, published on May 10, 2019, underlined the multifaceted and multidimensional persecution of Ahmadis in Pakistan in all spheres of public and private life.

More recently, the US States Commission on International Religious Freedom in its Annual Report 2020, released in April 2020, explaining the situation of Ahmadi community of Pakistan, noted,

Ahmadi Muslims, with their faith essentially criminalized, continued to face severe persecution from authorities as well as societal harassment due to their beliefs, with both the authorities and mobs targeting their houses of worship.

In February 2020, Pakistan’s Prime Minister Imran Khan, declaring that minorities are equal citizens of his country, had issued a warning that anyone targeting the non-Muslim population of Pakistan would be strictly dealt with. Regrettably, Khan has failed to back words with convincing action, as evident in the failure to include an Ahmadi representative in the NCM, and also to ensure effective legal action in any of the continuous stream of cases of atrocity and discrimination targeting Ahmadis. Ahmadis, like other religious minorities in Pakistan, continue to face violence and discrimination, targeted by acts of vandalism and violence, forced to declare themselves as “non-Muslims” and prohibited by law from professing or practicing their faith.

SATP, or the South Asia Terrorism Portal (SATP) publishes the South Asia Intelligence Review, and is a product of The Institute for Conflict Management, a non-Profit Society set up in 1997 in New Delhi, and which is committed to the continuous evaluation and resolution of problems of internal security in South Asia. The Institute was set up on the initiative of, and is presently headed by, its President, Mr. K.P.S. Gill, IPS (Retd).