BY DAILY SABAH WITH AP 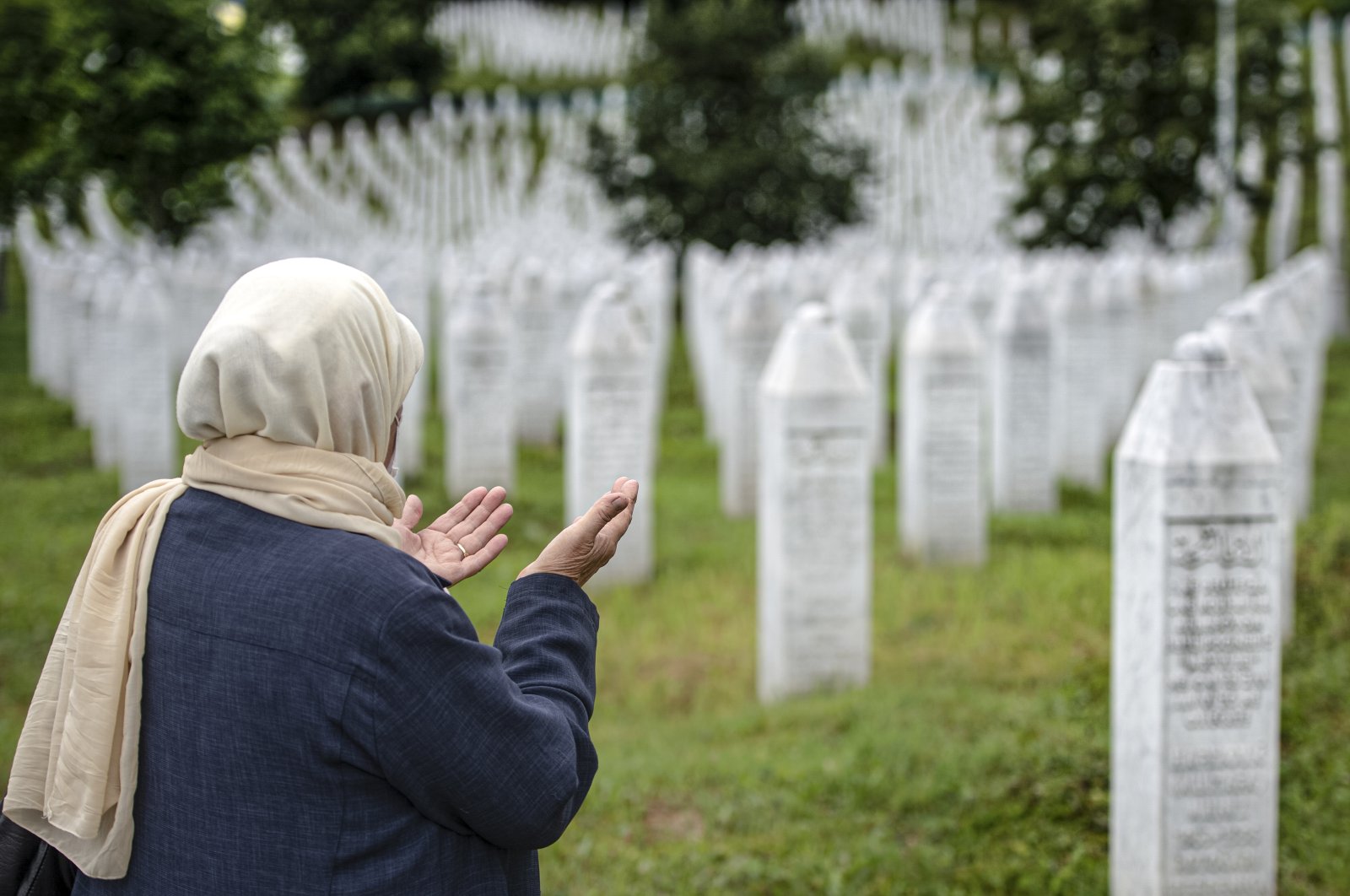 A woman prays at the memorial cemetery in Potocari, near Srebrenica, Bosnia-Herzegovina, July 7, 2020. (AP Photo)

While the international community has long turned away from the unending pain of the Bosnians, Bosnian Muslims are still unearthing the bones of their loved ones killed in Europe’s worst massacre since World War II

Bosnians are marking the 25th anniversary of the unprecedented horror of the genocide in Srebrenica, caused by Serbian forces, which resulted in the deaths of over 8,000 Bosnian Muslims who perished in days of slaughter. The pain is experienced anew every year by Bosnians, as this year, eight Bosnian men and boys will be laid to rest Saturday in a cemetery just outside of Srebrenica – their marble gravestones joining thousands more, each with the same month and year of death.

The worst massacre in Europe since World War II was classified as genocide by the International Criminal Tribunal for the former Yugoslavia (ICTY). Since 1996, Bosnian and international scientists have slowly unlocked what was once described as the “biggest forensic puzzle anywhere in the world,” unearthing the bones from those gruesome death pits and connecting them with the names of the people they belonged to.

When the remains are identified, they are returned to their relatives and reburied in the Potocari memorial cemetery. And each year on July 11, the anniversary of the day the killing began in 1995, relatives gather for a funeral of the recently identified. Most of the dead were men and boys, so most of the mourners are women – mothers and sisters, daughters and wives.

Amid unending pain, mothers of Srebrenica last year urged Europe’s foremost human rights organization, the Council of Europe, to adopt July 11 as an official remembrance day for the victims of the Srebrenica genocide.

Hundreds of Bosniak families are still searching for missing people as a large number of victims were thrown into mass graves around the country during the 1992-1995 Bosnian War. Since the war’s end, more than 8,000 people remain missing, according to the Institute for Missing Persons in Bosnia and Herzegovina. Every year, the remains of more victims are identified and buried in Potocari on the anniversary of the genocide.

On July 11, 1995, Bosnian Serb militia forces under the command of Ratko Mladic entered Potocari, which was under the protection of Dutch soldiers who were part of the United Nations Protection Force in Bosnia. The army of Bosnian Serbs held all U.N. soldiers captive and captured Srebrenica. That night, all the refugee women and children taking shelter in the U.N. camp in Potocari were forced to get on buses and trucks and leave the city. In front of the eyes of the entire world, the Serbian soldiers held more than 1,500 Muslim men captive for 10 days and tortured, raped and killed them, regardless of their age.

When the mass graves were opened years after the genocide, DNA results revealed that the Bosnian Serb soldiers systematically killed three generations of male members of the same family. The first funeral for the victims of Srebrenica took place in 2010 and the remains of 8,372 Muslim men were buried in the martyrs’ cemetery across from Potocari. Following the funerals, the women who were forced to leave the city began to return to Srebrenica to be close to the graves of their loved ones.

During this genocide attempt, world powers confined themselves to watching these scenes of horror. However, after the Bosnians were butchered and subjected to unprecedented brutality, the international powers decided to intervene in the ongoing war and stop the Serbian forces.