Beirut, Lebanon (CNN)A young man with a swagger approaches a dumpster. An employee from a nearby restaurant has just dumped a trash bag inside. He scoops the bag up, rummaging through it to look for leftover hummus and beans. Finding a half-smoked cigarette, he lights it, and puts it to his lips. Then, wiping his hands on his black shirt, he pokes his head into the container one last time, to check there’s nothing else he can use, before walking away.

Two blocks away, on Beirut’s bustling Hamra Street, a baby stroller lies atop a pile of garbage bags. “What do you think? Could we use this?” A veiled, middle-aged woman asks her young daughter. The woman holds up the contraption, examining its contorted pink rods.
Across the country, elderly couples sift through refuse together, and young men scrounge for clothes and shoes to bring back to their families.
Many of them cower when approached by cameras and journalists. “Please, just go to the other side of the street. Go far away,” one man, searching through a Beirut dumpster, told a CNN crew.
For many of those scavenging for goods in Lebanon, poverty is a new, and bitter, experience. 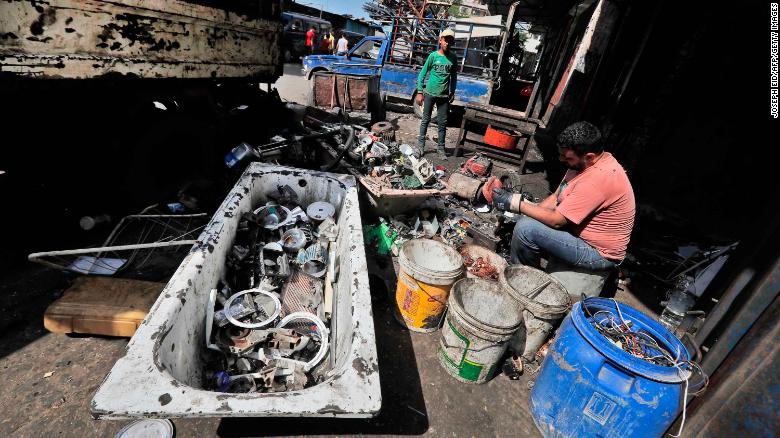 A man dismantles and sorts through discarded electric devices at a scrap workshop in the Bab al-Tabbaneh neighborhood of Lebanon’s northern city of Tripoli on June 3, 2020.
Earlier this year, the World Bank projected that at least 50% of the country would become poor — up from nearly 30% last October.
As Lebanon entered a Covid-induced lockdown earlier this year, the destruction of the middle class remained largely out of sight, but now, as it reopens, there’s no escaping the dystopian scenes of desperation repeated across the country.
Nearly every day, the snowball effect of Lebanon’s economic meltdown brings new developments. For weeks, the country’s currency has been in free-fall, losing 60% of its value in the last month alone.
People’s life savings, locked up by the banks’ discretionary capital controls, imposed since November, are largely believed to have gone up in smoke.
Doctors and university professors who, just a few months ago, were considered upper-middle class are now making the equivalent of a few hundred dollars a month.
Meanwhile, prices have surged — the situation is verging on hyper-inflation — and fuel shortages have plunged the country into darkness, with power outages lasting almost 24 hours
read more here: