Remains of ‘Lady in the Well’ in Turkey reveal Asia to Med migration began 4,000 years ago

West Asia, which includes Anatolia, the Northern Levant and the Southern Caucasus, is seen in this partial map. The orange marker shows the route from Central Asia. (Max Planck-Harvard Research Center / via Reuters)Remains of ‘Lady in the Well’ in Turkey reveal Asia to Med migration began 4,000 years ago 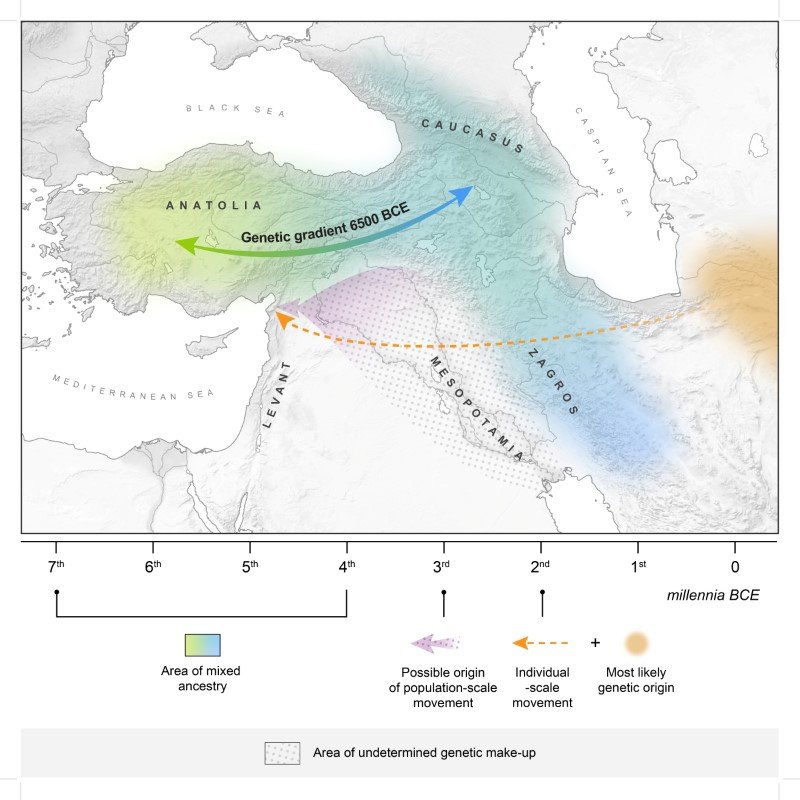 The bones of a woman of Central Asian descent found at the bottom of a deep well after a violent death in an ancient city in Turkey are helping scientists understand population movements during a crucial juncture in human history.

Researchers have dubbed her the “lady in the well” and her bones were among 110 skeletal remains of people who lived in a region of blossoming civilization running from Turkey through Iran between 7,500 and 3,000 years ago. The study provided the most comprehensive look to date of genetics revealing the movement and interactions of human populations in this area after the advent of agriculture and into the rise of city-states, two landmarks in human history.

The remains of the “lady in the well,” found in the ruins of the ancient city of Alalakh in southern Turkey, illustrated how people and ideas circulated through the region.

The international team of researchers showed populations from Anatolia and the Caucasus started genetically mixing around 6,500 B.C. and that small migration events from Mesopotamia 4,000 years ago brought more genetic mixture to the region. DNA from the lone ancient woman revealed proof of long-distance migration during the late Bronze age about 4,000 years ago from Central Asia to the Mediterranean Coast.

“How and why a woman from Central Asia – or both of her parents – came to Alalakh is unclear,” said Ludwig Maximilian University Munich archaeologist Philipp Stockhammer, co-director of the Max Planck-Harvard Research Center for the Archaeoscience of the Ancient Mediterranean and co-author of the study published in the journal Cell.

“Trader? Slaves? Marriage? What we can say is that genetically this woman is absolutely foreign, so that she is not the result of an intercultural marriage,” Stockhammer added. “Therefore, a single woman or a small family came this long distance. The woman is killed. Why? Rape? Hate against foreigners? Robbery? And then her body was disposed in the well.”