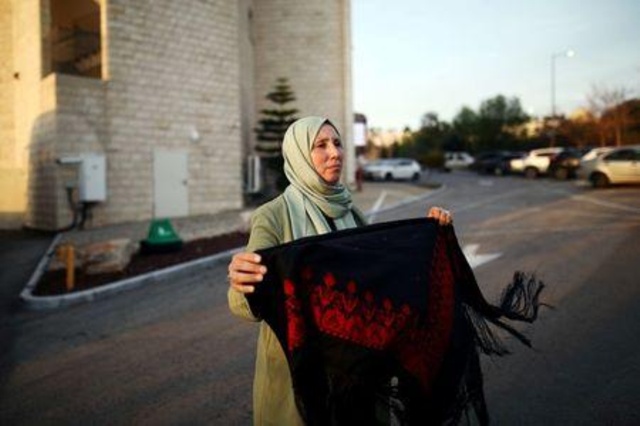 Iman Yassin Khatib, poised to become the first lawmaker in Israel’s history to wear a hijab or head scarf, which she does as a Muslim, following results of her Arab Joint List party in Israel’s election, holds a traditional Palestinian scarf in Nazareth, Israel March 5, 2020. Picture taken on February 5, 2020. REUTERS/Ammar Awad
(reuters_tickers)

NAZARETH, Israel (Reuters) – A female Muslim lawmaker from Israel’s Arab minority is set to become the first in parliament to wear a hijab, or head scarf, after Arab parties won their largest ever showing in this week’s election.

Iman Yassin Khatib, 55, won a place on the Joint List coalition’s slate of 15 seats in the 120-member Knesset.

The party draws most of its votes from Israel’s 21% Arab minority – who are Palestinian by heritage but Israeli by citizenship.

The mother of four served as the manager of a community centre in the Galilee village of Yafat an-Nasreh on the outskirts of Nazareth, the city where Jesus grew up, before entering national politics.

“There is no way (the hijab) won’t capture people’s attention. But what’s more important is what is inside: the ability and potential to advance our community,” said Khatib as she accepted congratulations and posed for selfies on a street in Nazareth.

Khatib said she felt her hijab had sometimes stirred anti-Islam sentiment in Israel, whose nine million population is mostly Jewish.

“Every challenge I faced in my life was made harder because I wear a hijab,” she said. But she urged people to “look beyond the veil”.

Israel’s Arab minority is mostly descended from the Palestinians who lived under Ottoman and then British colonial rule before staying in Israel after the country’s 1948 creation.
It is predominantly Muslim, but also includes members of the Christian and Druze faiths.

Many Arabs complain of discrimination in areas such as health, education and housing, and their leaders accused Prime Minister Benjamin Netanyahu of incitement against them during recent elections.

Netanyahu’s Likud party counters that its 15 billion shekel ($4.34 billion) investment plan for the Arab sector is the largest ever by an Israeli government.

Arab voter turnout surged to 64.7% in Monday’s election, its highest in 20 years. That gave the Joint List coalition two more seats in parliament than in last September’s ballot.

It is the third-largest party in the Knesset after Netanyahu’s Likud and the centrist Blue and White Party. But its influence will likely be limited since no Arab party has ever joined an Israeli government.

Analysts cited anger toward Netanyahu and his U.S. ally President Donald Trump as one reason for the surge in Arab voters in this election, the third in a year.

Khatib is one of four women lawmakers among the Joint List’s Knesset members. She belongs to its Islamist faction, Ra’am, which campaigns for more services and rights for Arabs in Israel, and supports the creation of a Palestinian state.

“There is a growing awareness amongst Arab women that we can be active participants in our future,” said Khatib.

“My message to young women: there is a possibility. There is a way. Don’t limit your hopes and dreams.”

Iman Khatib-Yasin (Arabic: ايمان خطيب-ياسين‎, Hebrew: אימאן חטיב-יאסין; born 1965) is an Israeli Arab social worker and politician. A member of the United Arab List party, she was elected to the Knesset in 2020 as a member of the Joint List, becoming the first woman from the United Arab List and the first hijab-wearing woman elected to the Knesset.[1]

Originally from Arraba, Khatib-Yasin studied for a bachelor’s degree in social work at the University of Haifa and a master’s degree in women’s affairs at Tel Aviv University.[1] She also graduated from the Mandel College for Leadership.[2] She was employed as a social worker, and ran a community centre in Yafa an-Naseriyye.[2]