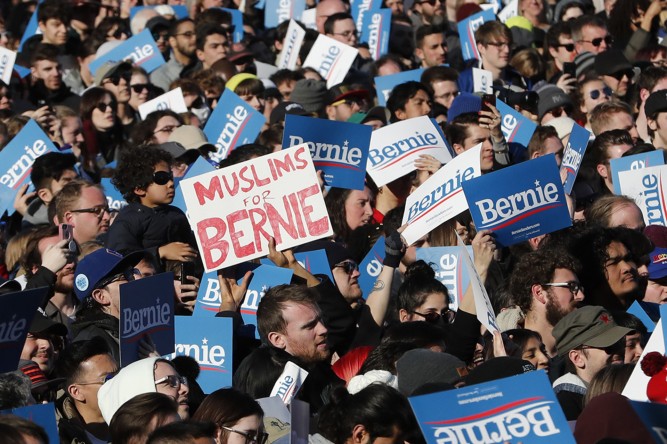 The Muslim Times has been supporting Senator Bernie Sanders all along

DEARBORN, Mich. — Muslim and Arab-American voters were critical to Bernie Sanders’ upset victory in Michigan that gave his 2016 campaign a second life.

On Tuesday, he’s counting on them again to help revive his bid for the White House.

The Vermont senator has won endorsements from key Muslim elected officials here, tapped Muslim leaders to be his top surrogates, and held a rally this week in one of the largest Muslim communities in the country. But for Sanders to succeed, it’s not enough for Muslim voters in Michigan to simply support him: He also needs them to come to the polls in droves, something that hasn’t happened among some crucial pro-Sanders voting blocs in early primary contests.

“It’s potentially significant if it’s going to be a close contest between him and Joe Biden in Michigan,” said Wa’el Alzayat, CEO of Emgage, a major Muslim political action committee that has endorsed Sanders. “But the key is turnout. Historically, Muslims in Michigan do not vote at high rates.”

In order for such voters to push Sanders over the edge, however, the race indeed must be as narrow as Sanders’ team thinks it is. According to Emgage, there are between 100,000 and 200,000 Muslim voters in Michigan, which is a small portion of the electorate: More than 2.5 million people voted in the state in the 2016 Democratic and Republican primaries.

After Biden won 10 states on Super Tuesday, including several that Sanders was expected to carry, Michigan’s primary is close to a do-or-die election for Sanders. Michigan has the largest share of delegates out of the six states voting on March 10 — and perhaps even more significantly, a loss in the crucial general election state would shatter his argument that he’s the best candidate to defeat President Donald Trump.

“The key is turnout. Historically, Muslims in Michigan do not vote at high rates.”

Sanders has long made the case that his economically populist agenda, including his longtime opposition to free trade deals, would enable him to win the industrial Midwest and with it the Electoral College. But Democrats in Michigan, as well as Sanders’ aides and allies, say the race between him and Biden is tight, and a recent poll by Detroit News/WDIV-TV found Biden in the lead by seven percentage points.

“Remember, I’m the one who four years ago this weekend said that to you all I think Bernie Sanders will win my district,” said U.S. Rep. Debbie Dingell, who represents Michigan’s 12th District, which includes Dearborn, home to a large Muslim and Arab-American population. This year, she said, Michigan “is competitive. … I think the senator is going to have to work hard to keep the victory he had four years ago.”