Africans Discovered America Around 1292 BC, Not Columbus – Read The Complete History

During four separate voyages to discover the so-called new world, Columbus landed on various Caribbean islands that are now known as the Bahamas as well as the island later called Hispaniola. He started with the first one in 1492. He later traveled and explored the Central and South American coasts.

But he never reached North America, which, of course, was already inhabited by Native Americans, and other African civilizations, and he never thought he had found a new continent.

It is also important to note that the Norse explorer Leif Erikson reached Canada perhaps 500 years before Columbus was born, and there are some who believe that Phoenician sailors had crossed the Atlantic much earlier than that.

We will go straight into debunking this lie with a detailed account of his travels and where i ended for him. And we are going to start with excerpts from a book titled “Before Columbus: How Africans Brought Civilization to America” By Garikai Chengu.

Some excerpts from it read: ” The great ancient civilizations of Egypt and West Africa traveled to the Americas, contributing immensely to early American civilization by importing the art of pyramid building, political systems, and religious practices as well as mathematics, writing and a sophisticated calendar.” 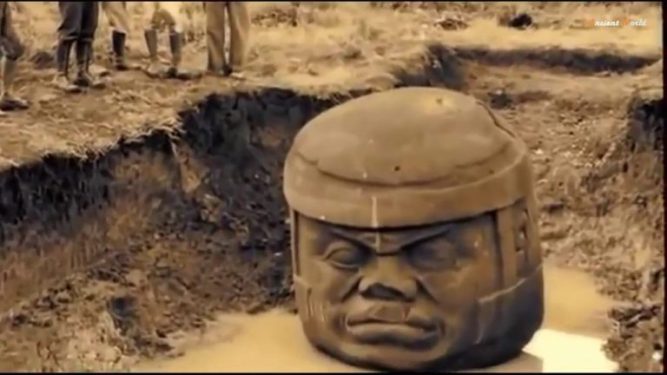 Also, it stated that “One of the first documented instances of Africans sailing and settling in the Americas were black Egyptians led by King Ramses III, during the 19th dynasty in 1292 BC. In fact, in 445 BC, the Greek historian Herodotus wrote of the Ancient Egyptian pharaohs’ great seafaring and navigational skills. Further concrete evidence, noted by Dr. Imhotep and largely ignored by Euro-centric archaeologists, includes “Egyptian artifacts found across North America from the Algonquin writings on the East Coast to the artifacts and Egyptian place names in the Grand Canyon.”

In 1311 AD, another major wave of African exploration to the New World was led by King Abubakari II, the then ruler of the fourteenth century Mali Empire. It is accounted that the Mali empire was larger than the Roman Empire. King Abubakari II sent out 200 ships of men, and 200 ships of trade material, crops, animals, clothing and crucially African knowledge of astronomy, religion and the arts.

When most people and even scholars think about ancient Mexico, the first civilizations that come to mind are the Incas, Aztecs and the Maya. However, during the early 1940′s archeologists uncovered a civilization known as the Olmecs of 1200 BC, which were found to pre-date any other advanced civilization in the Americas.

Archaeological discoveries point to the fact that the Olmec civilization, which was of African origin and dominated by Africans, was the first significant civilization in Mesoamerica and the Mother Culture of Mexico.

The Olmecs were/are predominantly best known for the carved colossal heads found in Central Mexico, that exhibit an undeniable African Negroid appearance. Ancient African historian, Professor Van Sertima has illustrated and described how Olmecs were the first Mesoamerican civilization to use a written language, sophisticated astronomy, arts, and mathematics. And they built the first cities in Mexico, all of which greatly influenced the civilization of the Mayans and subsequent civilizations in the Americas.

A leading historian on Mexico, Michael Coe, once said that “There is not the slightest doubt that all later civilizations in [Mexico and Central America], rest ultimately on an Olmec base.”

It is historically clear that Africans played an intricate role in the rise of the Olmec Empire and that African influence peaked during the same period that ancient Black Egyptian culture ascended in Africa.

On the Monday of the second week in October, Columbus Day is celebrated in western culture in general and in America’s specifically. This is basically an American tradition where school children of all ages are taught about his so-called discovery of his New-World. Annual parades are carried out around the country, and every year dignitaries participate in these festivities.

It is most unfortunate that most people celebrate his holiday without knowing the truth about Columbus’s purpose for taking such risky voyages, and his atrocious behavior against the indigenous population, together with the brutality against his own men.

At the other end of the spectrum, the impact of Columbus’s deeds has been most devastating on the indigenous people together with African communities everywhere. For a better understanding of what we are exposing, three historical events before Columbus’s four voyages are presented, along with the reasons for each voyage.

The first event is said to have occurred when the African Berbers/Moors conquered the Iberian Peninsula (present-day Portugal and Spain). Back then the conquered territory was identified as Andalusia and at that time was most of Spain, Italy, parts of France, Portugal and Gibraltar. Their conquest began in 711 AD and lasted up to the ‘fall of Granada’ on January 2, 1492.

The second event was the conquest of Ceuta, which was an Islamic city in North Africa by the Portuguese in 1415. Notably, that was more than three decades before the fall of Constantinople in 1453. In the meantime, Portuguese sailors sailed beyond Cape Bojador, Morocco, in the 1430s for the first time.

A trading post was established, by 1445, on the small island of Arguim, off the shores of present-day Mauritania. As the Portuguese ships and traders continued to explore coastlines and rivers over the following decades, they established trade with the preexisting industries. The Portuguese traders procured various west African commodities such as ivory, peppers, textiles, wax, grain, copper. The also bought captive African slaves for export. At this time, the African slaves were only used as servants in Europe.

In addition to the building of trading posts, Portugal established colonies on previously uninhabited islands off the African shores. These trading posts later served as collection points for captive slaves, and commodities to be shipped to Europe, and eventually sent to their colonies in the Americas. After several generations, a Portuguese navigator Bartolomeu Dias sailed around the ‘Cape of Good Hope’ in 1488 and opened up European access to the East Indies.

By the end of the 15th century, Portuguese merchants could bypass commercial, political, and military strongholds in both North Africa and in the Eastern Mediterranean Sea. They were successful in using maritime routes to avoid trans-Saharan overland trade routes controlled by Islamic Turks of the Ottoman empire.

The third event occurred in 1453 when the Islamic Ottoman Turks successfully subdued and captured Christian Constantinople (present-day Istanbul). Constantinople was formerly western Europe’s major source for spices, paper, porcelain, silks, glass, and other luxury goods produced in India, China, Japan, and the spice islands (present-day Indonesia). Collectively these areas were known as the East Indies, and the silk road trade route was shut down by the Ottoman Turks conquest of the region.