With one voice – defence of Palestinians’ rights to statehood and independence

Senate President Faisal Fayez on Saturday reaffirmed Jordan’s unwavering position in defence of Palestinians’ rights to statehood and independence on their own national soil, criticising those who he said are “trying to cast doubt” on the Kingdom’s historic positions.

The Palestinian issue has been at the top of the Kingdom’s priorities. Jordan, its army and its citizens have made great sacrifices in defending the Palestinian cause and the Palestinian people’s rights, while safeguarding Al Aqsa Mosque and the Islamic and Christian holy sites in Jerusalem.

“Jordan, under His Majesty King Abdullah’s leadership, is the most influential Arab voice, and almost the only one that rejects the so-called ‘Deal of the Century’, as it could affect our national constants and the constants of the Palestinians,” said Fayez.

Also on Saturday, Foreign Minister Ayman Safadi refuted as “baseless” talk and rumours about abolishing the legal disengagement from the West Bank, which took place in 1988. The issue has not been raised in the past or in the present, he noted, putting an end to all speculations in this regard.

This is not the time to entertain or spread rumours.

Jordan’s unwavering and well-documented position has been crystal clear and stressed from the very start. The Kingdom has been loud and clear in emphasising its principled position on the two-state solution as the only viable way to bring the Palestinian-Israeli conflict to a just and fair resolution.

Jordan has also asserted that anything that falls short of that solution would not bring about the much-needed peace in the region.

The Kingdom has always been at the forefront of defending Palestinians’ legitimate right to statehood and is constantly engaged in all international arenas in shedding light on the centrality of the issue.

As they have always been, all Jordanians are united behind their leadership and a united internal front is crucial to stand up to any challenges.

This is the time for the Arab world to endorse Jordan’s clear position and to support the steadfastness of the Palestinians on the ground.

This is the time for Arab states and the Muslim world to speak with one voice.

This is the time to curb the spread of rumours, as Jordan has put forward its stance on the Palestinian issue in the clearest way possible to the entire world, while firmly stressing its red lines and staunch positions. 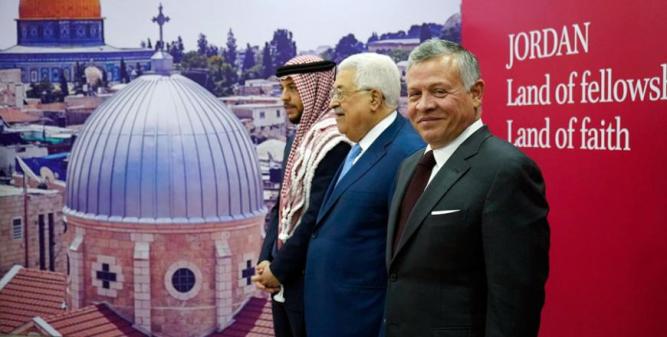