(RNS) — In October, a 16-year-old cross-country runner made headlines across the country when her fastest 5K of the season was disqualified from a local district meet because she ran while wearing a hijab.

One week after her disqualification, Noor Alexandria Abukaram was back at the finish line with a new personal record, once her coach had acquired a waiver for her to wear a hijab for the race. Last month, after the teen won support from prominent Muslim figures including Olympic medalist Ibtihaj Muhammad and U.S. Rep. Ilhan Omar, officials say they changed uniform regulations to allow student athletes to compete in religious headwear without requiring waivers.

But Abukaram, a junior at Sylvania Northview High School in eastern Ohio, isn’t finished yet. The athlete aims to remind the world that her case was no anomaly with a new initiative called Let Noor Run.

“Unfortunately, what happens is that people see this happened to me here in Toledo and decide ‘OK, yeah, this happens like once in a decade,’” Abukaram said. “But it’s not. It happens every single day to Muslim athletes around the country. This is bigger than me.” 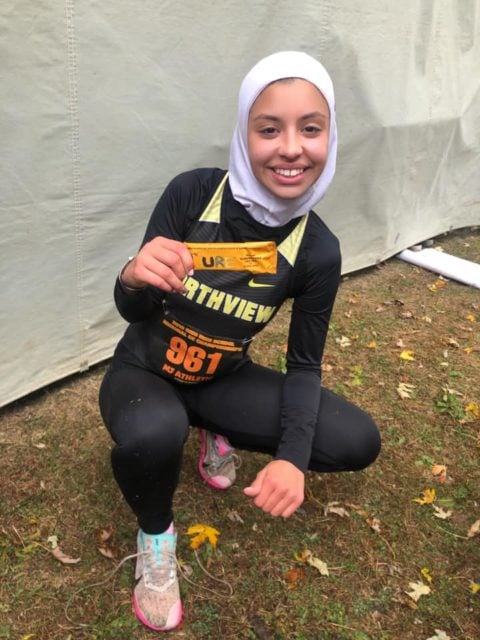 In its early days, the organization will focus on educating the public about the discrimination Muslim women face in sports and advocating for policy changes that promote inclusivity.

Later, she hopes to offer legal aid and media attention to “help expose the many faces of discrimination in sports,” Abukaram said — whether it’s a Muslim woman swimming in a burkini, or a black woman competing with natural hair, or a Sikh man wrestling in a turban. The teen has recruited a lawyer and press manager to her team in preparation.

Let Noor Run will kick off with an event on Friday (Jan. 24) at Lourdes University’s Franciscan Center in Sylvania, Ohio. Abukaram will speak on a panel alongside fellow hijab-wearing athletes Bilqis Abdul-Qaadir, who was the first Muslim woman in a headscarf to play NCAA Division I basketball, and Minnesota-based teen boxer Amaiya Zafar, who spent two years fighting for a waiver to wear a hijab while boxing.

Mother Mary is always with a Hijab in artist’s imagination. How can any open minded Christian be against Hijab? pic.twitter.com/DZuOrGGPFR