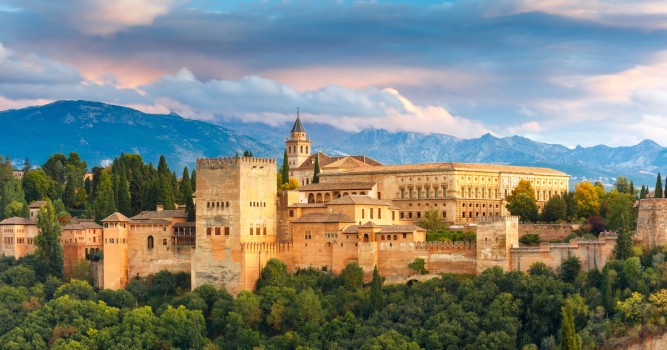 A dear friend of mine was planning to go to Spain. We exchanged some notes and he wanted me to read this book. In a few days the book arrived in the mail.

I had not heard about the book or the author before. My daughter had. The book has been sold more than 30 million copies. It has the Guinness World Record of being the most translated book by a living author.

The original book is in Portuguese and the writer is Paulo Coelho, a Brazilian. Traveling through Andalusia, he found his calling to be a writer. He never looked back.

What a book! It is easy and quick to read. It reminded me of the Tales of Alhambra by Washington Irving.  Old folklore stories retold by Irving talk about the lives of Andalusians. Long after the Moors were gone, there was still a fascination with them. They were thought to posses secret powers, left hidden secrets and had the power to converse with nature at a different level.

This book, the Al Chemist, takes that fascination to another level. It takes a young ambitious Andalusian shepherd, Santiago across the sea to Tangier, and then ultimately to the Pyramids.

Santiago, a shepherd by choice, wants to see the world. He loves to read books but is full of innate wisdom and learns from the nature and surroundings. He longs to see the girl he saw once and spends the whole year to get back to her. On the way destiny takes him on another path. He stumbles into a fortune teller and a self proclaimed king. He is told that he has to find his personal path and a hidden treasure is waiting for him at the Pyramids.

Taught to watch for the signs and omens, he embarks on a journey which takes him to far away lands, where he has failures and successes. He experiences closely the realities of life, learns from his own intuitions, masters new trades, helps others find their personal paths, travels across the desert, earns the trust of Arab chieftains, and finds the love of his life in Fatima, a girl of the oasis.

Although being sought by a fellow traveler, it is Santiago who wins the heart of the the Al Chemist, a bicentenarian living in the oasis,  who knows the art of turning lead into gold. The Al Chemist is convinced of the boys earnestness of desire, accompanies him through rest of the turbulent journey, and ultimately helps him reach the Pyramids, where the boy has to find his hidden treasure alone.

It is here, that he finds out the true meaning of treasure. It was always within his possession. He just have to go back and get it.

Highly symbolic, it tells the story of a relatively modern time, just one hundred year old, in a language of early post-Moorish era.

It is the story of finding one’s calling and as it says, when you are about to realizing your Personal Legend, the whole world conspires to help you.

You feel like you are reading a tale out of Arabian Nights, Alif Laila,

The popularity of the book tells me that in this day and age of artificial wisdom, there is still a longing rustic stories told in the simple language of heart.

Reading it took me back to my trip to Spain. You can read more about that in my future posts.