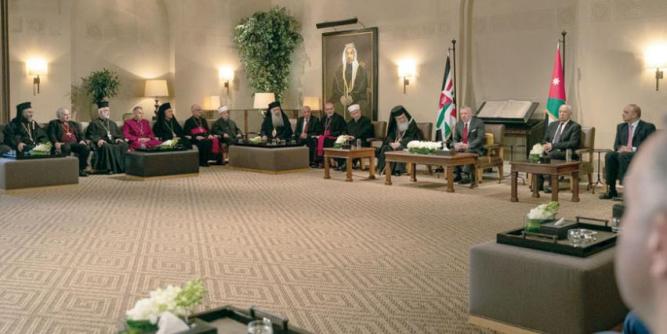 AMMAN — His Majesty King Abdullah on Monday received church leaders in Jordan and Jerusalem, and leading Jordanian Christian figures and representatives of Islamic and awqaf institutions at Al Husseiniya Palace.

Speaking at the meeting, the King expressed best wishes to Christians in Jordan, Palestine and the whole world on the occasion of the holiday season, stressing that Muslims and Christians in Jordan are one family working for the nation’s progress and prosperity, according to a Royal Court statement.

His Majesty reaffirmed the right of Jerusalem’s churches to preserve their property and holy sites, and to worship freely, adding that safeguarding the rights of Muslims and Christians in Jerusalem is a Hashemite duty and legacy.

The King expressed keenness to reach out to church leaders in Jordan and Jerusalem and representatives of Islamic and awqaf institutions, voicing his support and appreciation, the statement said.

For their part, speakers at the meeting highlighted the importance of the Hashemite Custodianship of Islamic and Christian holy sites in Jerusalem, describing it as the legitimate, authentic custodianship that emanates from the Hashemite legacy rooted in religion and history, according to the statement.

The speakers expressed appreciation for His Majesty’s role in defending Islamic and Christian holy sites in Jerusalem, commending the King’s efforts to promote interfaith harmony and coexistence.

In an address delivered on behalf of Patriarch Theophilos III, Patriarch of the Holy City and all Jordan and Palestine, Archbishop Christoforos Atallah, Greek Orthodox Archbishop of Amman, underscored Jordan as a role model for promoting peace and tolerance, as well as a beacon of stability in the region, the statement said.

Archbishop Atallah extended the greetings of Patriarch Theophilos III to His Majesty and the Jordanian people on the occasion of Christmas, stressing support for the Hashemite Custodianship and emphasising the King’s role in bolstering coexistence in the region.

Also speaking at the meeting, Jerusalem Awqaf Department Director Mohammad Azzam Khatib extended his greetings to His Majesty and all Arabs and Jordanians on the occasion of Christmas, according to the statement.

Khatib lauded the King’s firm support and protection of Jerusalem and its holy sites in his capacity as Hashemite Custodian, noting that the Hashemite Custodianship is the only legitimate guardianship accepted and appreciated by Jerusalemites, Muslims and Christians alike.

He added that despite the threat of Judaisation, Muslim and Christian Jerusalemites have formed a united front to counter the multitude of challenges facing the holy city.
Khatib said Jerusalemites will continue to protect their city with His Majesty’s unwavering support, leadership and guidance.

In his remarks at the meeting, Apostolic Administrator of the Latin Patriarchate of Jerusalem Archbishop Pierbattista Pizzaballa paid tribute to Jordan as a model of harmony, and an oasis and a meeting place for everyone, the statement said.