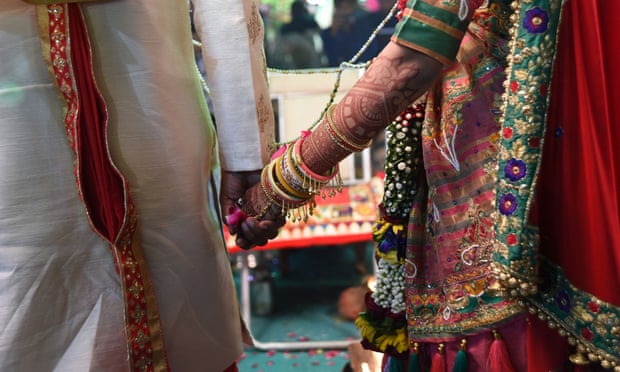 Cultural exemptions to New Zealand’s rules stopped in May, leaving many in the Indian community stuck. Photograph: Sam Panthaky/AFP/Getty Images

New Zealand has a reputation for offering a warmer welcome to immigrants than many other western nations, including its nearest neighbour, Australia. But the country’s Indian community has decried as racist a recent policy change that excludes – perhaps permanently – those entering arranged marriages from bringing their spouses to New Zealand.

It has also created a political tangle a year out from New Zealand’s elections – with one minister claiming the government had not been responsible for the immigration clampdown – and another claiming it as a personal victory.
While a couple does not need to be married in order to be reunited on a partnership visa in New Zealand, partners must prove they have lived together for 12 months. Officials had previously waived that requirement for those in special cultural circumstances – such as people entering arranged marriages, often from India, who had not lived together before their weddings.

But in May, the cultural exemptions suddenly stopped, and those with did not meet the requirements were refused visas to New Zealand. The Indian community said it was discrimination; on Sunday, in the largest city, Auckland, protesters rallied against the decision.

A lawmaker from the populist minor party, New Zealand First, in October threw fuel on the fire, telling Indians they should leave New Zealand if they did not like its immigration policies. Shane Jones, who told Radio New Zealand the Indian community had “no legitimate expectations in my view to bring your whole village to New Zealand”, was speaking about tighter rules for bringing parents to the country.

For the Indian community, it added insult to injury.

“What they are demanding is not possible within Indian culture. They’re expecting us to be living together in the same house, to have a proper married life together before getting married,” said Ankur Shokeen, 27. He and his wife had chosen each other after meeting several prospective partners arranged by their parents.
Advertisement

A visa application for his wife, Neha, 27, was declined in September, on the basis that the couple had not spent enough time together; he had returned to New Zealand for work following the wedding.

“I don’t know anyone who has been in that kind of relationship in India,” he said of New Zealand’s rule change. “It’s not acceptable in Indian culture.