‘Didn’t the Irish migrate to America? People need to look at it from this perspective’

New to the Parish: Imam Rabeeb Mirza and Ayesha Hasmin Mirza arrived from the UK 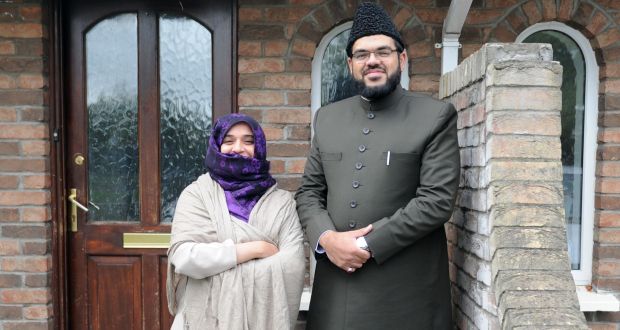 Rabeeb Mirza was 16 when he began training to become an imam. He had been studying for his A-levels at school in Mitcham in south London when he was offered a place at the Jamia Ahmadiyya institute of modern languages and theology in Surrey.

“It wasn’t something that I had pre-planned. My father did want me to pursue this life but never forced me into it. I had no plans of becoming an imam, I was actually thinking of studying zoology. But there was some turning point inside me which said I should go and serve my religion.”

Rabeeb spent seven years at the college learning Arabic, Urdu and Persian and following the teachings of the Mirza Ghulam Ahmad, who founded the Ahmadiyya strand of Islam in the late 1800s. When he was 24, following a few short stints in Liberia, Spain and Pakistan, he was sent to Ireland as a missionary. “I had thought I was going to be put in an office because generally I’m not very articulate. I get stage fright quite a lot. But you learn.”

To be fair, I never expected to marry a missionary, because I knew I would be moving around a lot… The comfort factor this time was the blessing from our holiness

The 29-year-old imam is speaking to me from behind a desk covered with books and papers in his small office in the Dublin mission house of the Ahmadiyya Association of Ireland. Beside me sits his wife, Ayesha Hasmin Mirza, who moved to Ireland in spring this year after the couple were married.

Like her husband, Ayesha grew up in south London, going to school in Wimbledon. When she was a teenager her family moved to Saudi Arabia. “At first going there was different because of the culture and way of life. It was also different as a woman but I actually found it very peaceful and respectful and made life-long friends. You get used to it after a while.” She returned to the UK after school to study sociology at the London School of Economics and went on to train as a teacher and work in a primary school.

In February the couple were introduced to one another through a matchmaking process organised by the current Ahmadiyya spiritual leader, Mirza Masroor Ahmad, and with the support of their families. They had both seen pictures and read a small biography of each other before meeting in person. The pair had previously had a number of proposals from other prospective partners but refused the offers. However, this time they both agreed it was the right match and the following week they were married.

“To be fair, I never expected to marry a missionary because I knew I would be moving around a lot,” says Ayesha. “I had lots of suggestions [for marriage] before that and my mum was starting to wonder and get worried about me. But the comfort factor this time was the blessing from our holiness [Masroor Ahmad].”

As an Ahmadiyya missionary for the Leinster region and part of Munster, Rabeeb’s role includes setting up a stand on O’Connell Street each week to talk to passers-by about his religion. “At first it was difficult because you have all this knowledge but you don’t know how to present it. But slowly and steadily you learn how to deal with various people. Generally people are positive but you do get negative responses. Sometimes people abuse you, and it is painful when you’re called a terrorist.”

“The media is often responsible for the views of people; sometimes they have just seen something on TV and base their entire view of Islam on that specific broadcast. We just have to be patient and calm and explain that Islam is a religion of peace.”

“We are more than happy that people ask about our religion because we want to tell them that groups such as Isis, al-Qaeda and Boko Haram have nothing to do with Islam. They’re all based on geopolitics.”

Young men and women who do join up with these groups do not understand the true meaning of Islam, he says. “They’re frustrated and they want money. But they need to realise that they will never achieve what they want through violence and bloodshed. They only way we will achieve peace is to learn to live with one another.”

The Irish Ahmadiyya Muslim community made headlines in July after their Maryam mosque in Galway city was badly vandalised. Like all members of the small Ahmadiyya community, Rabeeb and Ayesha were shocked by the attack. “We were devastated that such a thing could happen because we know the Irish are good-hearted and genuine people,” says Rabeeb. “But we also know now that this dialogue that is taking place everywhere is empowering far-right movements.”

Most people see immigrants are a vital part of society. Didn’t the Irish migrate to America when the Famine happened? People need to look at it from this perspective as well

Rhetoric from leading political figures such as Donald Trump encourages this violent behaviour, he says. “These people believe they have been given some sort of validation. These right-wing groups are as much terrorists as Isis and al-Qaeda. But we say to anyone who has misconceptions to come and speak to us.

“What is it that you actually fear? There is this concept that we are going to impose Sharia law. No. Islam does not believe in a theocracy. As the holy Koran says, you have to abide by the laws of the country you live in. Love for your country is an integral part of faith.”

Rabeeb recently read an article that said 80 per cent of Irish people regard immigration as a positive thing for Ireland. “Most people see that immigrants are a vital part of society. Didn’t the Irish migrate to America when the Famine happened? People need to look at it from this perspective as well.”

The couple are content living in Dublin and often take trips around the country to visit some of the 450 other members of the Ahmadiyya community. Ayesha would like to return to teaching, even on a voluntary basis. However, as a missionary, Rabeeb could be sent to his new posting any day.

“Ireland is definitely my second home now. It will always hold a special place in my heart because it was my first posting,” he says. He hopes that whenever he does leave, he will have played a small role in helping Irish people understand the teachings of his religion.

“We need to accept that while there are different religions, creeds and ethnicities, we need to respect each other. To the people of Ireland I say you don’t need to fear Muslims. We are human beings just like you.”

We would like to hear from people who have moved to Ireland in the past 10 years. To get involved, email newtotheparish@irishtimes.com or tweet @newtotheparish