Obama: What Muhammad Ali meant to me 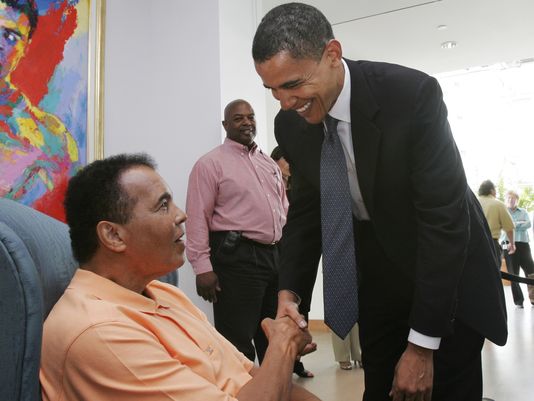 In 2006, Muhammad Ali greets then-U.S. Sen. Barack Obama at the Muhammad Ali Center. Obama called Ali “the quintessential American, with the ability to overcome barriers and to remake himself as a symbol of reconciliation.” (Photo: Sam Upshaw, Jr., The Courier-Journal)  The Muslim Times has the best collection to refute Islamophobia and racism

In 2010, in celebration of Muhammad Ali’s 50 years on the world stage, President Barack Obama penned for USA TODAY Sports the following essay on what Ali has meant to him:

It was the winter of 1959, six months before he would take the sport of boxing by storm at the Rome Olympics, and Cassius Marcellus Clay Jr. was on the move. Rising at 4 in the morning, before the first glimmer of daylight broke the horizon, Clay would put on his sweats, lace up a pair of old steel-toed Army work boots, and run out into the biting cold. He would crisscross his beloved Louisville, often racing the school bus for 20 blocks down Chestnut Street. “Why doesn’t he ride to school like everybody else?” one student asked. “He’s crazy,” replied one of Clay’s classmates. “He’s as nutty as can be.”

As the world would come to know, that young man would always chart his own course. I was too young to remember Clay before he became Muhammad Ali, when he was not only the heavyweight champion of the world but also at times the object of controversy and even scorn. And I was still in grade school when Ali made his extraordinary comeback after nearly four years of exile and later shocked the world by winning his title back.

It was this quality of Ali’s that I have always admired the most: his unique ability to summon extraordinary strength and courage in the face of adversity, to navigate the storm and never lose his way.

This is the quality I’m reminded of when I look at the iconic photo I’ve had hanging on my wall of the young fighter standing over Sonny Liston. And in the end, it was this quality that would come to define not just Ali the boxer but Ali the man — the Ali I know who made his most lasting contribution as his physical powers ebbed, becoming a force for reconciliation and peace around the world.

We admire the man with a soft spot for children, who, while visiting a hospital in Philadelphia many years ago, picked up a boy with no legs. Gazing into the child’s eyes, Ali said, “Don’t give up. They’re sending men into space. You will walk someday and do this,” and proceeded to do the famous Ali Shuffle with the giggling boy in his arms.

We admire the man who has never stopped using his celebrity for good — the man who helped secure the release of 14 American hostages from Iraq in 1990; who journeyed to South Africa upon Nelson Mandela’s release from prison; who has traveled to Afghanistan to help struggling schools as a United Nations Messenger of Peace; and who routinely visits sick children and children with disabilities around the world, giving them the pleasure of his presence and the inspiration of his example.

And we admire the man who, while his speech has grown softer and his movement more restricted by the advance of Parkinson’s disease, has never lost the ability to forge a deep and meaningful connection with people of all ages.

Asked why he is so universally beloved, he holds up a shaking hand, fingers spread wide, and says, “It’s because of this. I’m more human now. It’s the God in people that connects them to me.”

This is the Muhammad Ali who inspires us today — the man who believes real success comes when we rise after we fall; who has shown us that through undying faith and steadfast love, each of us can make this world a better place. He is, and always will be, the champ.