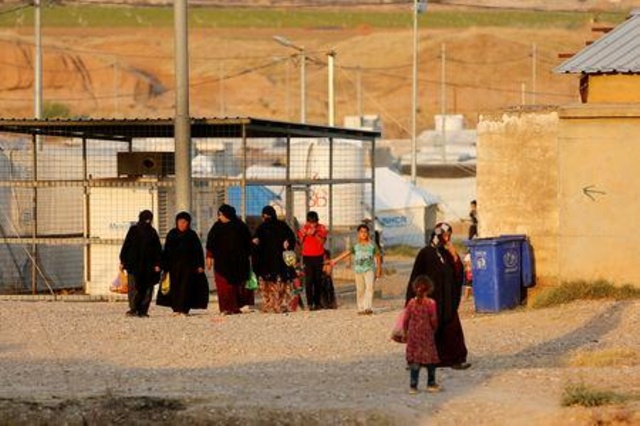 Displaced Iraqi women, who return to camp after trying to go home and find the conditions in their towns unbearable, with lack of services and destroyed buildings, are seen getting out from the bazar at Hassan Sham camp, east of Mosul, Iraq July 29, 2019. REUTERS/Abdullah Rashid
(reuters_tickers)

HASSAN SHAM CAMP, Iraq (Reuters) – Despairing of the corpses and debris littering the streets, many Iraqis have left their homes in areas liberated from Islamic State two years ago and voluntarily returned to the displacement camps that housed them during and after the fighting.

The militants seized large swathes of the country in 2014 and were finally defeated in December 2017. The northern Nineveh province, particularly its capital Mosul and its Old City district, saw some of the worst fighting.

“I saw havoc in the Old City. All houses and building are in complete ruin. I saw in my own eyes corpses. I saw a hand of a woman,” said Sabiha Jassim, 61, who has since gone back to the Hassan Shami camp for displaced people.
Jassim says she also left because there was no drinking water or access to medical treatment for her ailing husband, both of which are available at the camp.

In Hassan Sham camp alone, more than 200 families like Jassim’s have returned this year after having initially gone home. Local officials said many had done so but refused to provide a complete figure.

Islamic State militants ravaged and looted the areas they occupied, leaving behind houses, mosques, and churches in ruin. Some have gone underground and are still active in these areas.

Bodies and destroyed buildings are still a regular sight two years on. In contrast, the camps provide residents with security and comparatively comfortable lives.

“People prefer to live in the refugee camp rather than to stay in Mosul because they say that there is security in the camp. In addition to that means of living are available in the camp more than in the city of Mosul,” said Mahabad Abdul-Haqi, the Hassan Sham camp deputy director.

The central government says it will need up to $100 billion to rebuild Mosul but local officials say it has not done enough.

“Government offices do not provide adequate services, and residents are suffering. Everything in Nineveh province is unnatural. People see only its appearance, not its essence. If life were really normal in the province, I don’t think a citizen would leaves their home or city,” said Ali Khudier, a member of the Nineveh provincial council.

“I know well that Mosul residents love their city like their soul, but people start quitting on even their souls because of Mosul’s deteriorating conditions and quality of life.”

Even Iraqis who were once affluent find themselves returning to the camps in search of a better life.

“My husband was a goldsmith, we were rich but because of the current conditions, things turned upside down. So, I was forced to come back to the camp because I don’t have a source of income,” said Aisha Ahmed who now resorts to selling her share of government-provided rations for $8 to get by.

“No one helps, neither from the government or rich people. And even the rich have become poor in such circumstances. I didn’t see assistance, so I decided to come back to the camp.”