Role of Religion in the West versus Indonesia

Most Americans (58%) say religion plays a less important role in the U.S. than it did 20 years ago. But this is not true everywhere — an even bigger majority of Indonesians (83%) say religion’s influence has grown in their society: https://t.co/MnCcKAit88 pic.twitter.com/ODfAebbFCu

Recent studies document younger adults being less religious than older generations and the global religious profile changing as the population grows. Across 27 countries surveyed, more think religion plays a less important role than a more important role compared with 20 years ago, but there is substantial regional variation on this question. About two-in-ten say there has been no change.

Adults in the Asia-Pacific region are split on the role religion has to play in their societies. More than half in Indonesia (83%), the Philippines (58%) and India (54%) believe that religion has a bigger impact on their nation today than it did 20 years ago. Seven-in-ten or more in all three of these nations say religion is very important in their lives, which is related to views about the importance of religion. (See Overview for more on the connection between responses to the question of religious importance and whether religion has a more important role to play.) However, in South Korea, Japan and Australia, people tend to say religion has become less important or there has been no change.

Meanwhile, a 65% majority in Nigeria thinks religion plays a more important role in their country, while 60% of Kenyans say the same. Notably, large majorities in these countries (96% and 93%, respectively) say religion is very important in their lives.

Education level plays a role in how some sub-Saharan African and Latin American respondents evaluate the importance of religion. Across these two regions, adults with more education are less likely to say religion plays a more important role than it did 20 years ago. This educational divide is particularly pronounced in Brazil, where there is a difference of 15 percentage points, Nigeria (14 points) and Argentina (12 points).

Globally, more favor than oppose an increased role for religion

Around the world, more favor an increased role for religion in their countries than oppose it. A median of almost four-in-ten (39%) are supportive of this change. A median of just over one-in-ten (13%) are opposed to the increasing role of religion, but this can mask particular concern in Europe, where sentiment about the role of religion is mixed.

Roughly one-third of adults in Europe (median of 32%) favor a more important role for religion, while a similar percentage (33%) are opposed. About half of Swedish adults (51%) are particularly concerned about the more important role of religion, as well as 47% of French adults and 45% of the Dutch.

Publics in other regions of the world are generally more favorable of a more important role for religion, including 51% in the U.S.

A median of 44% across the seven Asia-Pacific countries polled favor a greater role for religion in their nations. This view is especially prominent in Indonesia (85%), the Philippines (58%) and India (53%). The big exception in the region is Australia, which is divided on the role of religion in their society. 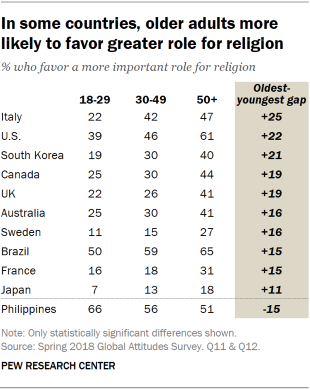 Elsewhere, roughly seven-in-ten Tunisian adults (69%) favor an increased role for religion. But in Israel, only 39% welcome a greater role for religion in their country, while 32% are opposed to that change. Among the nations surveyed in Latin America, a majority of Brazilians (59%) favor a more important role for religion, while support is lower in Mexico (42%) and Argentina (39%).

Older adults are more supportive of a more important role for religion in 10 countries. The biggest age difference is in Italy, where there is a 25 percentage point gap between older and younger Italian adults.

But this age gap also exists in both Canada and the U.S., where there are gaps of 19 and 22 percentage points, respectively, between those ages 18 to 29 and those 50 and older.

The notable exception to this trend is the Philippines, where young adults are 15 points more likely to approve of an increased role for religion.