One church, two popes: why Catholicism is in crisis this Easter

In his pre-Easter address to pilgrims gathering in Rome, Pope Francishighlighted Jesus’s words as he died on the cross on the first Good Friday: “Forgive them, Father, for they know not what they do.” We all, the Argentinian pontiff stressed, need to find the courage to forgive those who have wronged us.

Those remarks sparked speculation about who exactly Francis was struggling to forgive. Top of most lists in Rome this Easter is his predecessor, Pope Emeritus Benedict XVI, who decided in 2013 to break with 600 years of work-unto-death papal tradition and retire. This opened Catholicism’s door to the breath of fresh air that is Francis. And, for the past six years, as the winds of change have blown through the church, Benedict has by and large kept a respectful silence, ignoring the ever louder pleas of traditionalist Catholics who want the 92-year-old to join them in opposing Francis’s reform agenda. 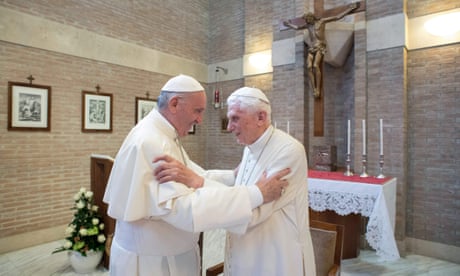 That changed earlier this month, when Benedict published a 6,000-word article in a German magazine. It made headlines by blaming the clerical abuse scandal on the moral relativism of the 1960s sexual revolution, and the “homosexual cliques” that allowed this “lawlessness” to infect seminaries. It is a line of argument that directly – and, conservative cardinals insist, pointedly – contradicts all Francis’s efforts (including a summit of world bishops in the Vatican in February) to tackle the damage done by paedophile priests by pointing the finger at a dominant culture within the church; a culture that encourages priests and bishops to operate as if they are above the moral guidelines they preach, and regard themselves as beyond the sanction of civil courts.

Neither explanation has convinced some lifelong Catholics who, as a result this Easter, will stay away from church services. The Francis version at least has the virtue of not flying in the face of all contemporary research, which doesn’t conflate sexual attraction between consenting adults of the same gender with the brutal and systematic violation of children.