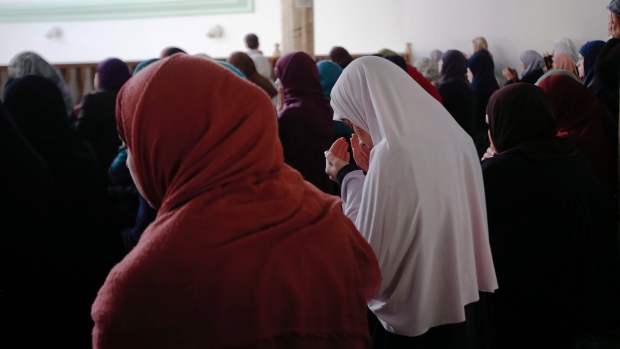 Muslim women pray in a balcony inside Hasan Beg mosque during the Friday prayer in this Nov. 9, 2018 file photo.

In the face of increasing Islamophobia, a group of Muslims in Toronto is vowing to reclaim the mosque as a sacred and safe space for women.

The Women’s Mosque of Canada marked its first prayer meeting in Toronto Friday, in an effort to build an inclusive space for Muslim women to practice their faith, and heal from Islamophobic attacks that organizers say plague the community daily.

“There are women, including myself, that have experienced gender islamophobia and been attacked,” Farheen Khan, co-founder of the Women’s Mosque of Canada, told CTV News by phone shortly before the organization’s first prayer began at Trinity-St. Paul’s United Church.

“We want to be in a place where we can be safe; a space to connect with each other and heal.”

By offering bi-weekly Friday prayers—for women, by women  —Khan says organizers hope to create a community that not only supports its members’ faith, but breaks down social barriers that fuel anti-Muslim sentimentsas well.

The efforts come after several prominent attacks on mosques, including the deadly attack in New Zealand last month, and the Quebec City mosque attack in 2017.

“It feels like there has been an attack on the sanctity of the mosque,” Khan said of the violence.

The biggest increases were seen in Ontario and Quebec where police-reported hate crimes involving Muslims increased by 207 per cent and 185 per cent, respectively.

“When analyzing this data, it’s equally important to consider what the data does not show,” said Ihsaan Gardee, executive director of the National Council of Canadian Muslim (NCCM) in 2018.

“The numbers don’t tell the story of victims who are targeted because of multiple aspects of their identity.”

The congregation met at Trinity-St.Paul’s United Church in Toronto for the inaugural meeting.

In addition to organizing Ramadan celebrations and workshops, Khan says the group hopes the Women’s Mosque of Canada will grow to cities outside of Toronto. Both Muslim women and their allies are welcome to attend.

“We really are a peace loving community. We want to spread love not hate, despite anti-Muslim conversations,” she said.

“We’re going to continue to wear our headscarves and practice our faith.” https://www.ctvnews.ca/canada/a-place-where-we-can-be-safe-women-s-mosque-of-canada-opens-in-toronto-1.4387171