High-profile Muslims have a right not to expect an inquisition

Attacks on a young US congresswoman, Ilhan Omar, show Muslims are expected to prove their liberal credentials 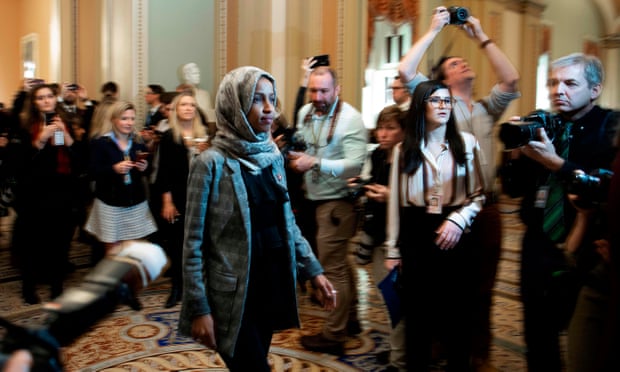 ‘Because she is a Muslim, her opinions are distorted into a sinister shape.’ US Congresswoman Ilhan Omar in Washington DC last week. Photograph: Jim Watson/AFP/Getty Images

There is an interrogation that begins whenever a Muslim assumes any role in the public eye, a sort of Muslim inquisition. One can be a writer or a politician or a chef, and be asked questions that have nothing whatsoever to do with the matter at hand. Do you think homosexuality is a sin? What do you think of underage marriage? Do you think Israel has the right to exist? These questions are also asked in spurious surveys commissioned in the hope of generating headlines that suggest the majority of Muslims are violently homophobic, or conform to whatever latest trope is doing the rounds.

In the US, this persistent questioning continues despite the fact that Muslims are growing more liberal (specifically, more accepting of homosexuality than their white evangelical Christian counterparts) while simultaneously suffering increased levels of discrimination. But in the inquisition it’s the questions, not the answers, that are truly revealing.
All Omar had done to deserve this outrageous association was to express opinions on Israel

The interrogators assume the innocent air of people who are “just asking”. But answering their questions accepts their premise, which is that every Muslim’s values are deservedly an object of suspicion until they can prove their liberal credentials. In Britain I’m a veteran of the Muslim inquisition. Often, when I’m warning that the right uses Islamist terror to justify anti-immigrant prejudice, I get asked whether I condemn terrorism. Think it’s wrong to blame migrants for events unrelated to them? Then you must love terrorism! What I have learned, in the words of the computer in the film WarGames, is that the only winning move is not to play.
There was a classic example of the Muslim inquisition at work last week in the US. A congresswoman, Ilhan Omar, was tagged by the representative Lee Zeldin on Twitter, in a message in which he uploaded a vile antisemitic voicemail he had received. “This new VM just came into my office. @IlhanMN,” he wrote. “This is just another day in my world as an American Jew in Congress. Would love to know what part of this hate filled, anti-Semitic rant you disagree with? I disagree with all of it. Do you?” He was just curious, you see. He was just asking whether a Muslim congresswoman agrees with an anonymous voicemail, sent by someone unknown to her, who thinks that Hitler should have finished his job.

All Omar had done to deserve this outrageous association with a vile voicemail from a complete stranger was to express opinions on Israel. In 2012 Omar said that Israel had “hypnotised” the world to its “evil doings” in Gaza. The New York Times’s Bari Weiss wrote an extensive piece detailing why the word “hypnotised” has antisemitic connotations and history. Omar said she had been unaware of that, and withdrew the word. That’s it. That is her biggest transgression. Along with many others on the left, she supports the BDS (boycott, divestment, sanctions) movement, but has questioned its efficacy, and she argues that the US should “call out Israel” for transgressions, in the same way as it “calls out Iran”. But because she is a Muslim, and a Muslim’s place in western public life must always be subject to scrutiny, her opinions are distorted into a sinister shape. The aim is to suggest she is simply too far beyond the pale to hold a position of responsibility.

Given the spike in antisemitic hate crime since Donald Trump became president, it might have been more relevant for Zeldin to ask him if he sympathised with antisemitic abuse. But inquisitions are not honest exercises – they are precursors to purges.

What Omar is being subjected to is only a subgenre of a wider smell-test for interlopers. The Democrats’ new intake last year saw more young, female, Muslim, non-white and non-establishment figures take office. Immediately they came under sustained attack for not fitting the mould. Every move made by the 29-year-old Democratic congresswoman, Alexandria Ocasio-Cortez, has made has been scrutinised for excessive immaturity, excessive female ditziness and excessive radicalism. To be respected by their peers in congress, or even just ignored by them, Ocasio-Cortez and Omar must smooth out their edges into complete uniformity.

Even the Democrat Aaron Sorkin said that he really likes “the new crop of young people who were just elected to Congress. They now need to stop acting like young people.” The business of politics in the US smooths the passage of an intemperate, inexperienced bigot to the highest office, but it balks at the straight-talking of those who do not stick to the script on banner political policies such as taxation and support of Israel; policies around which there has been a sterile consensus for far too long.

And even when they are polite and gracious under fire, even when they are adept at managing the inquisition, this will not placate those who will be satisfied only by their elimination. Omar replied to Zeldin that she thought the voicemail was “heinous”, and invited him to discuss the abuse they both get over a cup of Somali tea, but still this was not enough. “Let’s do that!” he replied, before pressing: “Are you saying you disagree w/everything said in that voicemail?” The questions will never stop, even when they are answered. The only winning move is not to play.

• Nesrine Malik is a Guardian columnist