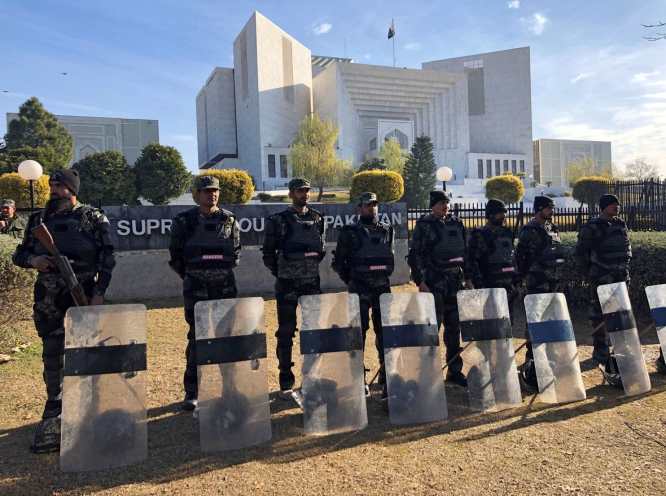 ISLAMABAD, Pakistan — Pakistan’s Supreme Court on Tuesday upheld its decision to acquit a Christian woman on charges of blasphemy that kept her on death row for eight years, clearing the way for her to leave the country.

Asia Bibi, 47, was released from prison in November and taken to a secure, undisclosed location for her safety, according to authorities. She may now leave Pakistan and is expected to join her daughters in Canada, where they were granted political asylum.

The court originally acquitted her on Oct. 31, prompting three days of paralyzing street demonstrations and death threats against the judges responsible for the decision. Bibi’s lawyer fled the country at the time but later returned for the final hearing after it was appealed.

Qari Mohammed Salaam, the Muslim prayer leader from Bibi’s village, filed the petition to review the decision. His lawyer said the court should be expanded to include Islamic scholars.

Chief Justice Asif Saeed Khosa told the court Tuesday that the petitioner “was not able to point out any mistake in the Supreme Court verdict acquitting Asia Bibi,” according to Pakistan’s Dawn news channel.

“The beauty of a Muslim community is that non-Muslims are taken care of,” the chief justice added.

Bibi’s case strikes at the heart of one of the most controversial issues in Pakistan, its strict blasphemy laws that have often been wielded against minorities, including an estimated 3 million Christians, in this Sunni Muslim majority nation of over 200 million.

Just the accusation of blasphemy is often enough to motivate lynch mobs. No one charged with blasphemy has yet been formally executed under the law.

Bibi, a farmworker and mother of five, was accused by co-workers of insulting the prophet Muhammad in a dispute over sharing water in a sweltering hot field. Bibi denied the charge.

At one point, a provincial governor defended Bibi and questioned her treatment under the law. He was assassinated by his own bodyguard, Mumtaz Qadri. After Qadri was executed for the murder, he was lionized as a martyr by the anti-blasphemy movement, and his shrine has become a pilgrimage site.

The court ultimately ruled that the accusations against Bibi were fabricated and flimsy, and she was acquitted.

Members of the anti-blasphemy movement have said they would protest anew any decision to uphold the acquittal.

Security was heavy in Islamabad on Tuesday at the Supreme Court and around the city with police and paramilitary troops stationed at sensitive points.

Police have also been on high alert across Punjab province, the focus of last year’s riots over Bibi’s acquittal.

Paul Schemm in Addis Ababa, Ethi­o­pia, contributed to this report.