The Canadian prime minister was confronted by a man who claimed Muslims “want to kill us.”

At a town hall in Saskatchewan on Thursday, an attendee challenged Canadian Prime Minister Justin Trudeau about why his administration has admitted many Muslim refugees, claiming that “they want to kill us.”

In response, Trudeau launched into a passionate defense of Canada’s “extraordinary diversity,” saying that its welcoming stance towards refugees is “one of the things that has made Canada great.”

“We are welcoming people who are being turned away from other countries for the wrong reasons and it is an incredible benefit to Canada,” Trudeau said during the town hall at the University of Regina. “We are still understanding that immigration is an economic benefit to Canadians. It makes our communities more resilient, it makes our country stronger and it will continue to.”

The question about immigration came from an audience member who said his family had been living in the Regina area for generations. The man asked Trudeau what he was doing about Canada’s “open border.”

“You’re talking about my freedom and everybody’s lives … everybody who put their life down on the line, and you’re saying, ‘Eh, it’s OK, it won’t happen to us,’” the man said. “It’s happening in France and it’s happening all over.”
“The people are saying no, because these two cultures will not mix,” the attendee added.

The man specified that the “cultures” he was talking about were Islam and Christianity ― a statement that elicited boos and heckling from the crowd.

“They’ve openly stated they want to kill us, and you’re letting them in,” the man told Trudeau.
After pausing to collect his thoughts, Trudeau said, “Canada is a country that was built by immigrants.”

The prime minister then delivered a brief history lesson, pointing out that the land had first been home to indigenous First Nations people before “waves” of Europeans fleeing religious persecution and wars arrived to “build better lives for themselves.”

“These people always want the same thing: To be able to live in peace and raise their families, to create a better future for themselves and their communities,” Trudeau said. “This is what generations and generations of folks have done in Canada.” 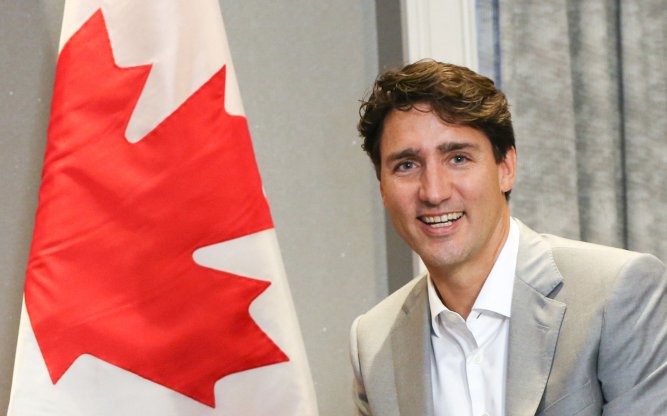 TORONTO, ON – SEPTEMBER 23: (NO UK SALES FOR 28 DAYS) Prince Harry meets Canadian Prime Minister Justin Trudeau on day 1 of the Invictus Games Toronto 2017 on September 23, 2017 in Toronto, Canada. The Games use the power of sport to inspire recovery, support rehabilitation and generate a wider understanding and respect for the Armed Forces. (Photo by Pool/Samir Hussein/WireImage)