A Rohingya girl’s journey from refugee camps to college 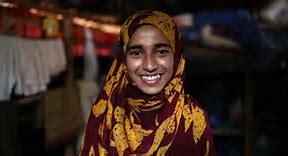 Formin Akter, a Rohingya refugee girl, smiles as she poses for a picture before heading to Chittagong to attend school at the Asian University for Women, in Cox’s Bazar, Bangladesh, August 24, 2018. REUTERS/Mohammad Ponir Hossain

Formin was 18. She was sitting on a plastic stool in a bamboo shelter at a refugee camp in Bangladesh. Like the hundreds of thousands of Rohingya refugees around her, she and her family had fled a campaign of mass murder, rapes and arson in Myanmar the previous year.

By then, I had spent nearly a year making reporting trips to the refugee camps, interviewing girls Formin’s age, many survivors of rape and sexual assault. Women and girls at the Rohingya camps are usually seen fanning cooking pots, cradling babies or tending to their family inside bamboo shelters. Most from the long-persecuted community who live at the camps are illiterate, and the few who did manage to study in Myanmar often only speak Burmese