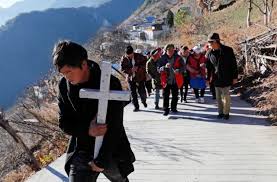 “Since birth, I have attended church and read holy scriptures in Tibetan,” Ruanna said in her home of Cizhong, where Christmas celebrations are on par with Lunar New Year festivities.

Despite the devotion of older Catholics, church leaders and some parents say it is less so among younger villagers.

“There is a real crisis of faith at this time. Basically no young people are joining,” Yao Fei, the village priest, told Reuters. “It’s something that makes me really anxious.”