What Israelis say: A Different Perspective on the Temple Mount Crisis

EXECUTIVE SUMMARY: Moderate leaders warn that the Israeli-Palestinian conflict may turn from a national conflict into a religious one. Right-wing leaders claim it has been a religious conflict from the start. Both approaches have been applied to the Temple Mount crisis, and both are affected by a totalist perception of the understanding of the religious imperative.

For years, moderate leaders have warned that the Israeli-Palestinian conflict could turn from a national conflict to a religious one. In turn, right-wing leaders have responded that the conflict was religious from its inception. So, too, on the issue of the Temple Mount: “The Left prefers to view the conflict as a territorial issue since its political tools, mostly imported from other places, can only deal with the territorial aspect of the conflict” (Ofri Ilani, Ha’aretz, July 2017). On the other hand, Shvi’i weekend newspaper voices the position of the religious right: “This is a religious war. Only in Israel are Arab Islamist murderous acts attributed nationalistic motives. It is simply more palatable, as a political conflict has the potential for a solution, while a religious struggle is total.” (Amnon Shomron, July 2017).

A slightly different perspective is suggested here. Between the two positions, one that seeks to guard against slipping into a religious conflict and one that declares that it was entirely about religion from the outset, a common conceptual basis exists: both positions have a similar grasp of the essence and logic of religious faith, which is interpreted from a modern perspective. Both approaches share a totalist conception of the understanding of the religious imperative, as if obedience to God’s command almost inevitably leads one to extreme ends. Hence the shared understanding of the two approaches: that the closer the conflict slips towards the realm of religious motivation, the less likely it is to be pragmatically managed.

At this point, however, it is Iranian political conduct, of all things, that presents a different logic. In 2014, before Ramadan, at the height of negotiations between Iran and the West on the nuclear issue, President Rohani spoke at a religious summit. He explained Iran’s position by saying, “Heroic flexibility is sometimes superior to jihad.”

From a modern perspective, experts explained, Rohani was revealed here as a pragmatic statesman. Under the circumstances, thinking rationally, he had set aside the command of jihad and accepted the considerations of practical wisdom. From a religious point of view, however, one can interpret his words in the opposite manner. The practical difficulties, which were also created by the will of God, were the consideration that dictated pragmatic flexibility. The religious commandment was not set aside by Rohani, but rather interpreted in light of the complex obstacles that stood in his way. His very reference to context and circumstances is, from his religious point of view, the supreme expression of his faith in the will of God.

Uri Goldberg, in his book Thinking Shi’a, emphasized the difference between traditional Shi’a thinking (conducted under a conscious absence of an explicit revelation of the will of God) and modern religious thought, which constitutes the new religious fundamentalism. In addition to the common perception that views religious fundamentalism as a modern phenomenon, as a counter-reaction to modernity itself, Goldberg emphasized another aspect. Similarly to modern man who believes that by the power of wisdom one can reach an understanding of the universe, so too the modern religious fundamentalists desire to proclaim their ability to attain the knowledge of God’s will and to interpret it in practical life.

Such religious fundamentalism can indeed block any pragmatic flexibility. Radical Islamic thought was expressed both in Shi’a and Sunna beliefs – for example, by Khomeini in Iran, or by Abdullah Azzam under his spiritual leadership in the struggle against Afghanistan. Both contained a sensitive expression of the believers’ duty to clarify, precisely out of reality’s difficulties, their tasks for the fulfillment of their religious duty.

Religious motivation is thus not necessarily total. It is open to dynamic interpretation, and it is precisely at that intersection that a meeting place can be found for a de-escalating equilibrium.

The perspective of conflict governed by religious logic shifts in the prevailing discourse between two points of view. Either the use of religion is presented as a manipulation to mobilize the masses and exploit religious power for political purposes in a national struggle; or religious motivation is identified as authentic, but presented as engaged within the realm of emotion – which supposedly makes it irrational. Both approaches would prefer to maintain a political sphere of conduct that is as clear as possible of religious motivation. It is not religiosity that must be excluded from rationality; it is modernism that must be excluded.

This piece was first published in The Liberal on 8 August 2017.

Maj. Gen. (res.) Gershon Hacohen is a senior research fellow at the Begin-Sadat Center for Strategic Studies. He served in the IDF for forty-two years. He commanded troops in battles with Egypt and Syria. He was formerly a corps commander and commander of the IDF Military Colleges. 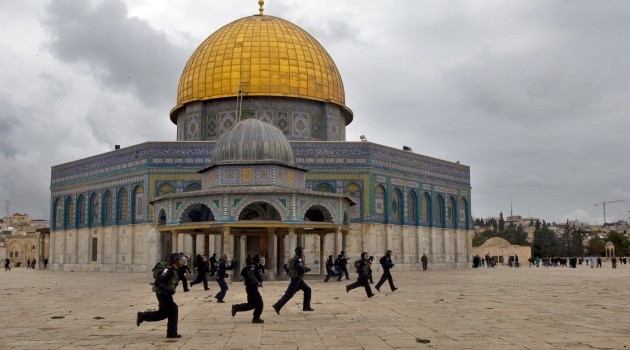 GETTY IMAGES
Whose City? Violence flared on the Temple Mount as Israelis celebrate — and Palestinians mourn — the Israeli seizure of East Jerusalem.