Japan to attempt robot landing on asteroid 186M miles away 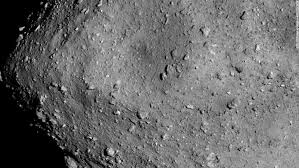 (CNN)Japan’s space agency will attempt to land a robotic unmanned landing craft on the surface of an asteroid 300 million-kilometers (186.4 million-miles) away from Earth next month.

The Hayabusa-2 spacecraft is currently orbiting around the diamond-shaped asteroid Ryugu, which it reached in June after a three-and-a-half year journey.
On September 21, the spacecraft will deploy the first of two landers onto the asteroid itself, where they will gather samples and conduct experiments. A second lander will be launched on October 3.
Later in the mission, the spacecraft itself will land on the asteroid after blowing a small crater in it using explosives, so samples can be gathered from below the object’s surface which have not been exposed to space.
Read more